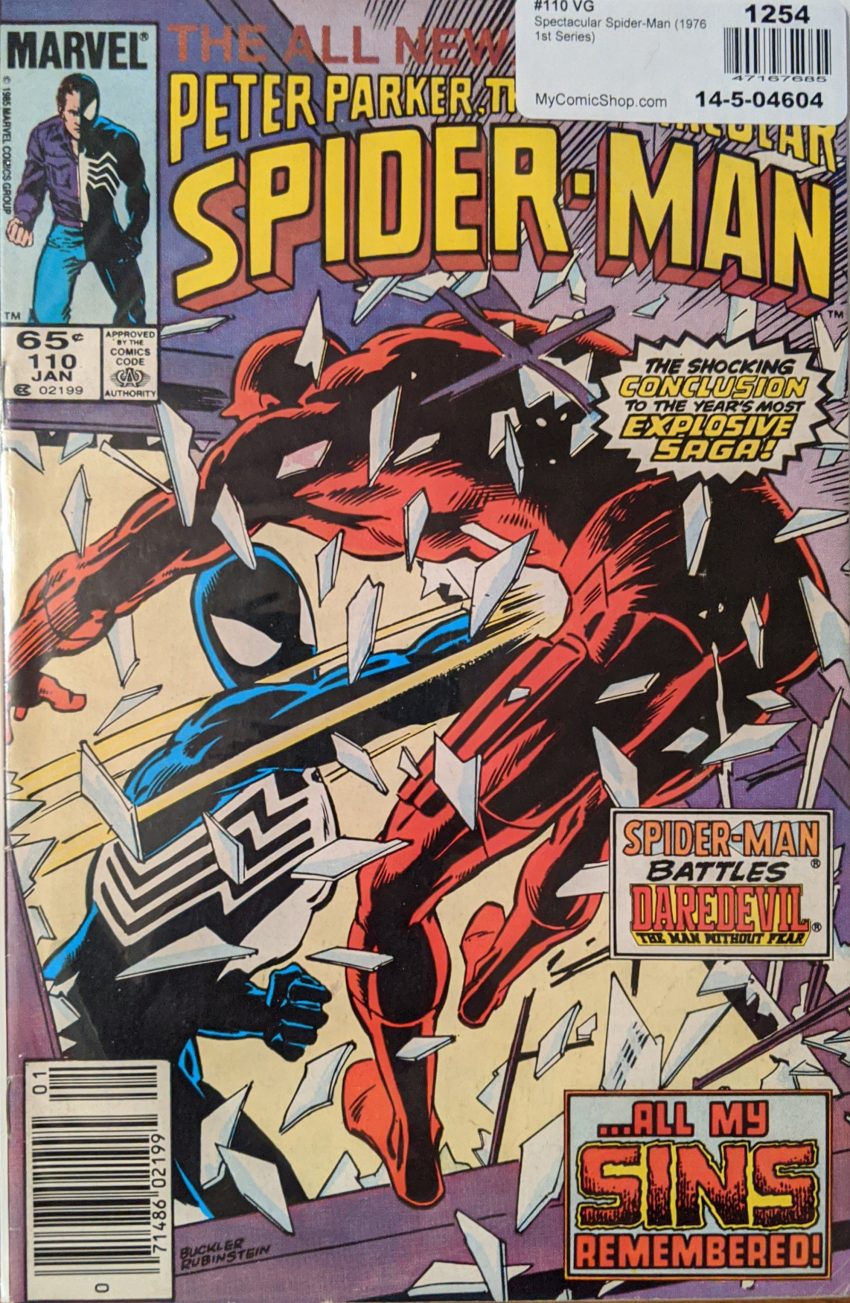 Never liked that Daredevil logo. We’ve arrived at the stunning conclusion of The Death of Jean DeWolff, a story whose title seems a little more weird the further we get from her dying on page 3 of the first issue. This one is inked by “M. Hands,” a clear sign it was running late. This issue begins as the previous 3 did, with a recap of someone’s life, but this time it’s Spider-Man recounting his early days with Betty Brant as he & Daredevil race to the Jameson residence, Spider-Man swinging so fast he quickly outruns DD.  Our hero is certain based on convincing evidence that his first love has been killed by The Sin-Eater, and he absolutely intends to return the favor. Here’s the thing about that, tho:

On the one hand, a sequence that’s been done in a million movies and books and whatnot. On the other hand, a very well done version of it. Shocked to see Betty alive, Spidey feels he’s got a second chance. He webs Sin-Eater’s gun out of his hand and breaks it in half.

Spidey’s all the way gone this time, and the villain of this 4-part story has already been subdued this early in the book! What do we do next? Well, DD finally manages to show up and restrains him, saying Carter is no longer a threat to anyone. Spider-Man isn’t convinced. DD says the only way to Carter is through him, so Spider-Man punches him right out the window. DD taunts him from the street below, and in his rage, Spider-Man falls for one of his own oldest tricks, furiously chasing down his friend instead of killing Carter. DD mostly tries to keep out of Spider-Man’s reach, hoping to keep him angry & sloppy for his own sake. Spidey starts ranting about how DD is protecting criminals. DD tells him he can’t be judge, jury & executioner.

Having DD beat Spider-Man in his own book is something, but again, they do a good job with it. We move around the city seeing other cops, regular people, crooks and so forth reacting to the revelation that Sin-Eater was a cop. We also check in with that kid who let Santa into his house, who thinks his dad is going to be so excited by the giant TV Santa is going to bring them in exchange for their now-missing previous one. We must assume that’s going somewhere. Next morning, Peter Parker arrives at The Daily Bugle just before JJJ gets back in town, fired up as usual.

Hey, is that a totally miscolored and misspelled Ann MacIntosh? Could be! I can’t guess who inked this page, but that’s about the most Ditko JJJ you could render in panel 3. Aunt May wants Peter to know Ernie Popchik was really shaken by the revelation of The Sin-Eater, and left the house with his old revolver from the war, and she’s really worried. She asks Peter to find him, and doesn’t want to let her down. But then Robbie comes out and tells him he’s taking photos for a “man on the street” reaction to the Sin-Eater story. When Pete protests that he needs to look for someone, Robbie says, “Well, now you can look for them and make money at the same time!” Much more of a Jameson move, I’d say. At any rate, soon Peter is behind Ivan Snyder from The Bugle, asking people if they can trust the police in light of the Sin-Eater incident. And it’s ‘85, so unlike it would’ve been in the 60s, the answer is a resounding “no.” We cut from the interviews to Ernie on the subway, where 3 goons attempt to rob him. They have erred.

So Carter was probably juiced up, making him a better match for Spider-Man than he might seem. Meanwhile, a mob outside begins trying to storm the precinct to get at Carter. Spider-Man is observing the whole thing, taking pictures and thinking about how Carter played him.

Big finish! More than 20 years after their first meeting, Spider-Man & Daredevil know each other’s secrets. And so this dark story ends on a weird sort of up note. I am, it is probably apparent by now, not the biggest fan of dark Spider-Man, but I’d say this one was well done. Was it worth losing the character of Jean DeWolff? Probably not, honestly. I first read this in a trade many years ago, not yet even knowing who Jean DeWolff was, and was pretty confused by how little of it had anything to do with her. I feel like if you’re going to kill off a long running character, they should at least play a part in the story of their own demise. But the story told was well done. As we’ve seen, this story not only led to a sequel by David and Sal Buscema a few years later in TAC 134–136, it also indirectly gave us the origin of Venom. Pretty big legacy there.

And that’s where we’re leaving it for now. Next post, we return to 1989, to comics I bought as they were coming out, and see what’s happening there.