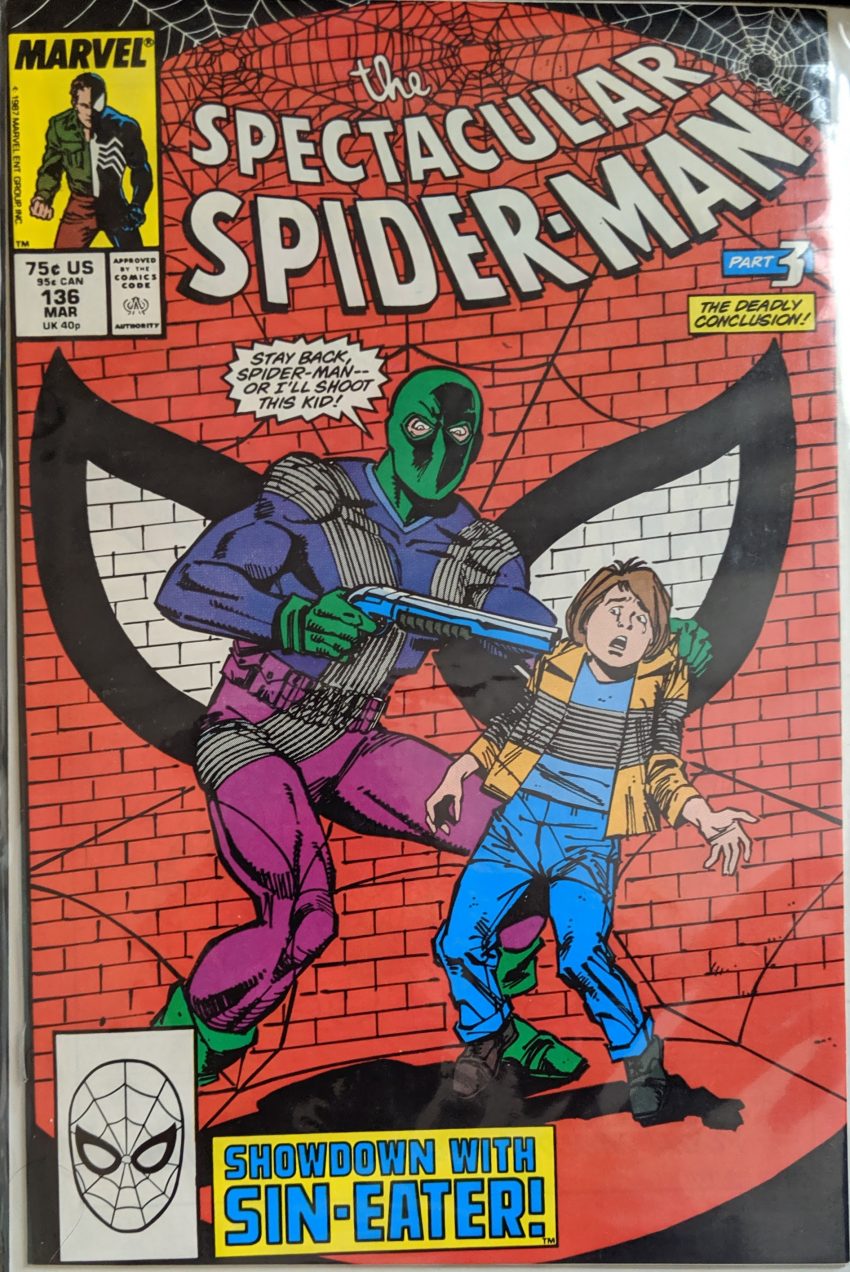 Alright, let’s do it. This cover seems like it’ll have a hard time coming to pass, but we’ll see. We open with Peter reading about his dumb move on that TV show in The Daily Bugle. Mary Jane comes home, still being way more patient than he deserves even as he acts like a jerk. She brings him a Daily Globe with all the stuff about him cut out as a joke.

(Didn’t she tell him to trust The Force last issue?) It’s a blackout. Huh, and with Electro on the loose? Imagine that. Peter somehow doesn’t even consider that as he suits up to go take pictures and help if he can. Meanwhile, Stan Carter is dictating a draft of his book by candlelight and also freaking out and seeing The Sin-Eater taunting him with his victims. He’s really going nuts.

Uh-oh. Out on the streets, there’s a lot of traffic jams due to the power outage, and a lady is going into labor as her boyfriend finds his car trapped in traffic. Spider-Man drops in and offers to carry her to the hospital. That’s nice of him, he doesn’t usually get to do stuff like that.

How many power stations has Electro attacked, blown up, or held to ransom in his career, and Spider-Man seriously has to be told about this? As he refuses to go help, Electro tells Tork he wants $10 million, or he’ll use his connection to the power grid to blow up people’s TVs in their faces and shut off emergency generators in hospitals. He’s really going for it this time. And Spider-Man?

Well, there you go. Spidey reaches the power station, and a kid very much like the one on the cover watches him swing in, the cops calling him a coward. Inside, Spidey plays the oldest trick in the book, goading Electro to prove how tough he is by fighting him hand-to-hand instead of with his powers. Electro isn’t falling for it at first, but Spidey really doubles down on the tough guy talk. Outside, the little boy sneaks away from his Mom to try to find a way inside to see the fight… and instead finds The Sin-Eater.

This isn’t looking good for Stan Carter. Electro finally wises up and goes back to zappin’, but Spider-Man maneuvers him into shooting some pipes on the roof…

Well, then. Suicide by cop. A bit of a weird story structure to this one, but pretty effective. Peter being a jerk to MJ is the only part that bugged me. I think Peter David wrapped up the story of The Sin-Eater pretty well. And, again, I promise I’ll quit talking about it, but this was a dark Spider-Man story done so much better than Kraven’s Last Hunt. It had so much more going for it, it made so much more sense. Ok, ok, I won’t bring it up again. It’s just so annoying that one of the most revered Spider-Man stories is such a complete disaster. Whatever. Come back next time for the return of another classic Spidey foe.