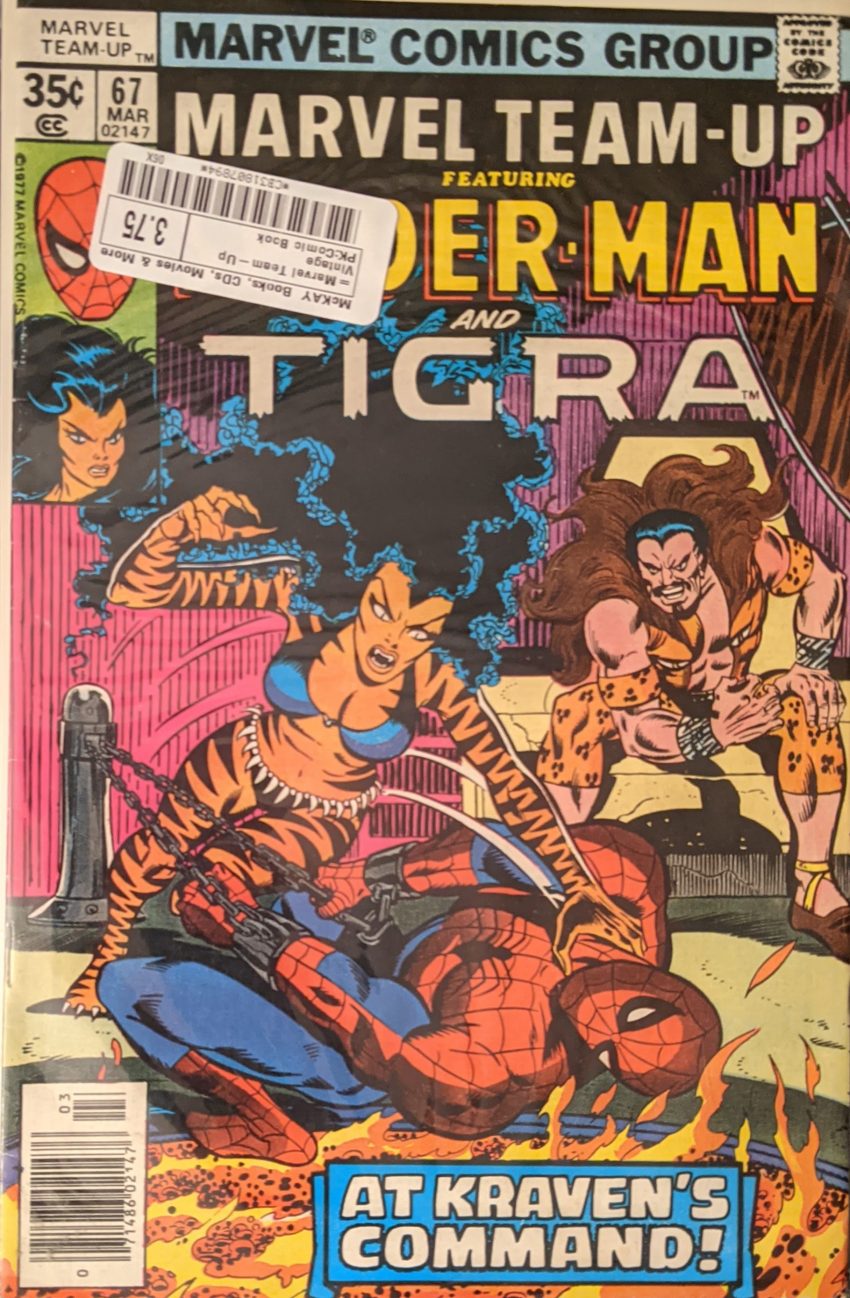 Weird application of zip-a-tone on Spidey’s head. Tigra with black hair is kind of jarring. And it’s a Kraven story, so this’ll be fun. Just kidding! This is another one I read years ago, when I was just buying old comics but hadn’t started the blog yet. And like any Kraven story, it’s terrible, so it’s not exciting to revisit, but here we are. Same team as the last few issues as Spider-Man is swinging around town to clear his head after a long night of studying when he notices a guy on a roof watching him. He swings around to sneak up on the guy, but…

Page 3 and this comic is already immensely goofy. That’s how it goes with Kraven. They do some fighting as Spider-Man thinks Kraven seems far faster & stronger since their last encounter in TAC 2.

Spider-Man dead on page 7 of some random issue of MTU. Who would’ve thought? He wakes less dead than advertised, in Kraven’s as-yet unidentified lair, and finds Tigra at Kraven’s side. Have we seen her before? Oh yeah, MTU 125. And also MTU 8, when she was The Cat, in the suit now worn by Hellcat, which isn’t confusing at all. I don’t actually know how Greer Nelson went from being The Cat to a literal catwoman, and I still haven’t looked it up. But she’s here now, and you can predict what you get from putting a superhero whose whole costume is a bikini in a comic by one of the medium’s horniest artists. She is under Kraven’s control. Spider-Man wants to know why he’s still alive and chained up here.

Famous for honorably cheating in every fight they’ve ever had, Kraven is. How is trying to make Spider-Man kill an innocent woman and/or be killed by her his “honorable vengeance?” Kraven sucks so bad. Spidey manages to snap one of his chains, and wraps the other around Tigra’s collar, whipping her across the room and somehow not, you know, breaking her neck. That doesn’t even slow her down, tho, and as Spider-Man’s 2nd chain snaps, she tackles him right into the kind of hard to understand rectangle of fire on the ground. He rolls them out of it, but he’s starting to worry he’ll have a hard time ending this without hurting her.

That was easy. You’d think he woulda used the goofy mind control he used to control The Gibbon back in ASM 112. Tigra wants to kill him, pretty justifiably, but he gases her and scampers off, leaving her to cough a little and then tell Spider-Man how she got into this mess. Tigra was the last hero to fight him, in her brief starring run in a book called Marvel Chillers, but when he broke out of jail, she was working with the FF. She eventually tracked him down, but he got the drop on her and put the collar on her, saying she would be his “willing slave,” which is plenty creepy.

Super honorable! As Spidey and Tigra dodge and jump their way through a JUNGLE STAMPEDE IN NEW JERSEY, Kraven is stunned by how resilient they are. Kraven turns tail a 2nd time in one issue, but Tigra tackles him to the ground. Unfortunately for her, he’s got still more gimmicks crafted with her in mind, and some kind of sonic weapon that overwhelms her. Lucky for Tigra…

WHOU-U-UFF, everybody! Another dumb Kraven adventure comes to a deservedly anticlamactic end. Kraven said something about “Tigra and her Cat People” that finally made me look her up. Turns out the lady who gave her the powers of The Cat was also a member of a secret race of Cat People, and they eventually turned her into one of them. Ooooooohkaaaaaaay. Her appearance in MTU 8 was only The Cat’s 4th appearance anywhere. The next issue of her solo title was its last, and her next comic was when she became Tigra. Well, now I know. Next time: Swamp stuff.