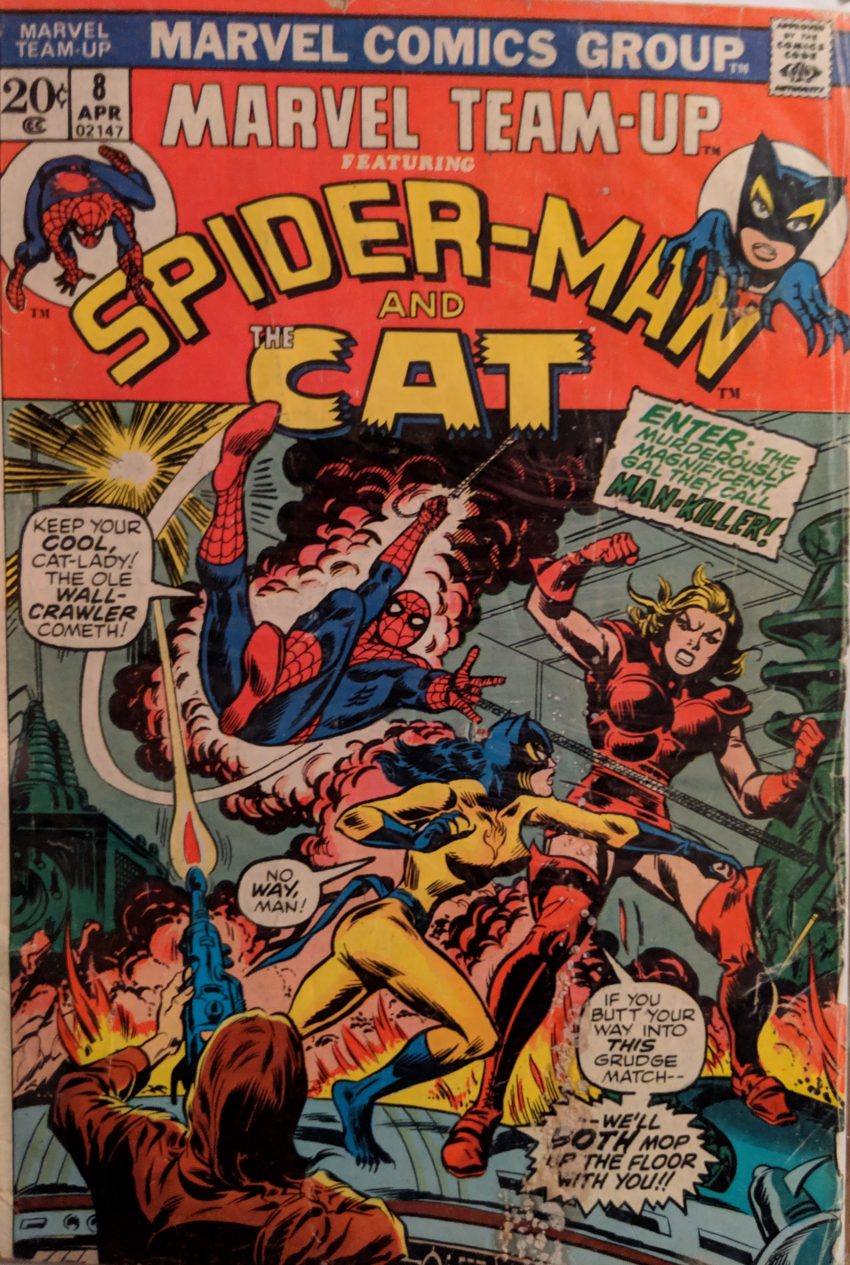 Oh boy. As it happens, I have already read a sequel to this issue published several years later, but even if I hadn’t, you can tell this one’s gonna be rough. “Man-Killer.” This is going to be classy. This one’s by Gerry Conway and artist Jim Mooney, who’s inked some of the books we’ve seen so far, but I believe this is his first time as penciler/inker. Mooney has a long career in comics, and we’ll be seeing a whole lot of him on this blog. I first encountered him drawing Teenage Mutant Ninja Turtles stuff in the late 80s. I didn’t find out he had a history with Marvel for decades.

Anyway, it’s action from page one as Spider-Man is out and about when his Spider Sense alerts him that something is wrong in time for him to avoid an attack by The Cat. Not getting a good look at his attacker, he manages to escape, sneak around, and turn the tables…

Spidey manages to survive his fall, naturally, and then The Cat asks if that’s enough, or if she still needs to prove herself.

Cat tells Spidey she’s been on the trail of The Man-Killer, a giant tank of a woman who killed Mayor Samuels because he was “anti-women’s lib.” The Cat happened to be on the scene, and leapt into action.

Cat was no match for… sigh… Man-Killer… and was knocked out. When she came to, she tried to pick up her trail again, and the chase has led her to New York. The Cat says if she isn’t stopped, Man-Killer will destroy everything women have fought for. That seems… highly unlikely. Spidey wants to know why she came to him for help.

Alright, then. Meanwhile, M-K smashes her way into an unidentified location full of women in militaristic outfits who seem to know who she is.

From M-K knocking that guy out, we switch abruptly to her origin. She was an Olympic skier who bet a male skier who said women could never compete with men that he was wrong. But when they had a contest, the guy cut her off, causing them to crash into each other and fall off a mountain. He died, she got wounded and scarred up. She was rehabilitated/recruited by this militant group, which gave her power suit, so now she’s The Man-Killer. I mean… ok. That guy literally died for his hubris, I dunno if this incident is worth declaring war on all men, but we all have to make our own decisions. Back in the present, she declares that “the center of male power” is in the Harlem power plant (Uh…wut?), so they must attack it. At that moment, Spidey is asking The Cat what her whole deal is. Instead of another flashback, we just get this:

That is one silly looking evil vehicle. M-K and Co. ram through the fences and walls of the power plant as Spidey & The Cat rush to the scene. Some security guards run in, but M-K says no one can ambush The Man-Killer.

As The Cat gets into it with M-K, Spidey fights her truck full of goons. Neither seems to have too much trouble with their opponents, actually, it’s over pretty quickly. But while the heroes mop up the goons, M-K escapes… with a hastily described prototype radioactive generator, uh, thing, according to the guy who runs the power plant. Spidey takes off by himself, saying The Cat needs to take care of the goons (Not very equitable!) and eventually tracks down M-K like a real pro…

…by getting sucker punched in an alley. They trade some increasingly heavy blows until The Cat shows up.

Do what now? She got so mad that dudes built her suit that she… went into a coma or something? She looks like a robot that’s been turned off. That’s crazy. She got so shocked her hair deflated! Is this the first stinker to hit this blog? I guess it is. I lose track because I haven’t read this stuff in the order you’re seeing it. Sadly, it is far from the last bad comic we got in front of us. And like I said, one day, we’ll actually see the Man-Killer again, like that was an idea anyone should have had. And we’ll see Greer Nelson again too, but by then, she will no longer be The Cat, having been transformed into a weretiger called Tigra. What? Totally normal. Happens to the best of us.