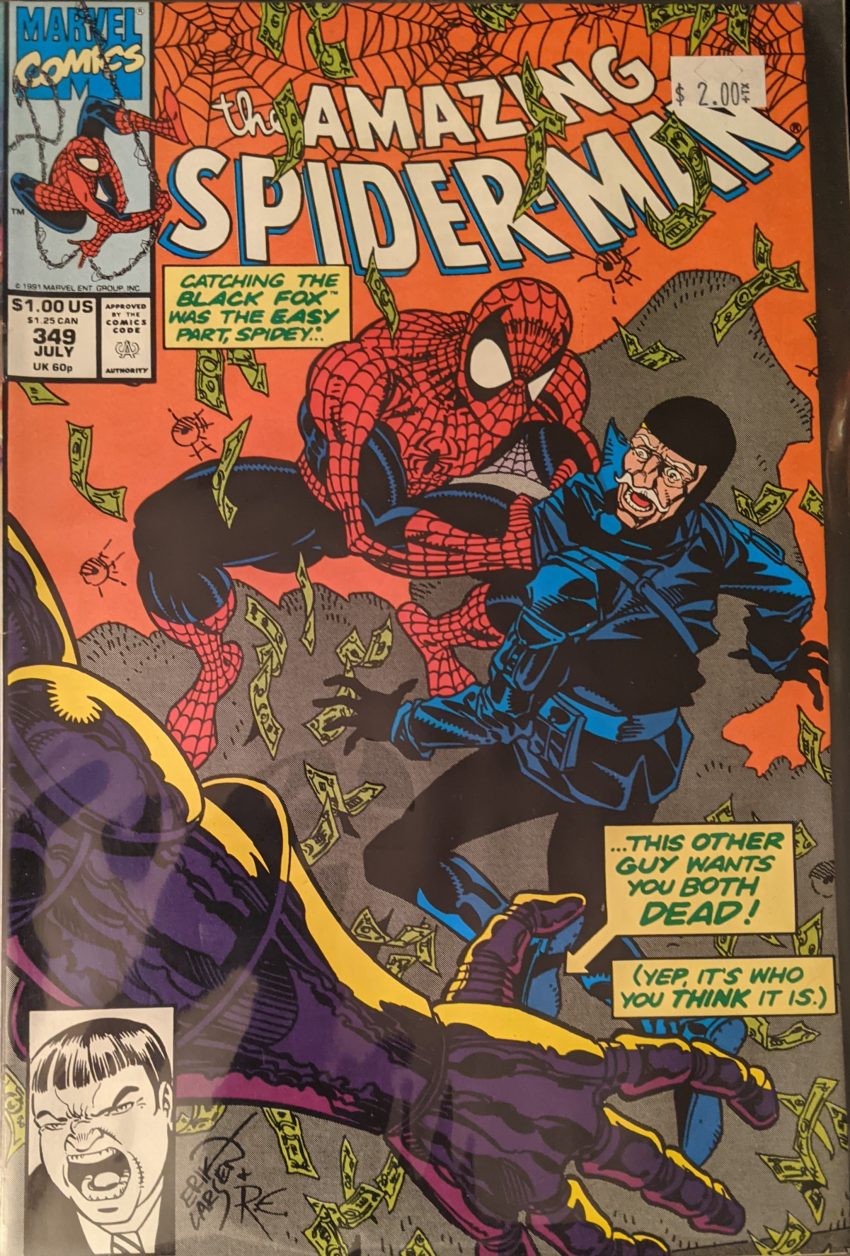 $2. Another of the rare ASMs I skipped once I was buying comics. But I was 12, I didn’t exactly have disposable income, and my lord & savior Todd McFarlane was making another Spider-Man comic which I didn’t even like but had to buy, I didn’t always have $2. It’s funny how I can distinctly remember buying some comics, but not most of them. When did I get this? Where? No idea. I distinctly recall buying ASM #320 at a Walgreens. I know I bought Marvel Tales #214 (Reprinting ASM #161) at this pharmacy near my parents’ house that is now a nail salon. I know I got The Saga of the Alien Costume trade paperback at this bookstore next to an ice cream shop painted in cow print on the outside. I can recall buying Spawn #2 from this gas station in a neighboring town that I never went in before or since. I know roughly when I made my first pull list a comic shop (A few years from this issue), and from then I at least know where they came from, if not recall the specifics. Most of them, tho, lost to time. Anyway, The Black Fox is back, unfortunately. But look who he’s stupidly garnered this time! David Michelinie, Erik Larsen, Randy Emberlin, Bob Sharen. Ol’ Foxy is already about to make a move on page one, as Michelinie rolls out one of his beloved pun titles, “Man of Steal.”

Foxy has just planted some things so he can come back tomorrow and claim to be the brother of the rich and now recently deceased tenant of this lavish apartment. He convinces the landlord this Robert Chalmers died suddenly and, as his brother, he’s now the executor of the estate. They head up to the apartment, find a will and that picture of Black Fox as the brother in his desk, and leave him to his new apartment. The real Chalmers is apparently “on a safari,” so Fox is borrowing his home for a new heist. Meanwhile, Spider-Man stops your garden variety purse snatching and then swings home, thinking he’s got a gig today to photograph “the unveiling of The Trask Diamond.” On a quick stop home, he’s surprised to find MJ there.

Some of the art from the facing page has wound up on this one. Newsprint wasn’t the best delivery option. Meanwhile, after we see a certain green jet that’s supposed to be carrying royalty land, we cut to Fox-as-Chalmers off to his next stop, selling some jewels he recently stole.

Black Fox returning for one last job every couple years is so boring to me. “One last gig and I can retire to–” “Yeah, yeah, yeah, The French Riviera, we know! But you won’t! We know!” I mean, I know aspects of superhero comics are repetitive, but it doesn’t have to be that bad. Anyway, Peter’s off to his gig, with a heretofore unseen Daily Bugle reporter just called “Kim.” They tell each other the exposition that Raymond Trask (Random rich guy previously seen in ASM 336 and 325) bought a famous diamond and renamed it after himself, and is about to put it on display. Not sure if ol’ Ray is any relation to Bolivar Trask, creator of the mutant hunting Sentinels. This is his last appearance, so I guess no one cared to find out. Black Fox is also on the scene, gassing the guards carrying the diamond and taking off with it, so that when its ridiculous case is lowered out of the ceiling in front of the assembled reporters for publicity, it’s empty. Chaos erupts, thought it doesn’t seem like it should. Shock and confusion, sure, but not, like, people running all over.

Same story, different issue number. A goon reports to the still unseen royal person that his target was spotted, but escaped, and is told he better make good, then we cut ot Peter staring pensively out his window late at night so Erik Larsen can do ridiculous girlie shots of MJ as she asks him what’s wrong. Black Fox, of course, and he promptly decides to go out looking for the old man. And he eventually spots Black Fox driving a fancy convertible. He follows him to “a deserted, bankrupt resort on Long Island,” where he begins the exchange of The Trask Diamond for his retirement fund.

Spidey busts up some goons and webs open this Hiroto guy’s briefcase, his money getting sucked up into helicopter blades as he flees one way and Fox the other. Spidey doesn’t have time to chase both, and Black Fox is the one giving him fits today and also already has a tracer on him, so he makes his choice.

Always in for a good time when Doom shows up. In the letters, a female fan takes Erik Larsen to task for making all his female characters “dress like bimbos.” She’s not wrong! But she won’t have to worry about that much longer, as it is revealed below her letter that next issue is Erik’s last. They say his next gig is a secret. I’m not sure why. Maybe he hadn’t picked one out yet. They also reveal Mark Bagley will be taking his place. So come back next time for Erik Larsen’s last ASM (Until like 9 years later).