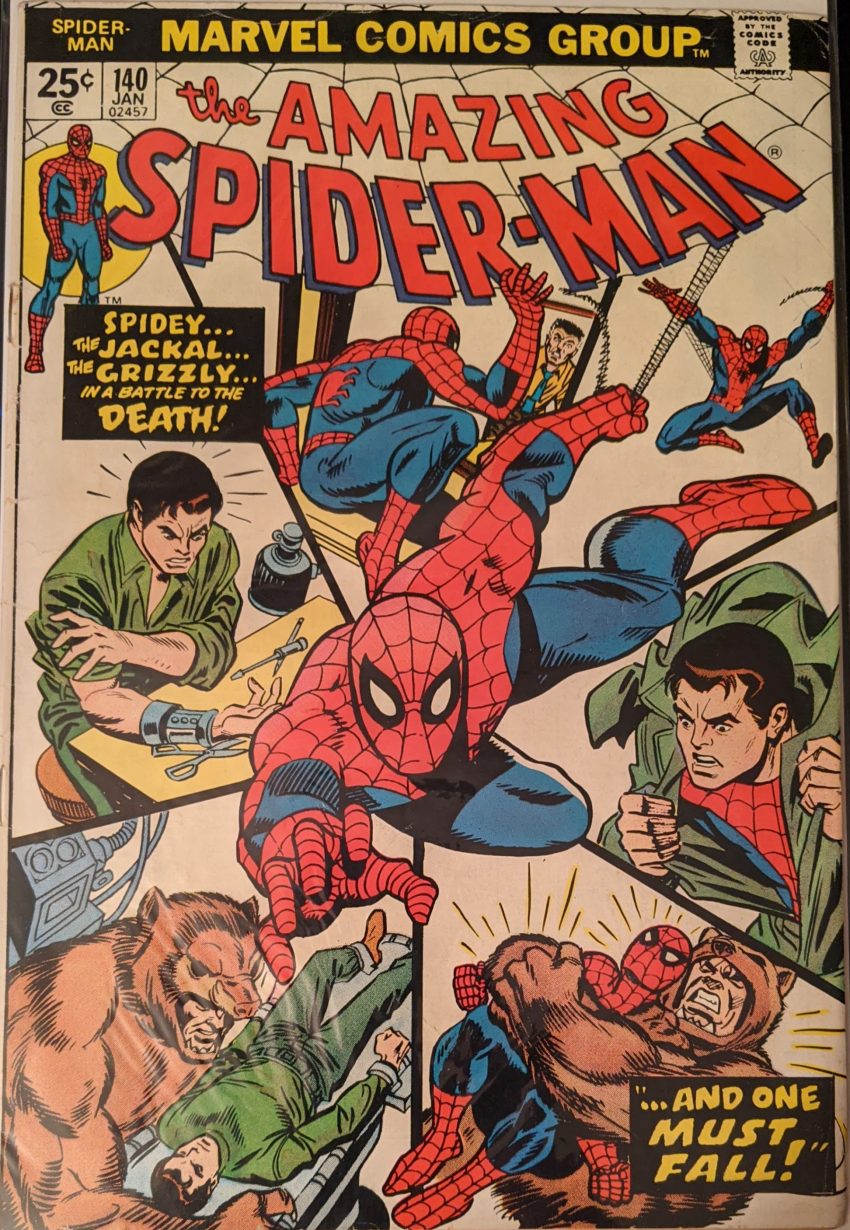 Which one will fall? I mean, we can assume it’s The Grizzly, but let’s find out. We pick up where we left off, as The Grizzly carries Peter Parker (in a bear hug. No, really) down a hall behind the bounding Jackal…

Peter unconsciously remembers the events of last issue in case you missed it, and then wakes up with Betty Brant & Ned Leeds looking over him in the lobby of The Daily Bugle building. He claims he doesn’t remember how he got there as they take him to the coffee shop across the street, and Betty says they were afraid he’d been hurt. Peter begins to remember what happened to him, and rushes to the bathroom to see what’s up with the weird feeling on his arm. It’s not good!

That’s a lot of hardware for a tracking device, 1974 or not. Peter somehow holds miles of web in smaller gadgets. Why is this happening? We know, due to the out-of-order nature of this blog, The Jackal knows full well who Spider-Man is. What is this meant to accomplish? Anyway…

Well, hey, it’s Glory Grant! I didn’t know she started out as Peter’s neighbor. In the oft-referenced Comic Creators on Spider-Man, Gerry Conway says a lot of the time he was just throwing stuff at a wall, and sometimes it didn’t go anywhere. Glory was a potential new love interest, but it never went that far. Anyway, Flash offers to give Pete a lift to ESU, but Peter says he has some “heavy thinking” to do. At midnight, we find our hero in the lab at ESU, working on getting this dumb thing off his arm. He hits it with a blowtorch to short it out, hoping the Jackal was buffing, and is able to get it off without exploding. That’s lucky. Soon enough, Spider-Man is back in the air. He heads right to The Bugle, hoping to get some info about The Grizzly in spite of it being super late.

Gerry Conway’s Spidey is too mean to JJJ. It’s supposed to be more of a playful rivalry, especially since one of them can pop the other’s head off. Feels like he’s being a jerk. Anyway, JJJ offers that, eleven years ago, he saw one Maxwell Markham, who wrestled as The Grizzly (No wacky bear suit), and was appalled by “his violence.” JJJ must not see much wrestling. He ran a bunch of “The Grizzly: Menace or Threat?” editorials demanding an investigation (The man has one interest!), and that time, it actually worked. “The Wrestling Commission” “revoked his license” (Is that a thing???), and then JJJ literally blew smoke in his face on his way out of “the hearing” (There’s no way this is a thing).

“Why did I throw my shoe?” has just become one of my favorite JJJ moments of all time. Spidey breaks into The Jackal’s former hideout, but he’s all moved out. So, using his ace detective skills, Spidey goes to literally the first gym he finds with a light on inside, and somehow, this pays off. A guy inside remembers Max, and says he used to work out at Halberstam’s Gym. He then says he thought Spider-Man was “The Masked Marvel.” Here’s the thing about that, from Amazing Fantasy 15:

Nicely done, Mr. Conway. Meanwhile, at the gym that guy mentioned, The Grizzly has just busted in to start slapping people around, calling people creeps and punks as often as possible, as is his way. He wants to beat up some dudes who didn’t lie to help him 11 years ago (And they’re still in this gym??), but Spidey’s here to help. By webbing off all Grizzly’s clothes?

Spidey gets the bear suit ripped up, revealing Max Markham has actually let himself go over the years, and stripped of his power suit, he’s not much in the way of a fighter anymore, so Spidey’s able to wrap things up pretty quickly. Literally.

Spider-Man is so mean! That’s it for the first outing of The Grizzly. You’d think that would be the last, too, but even a character this goofy can come back. Next issue, things should start to get weird, but we got another Giant-Size to check out first.

This issue includes letters responding to the editors asking whether or not Peter should keep aging in real time or if they should slow down. The first steps toward Marvel’s sliding time rule, I guess. This letter in particular caught my eye: