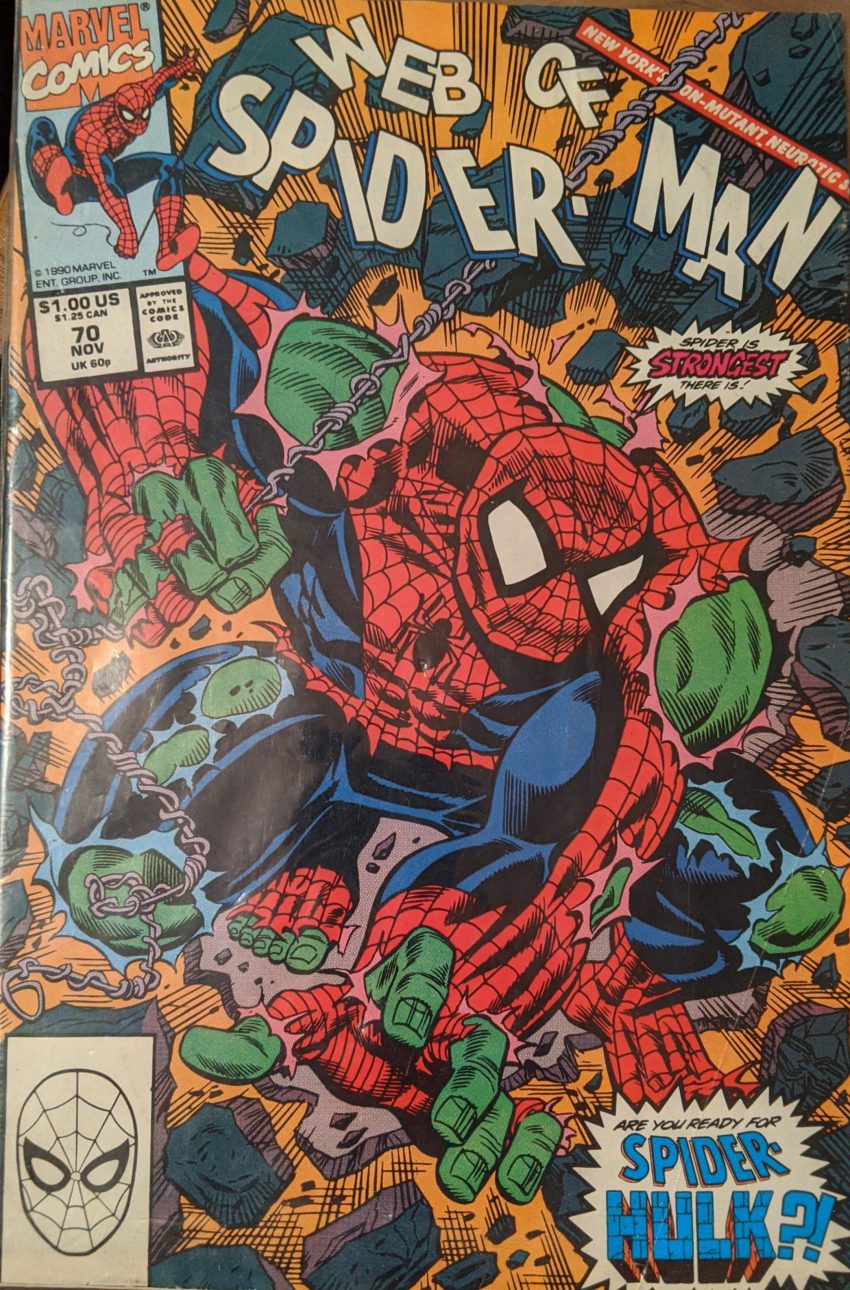 Could anyone truly be ready for Spider-Hulk? While I didn’t buy the previous issue as a kid, who could pass by this totally bonkers cover without picking it up? Not me. Our guy is riding a train home, pretty out of it, almost falling asleep and falling off said train, as he recaps last issue for us and lets us know that he just scooped up that guy’s machine and left, leaving the authorities to figure out what happened back there, and ditching Betty, too. He plans to go uses his science skills to figure out what the thingie is and what it did to him.

Not just some guy, Pete-O, that appears to be the one surviving Lobo Brother! Conway’s Peter will brush off his Spider Sense for almost anything. “Spider Sense going crazy! I never shoulda eaten that Big Mac!” Also, why does our man have 5 o’clock shadow now? It hasn’t been all that long. Before going to sort out his deal, tho, he first catches a cab to The Bugle. In the process, he sees some kids harassing a guy on the street, and avoiding the cops, but he’s too messed up to do anything.

Betty and JJJ take turns being way more angry about this than they should until Peter shouts “Leave me alone!” and runs out of there. JJJ says he was looking green around the gills, so you know what that means…

His outfit handles this change a lot better than normal clothes! Thank goodness for spandex, I guess. Spider-Hulk rips up the roof and sends the guards sprawling before leaping away. He lands in an alley and passes out, changing back as he does. When he wakes up, he’s surrounded by some very nice homeless people, who offer him some soup. But when he sees his torn costume and realizes that wasn’t a dream, he decides to get out of there before he hurts anyone. Instead, he goes to Betty’s apartment to try to get more info about the scientist she mentioned while berating him. I mean… going into a cramped NYC apartment building seems like a bad idea if you’re afraid you’ll Hulk out, but what do I know?

“Hey, Betty, can I go investigate your story?” “Oh, sure, since you look so bad.” I mean… what? Well, Spider-Man breaks into the guy’s lab and finds some notes, but when alarms start going off, he almost loses it. He mayonnaise to escape without Hulking out, but just barely. He reads some notes and decides the machine can turn him back, so he heads to the locker he stashed it in at Grand Central Station, but… well…

Same kids, of course. They’re like a new twist on Spidey not stopping the burglar, sort of. When he finds the thing missing, he gets mad and Hulks out, but then the homeless guy tells him those kids took it. He says “Spider thank!” as he leaves, which is pretty funny. Spider-Hulk catches up with the kids, but some cops see him bearing down on them and start shooting. He smashes the ground, and they get away in the confusion.

Well. Wrapped that one up pretty quick. And with dude dead and the machine destroyed, there won’t be any more power switcheroos. But… The thing zapped Hulk, and then zapped Spider-Man, giving him Hulk’s powers. Did it do anything to Hulk? Did he get Spider Powers? Was Bruce Banner unable to turn into The Hulk while Peter had it? I have questions.