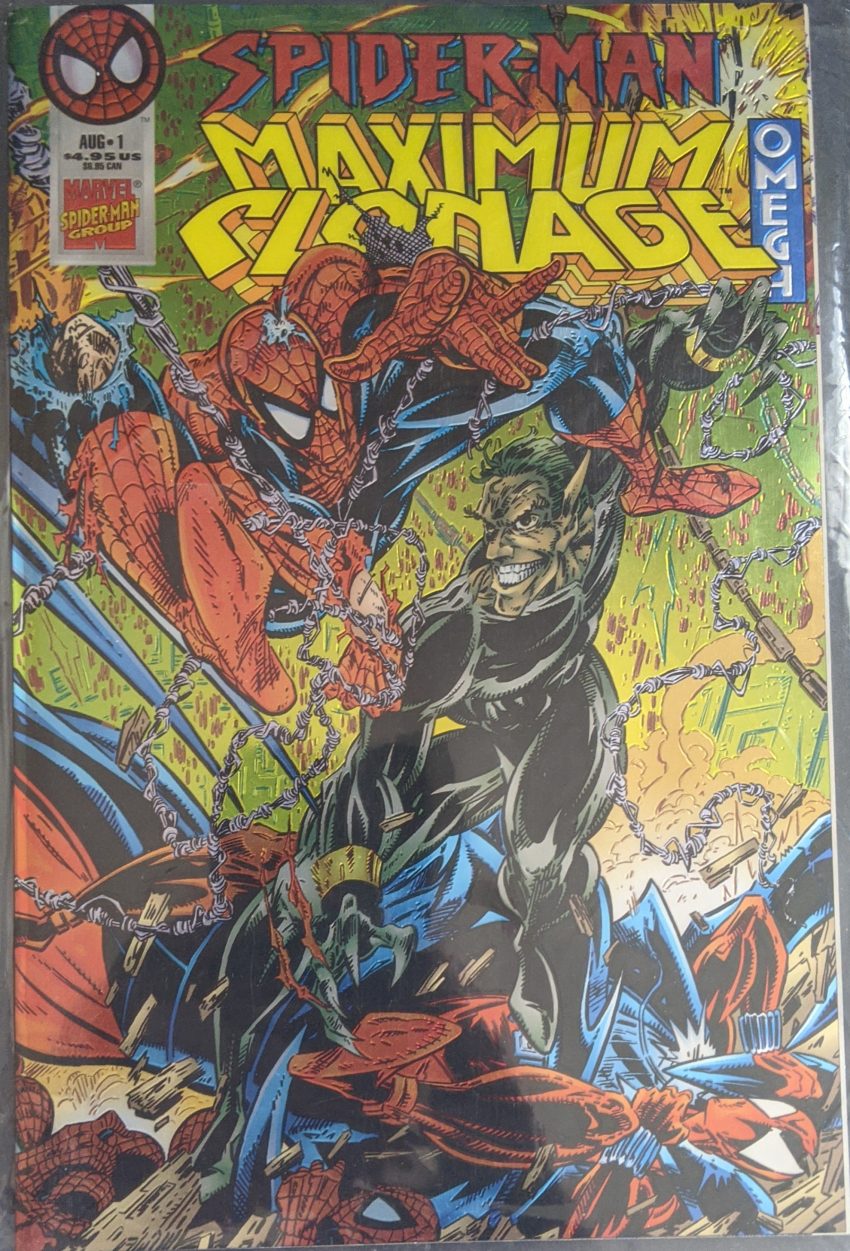 I can do this, I can do this. Can I do this? I don’t actually know. The Alpha & Omega issues cost $4.95. FIVE DOLLARS! In a time when comics cost $1.50, these utter pieces of shit cost $5. They should quite literally be ashamed of themselves. But, then, I bought them, so there’s plenty of shame for me, too. Having made it through 5 issues of utter trash by seasoned pros, it’s time to let some rank amateurs wrap the whole thing up. It has already been made clear that Tom Lyle is not ready for primetime as a writer, but they let him close this out, anyway. He was apparently heavily rewritten by several people in an attempt to make something salvageable out of this debacle. And he was writing for 4 pencilers, and 2 of them are guys who can barely draw and only got hired because they can ape McFarlane’s Spider-Man. We already saw Roy Burdine, but now we get to see Robert Brown, who has a perhaps more convincing McFarlane impression and an even worse literally everything else. They’re joined by Mark Bagley & Tom Lyle on pencils. Sam De La Rosa, Randy Emberlin, Roy Burdine, Al Milgrom & Scott Hanna all pitch in on inks. John Kalisz inks. Things are looking pretty stupid.

Ah, this one’s chromium cover is going to make it impossible to photograph, too, excellent.

Sigh. What an idiotic storyline. The Jackal was just an elderly college professor who was driven insane when a student he had a very inappropriate crush on died, and that somehow let him caper around in tights trying to punish Spider-Man for her death. That didn’t make sense, either, but it was small potatoes. A revenge story. Now it’s world domination. Why? What’s his deal? We never know. No one cares enough to describe it. And Ben. Ben is like “I can’t kill this mindless, headless, writhing mass of body parts, this unholy abomination has rights!” This is so, so utterly terrible. Ben pulls himself out of the crap, webs up his ankle for support, and sets out to save the day. Want to see this Robert Brown guy try to draw regular people? Probably not, but…

Oh, so we’re having Gwen be a totally different person from last issue, sure thing, no problem. So, yeah, Marvel really would hire these guys because they could sort of copy McFarlane’s Spider-Man even though they couldn’t draw a human face. Just desperately grasping at straws as their industry goes into a tailspin of its own making and all their star talent left the company. Anyway, The Jackal now has an army of little “Jacks,” like in ASM 399, and he’s at The Daily Bugle as the first stop in a plan to replace everyone in the media with clones so they won’t tell the public the virus has been killing everyone. I’m not even going to both talking about how stupid this is.

Ugh. Terrible. And, again, he already knew Spidercide was betraying him, but this comic seems to have been scripted in a vacuum.  At the lab, Spider-Man & not-Gwen find no one home, and then an automated security system attacks, but Spidey handles it. Ten they find The Jackal’s computer, and a shocking revelation, which I guess is just The Jackal’s plan, which we’ve known the whole issue, but which is left as a cliffhanger as we switch scenes.

How do you study McFarlane so intently that you can do a pretty passable approximation of his weird texture style and stuff and still not pick up any pointers on drawing human beings? The bad guy fight explodes into the newsroom, so JJJ goes to help people evacuate while Ben joins the scrum. Meanwhile, plainly exposing the stupidity of Jackal’s plan, MJ sees a TV news report about the fight at The Bugle. The newscaster even helpfully says “it looks like Scarlet is almost out of webbing,” which is a mindbogglingly lazy way to have MJ grab some web cartridges and go down there. Regular people have no idea what’s up with how the web works. Come on, guys. Back at The Bugle it’s fight fight fight, terrible dialogue, revelation that Scrier turned Spidercide on behalf of Judas Traveller, etc. Honestly, who cares? Eventually the 2 bad guys go out a window and Ben, who “looked like he was running out of webbing,” saves them with his webs. But Spidercide cuts the web, falling to what should certainly be his death if there’s any mercy in the universe, but I honestly don’t recall.

What an incredibly weak and halfhearted explanation!

This is so stupid it’s almost physically painful. Roy Burdine jumps in for the next bit of this seemingly endless issue as Spidey starts fighting Jackal, leaving ben to go to the roof to try to disarm the bomb. But then the fight instantly comes to the roof, somehow, so that’s not gonna work, and then Jackal is about to drop Spidey to his death (Goodness, what would he do?), so Ben tackles him.

“Don’t you want to hear our retcon of the retcon?” “Nope!” “Oh, cool, thank you!” This is the laziest thing I’ve ever seen. The spiders get to work disarming the bomb, the little Jacks show up, Ben takes care of them, whatever. No one working on this comic cared, why should I?

They try to talk her out of it. MJ comes running in somehow. Gwen gets knocked off the roof and is hanging by a powerline, ‘cuz falling off stuff is what Gwen Stacys do.

The Jackal hits the pavement, and really dies. He never came back, to my utter shock and amazement. This stupid mistake has not yet been made again.  Gwen says she realized she couldn’t actually kill him, who cares, then the Spiders’ danger senses go off. And the grown ups take over the art.

Bagley handles Ben heading to the river and swinging the canister in a big circle to chuck it out to explode harmlessly over the water, and then Tom Lyle starts drawing from his own terrible story for the finale.

Immediately after saying he should give the virus to someone he trusts, Spidey hands it to the first EMT on the scene and says “handle it carefully and dispose of it properly.” Sigh. Then Gwen escapes into the crowd. Sigh. Then the Parkers go home.

I’m not even gonna say anything. Peter suddenly decides he has to settle things with Ben right now before he can relax.

Seems like this would be where Ben takes over as Spider-Man. And yet, due to the way the marketing department wanted the clone saga to go on as long as possible, it’s not. There’s an improbable 4 more months between this issue and his first as Spider-Man. Just wringing every penny they can out of this terrible premise.

In the biz, they say every comic is somebody’s first, so every comic should be great. Clearly, this storyline is the biggest failure to achieve that ever posted to this blog, and I believe it will remain so. But, there’s some truth to the saying. And due to the fact that every comic is somebody’s first, there is a small but loyal bunch of delusional psychopaths for whom Ben is “their” Spider-Man. I sat through this stuff in utter disgust, wishing I had the old Spider-Man back, but these people think this is the real stuff. These people inspired Marvel to publish giant, expensive collections of this terrible shit, and people bought them. There is truly no accounting for taste. Anyway. Next post, we take a pretty big detour.