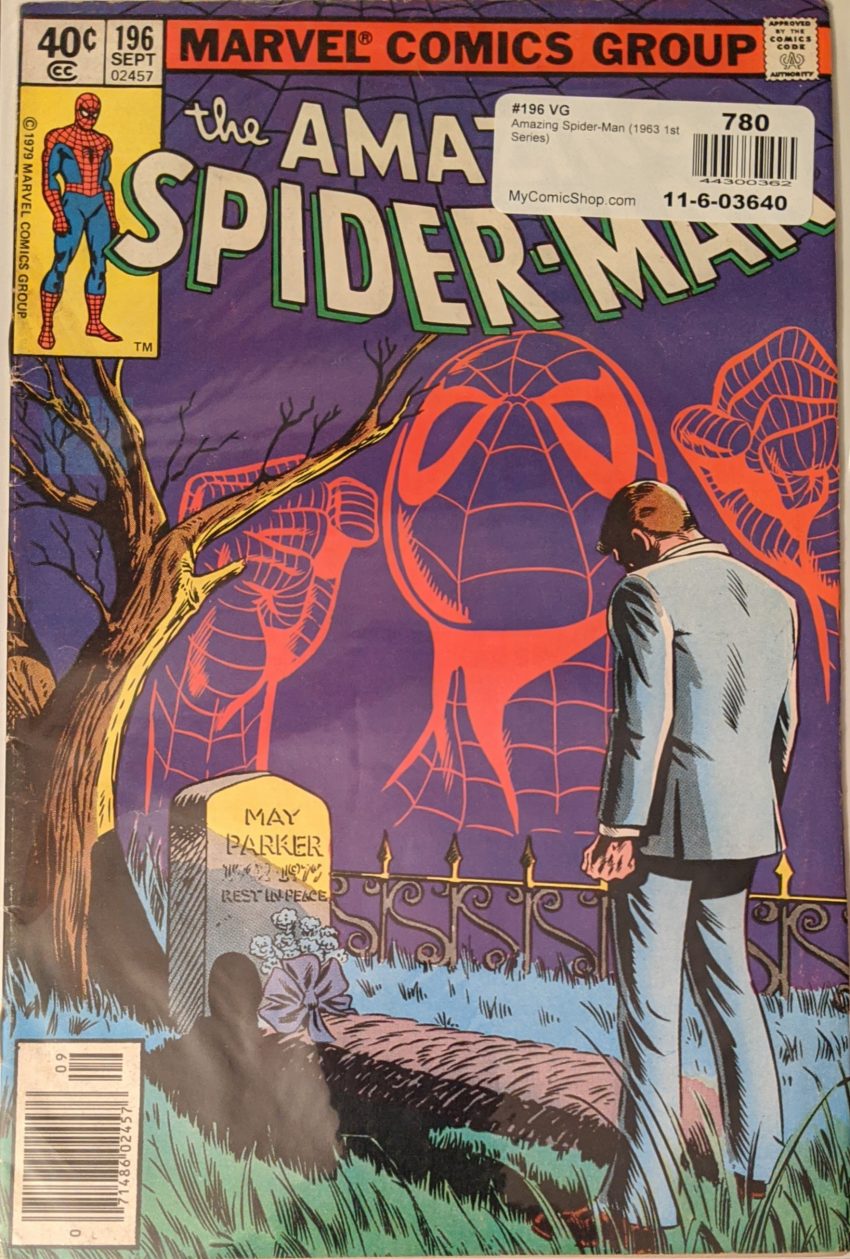 Al Milgrom & Jim Mooney tag in for art on this one, many years before their extended team-up on Spectacular. Grim stuff on that cover, and it’s just as grim inside as Peter rushes to the nursing home as fast as he’s able with a broken arm. In the process, he sees a mugging, and while he doesn’t want to stop, he’s Spider-Man and all. But he sees some cops running to the scene and figures he’s ok to leave. They see him leaving, though, and say he’s just as bad as JJJ says for not helping. Can’t win!

She’s really dead! Right? Looks like it. Peter loses it, as you’d expect, and storms out into the night in shock.

Poor guy. He goes on to imagine all the other people who’ve died in his life, including Black Cat. I mean, sure, but compared to Uncle Ben and Gwen Stacy, this villain you kinda had a thing for last night isn’t quite the same thing. Meanwhile, at The Daily Bugle, a momentous event is about to occur.

Oh, how I wish a newspaper couldn’t afford to be biased, Robbie. So, now JJJ has chased off both Peter and Joe Robertson. How can he run The Bugle without Robbie? I guess we’ll see. Unless we don’t, since Peter has no reason to go there anymore. Wolfman said he wanted to shake things up! Further meanwhile, the two goons who were lured away from Black Cat’s service by a mysterious figure who’s obviously The Kinpgin are being told by the mysterious figure who’s obviously The Kingpin to go find Spider-Man and bring him back alive. Then we cut to the campus of ESU, where Peter’s reverie takes him walking by Flash and Harry, now with Flash’s girlfriend, Sha-Shan. Seems like this is the only use Wolfman has for these characters, just having Peter have a brief chat with them as he walks by. They give him trouble for ditching them lately and then he says Aunt May died and they feel bad. Like they should, these guys have been nothing but jerks lately.

That’s not a very auspicious debut for Deb Whitman, but there it is. You have to wonder why he didn’t do that any of the other times Peter’s been here since he’s been plotting against Aunt May pretty much the whole time, but what ya gonna do? Peter offers to take Anna home, then wanders down to the wharf to be sad some more. Like when Johnny Storm was wandering around the wharf feeling bad for himself way back in MTU 2, it’s superhero tradition! He hallucinates Aunt May telling him he has to go on and keep helping people, and then… Joe Robertson walks up? Busy time out here at the wharf.

Joe has always been a father figure for Peter, so while it’s a bit odd that he happens to go to the wharf to think, it’s nice to have him comfort our hero. And we even learned brand-new backstory for Robbie. From there, Pete wanders off to Aunt May’s house, and finally…

“Oh, hey, that guy I’ve talked to several times in the last week, I totally know him. I just forgot!” Oooooohkaaaaay. Reinhart has been very much drawn like a generic “bad guy” since he first showed up, but I confess, I don’t know which supervillain he is. I guess we’ll find out together, as Peter rips his outer clothes off and swings away as Spider-Man, finally realizing something is up. But unfortunately for him, that’s when the two goons catch him with a gas bomb and a super strong net and drag him to the feet of their “mysterious” employer…

Honestly, a huge wide dude like him can’t be a mysterious figure in the shadows. Even just showing his giant hands is enough of a tip off. Anyway, looks like Spidey’s not going to be able to investigate Reinhart just yet. We’ll see how this goes next time.