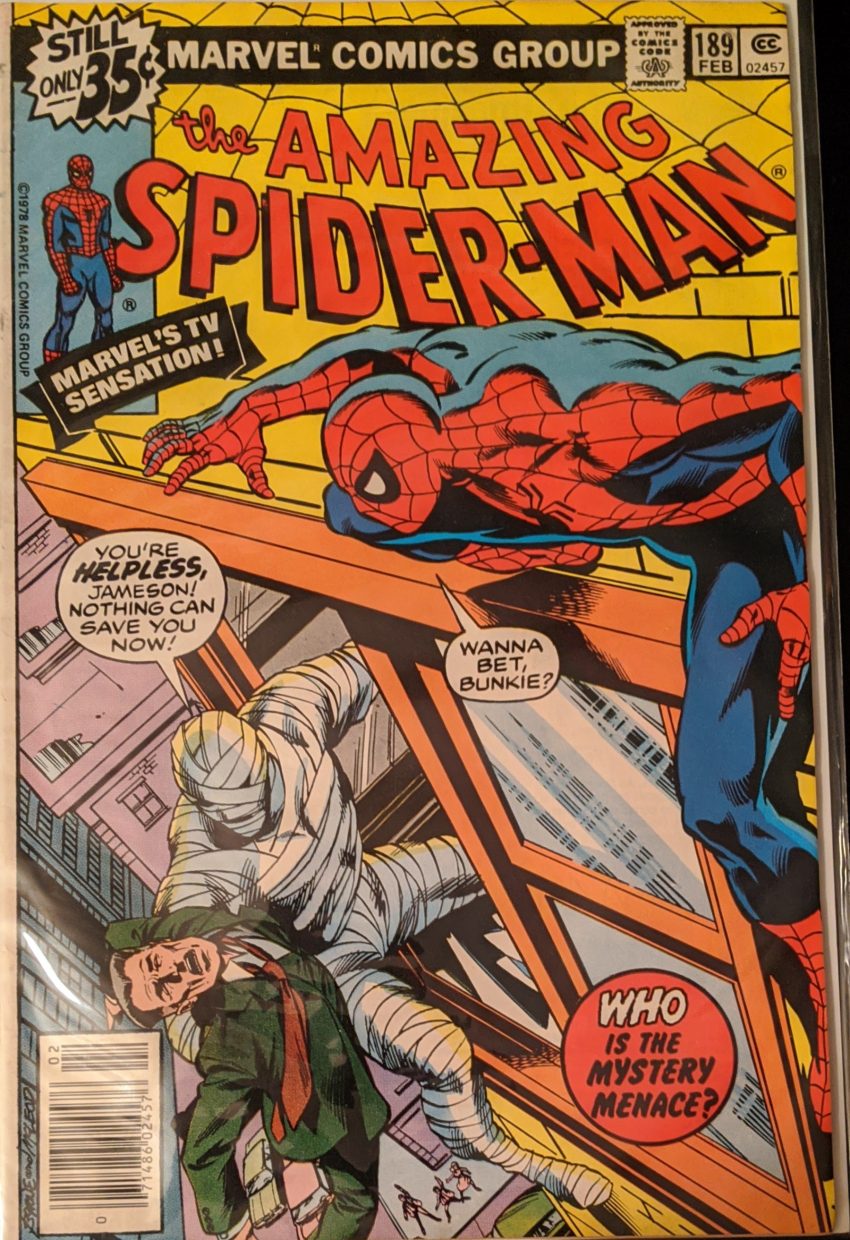 John Byrne and Jim Mooney swing by to illustrate this issue, which begins with Spidey swinging through the city on his way to see Aunt May. She’s being transferred out of the hospital (Which, you may recall, she has been in for-ev-ver) to a nursing home today, and Peter wants to be there for her. On the way, he recaps how he’s recently been cleared of all murder charges, might be singing some Spidey merch deals, and needs to sort out his business with Betty Brant, in case we forgot what’s going on in this period (Weird how those issues of TAC were no help).

Kinda weird, right? It’s written like she’s going away forever. Maybe that was Marv Wolfman’s intent, but we all know that didn’t happen. Anyway, the doctor who’s always thinks Peter is a selfish jerk tells him how selfish a jerk he is, and a grief-stricken Peter almost smashes him before realizing what he’s doing.

Meanwhile, over at The Daily Bugle, JJJ is terrorizing everyone on staff into looking for his missing son. Robbie tells him he’s heard whoever kidnapped John has it in for both JJJ and Spider-Man (Funny how that doesn’t narrow it down…), and JJJ says if he has to become a target to save his son, he will. Elsewhere, Spider-Man recaps how the events of ASM 186, 187 & 188 seem related, making me think I shouldn’t have cut this block here (whoops), then we jump back to JJJ, who’s gone to see his beloved Marla to talk about his missing son.

Feels like some uncharacteristically bad storytelling by Byrne left Wolfman working overtime to make sense of that last page. Spider-Man swings off thinking he’s a big loser, and then we cut to JJJ telling a very frustrated DA Tower that he’s going to solve this himself. And that leads to him putting a million dollar reward out there on info leading to his son. We see this is enough money that even other criminals thinking about finding John.

Kinda hard to swallow, really. People always say Jameson is this great newspaper man, but all we ever see is him irrationally blaming Spider-Man for everything, and now trying to get revenge on Tower for an imagined slight. Makes you miss the days when Stan Lee would occasionally let JJJ be on the right side of a story. And as for Joe, JJJ treats him like garbage, and he just takes it. Joe’s like a saint in these books, why would he put up with this? Well, because, that’s why. Anyway. Sidetrack, the shadowy guy from earlier is pretty obviously Spencer Smythe, and he seems to think he’s dying of cancer so he’s gotta kill his enemies as soon as possible. To that end, hes juicing up some kinda mummy with a lot of power and a “radiation trace” for the coming battle. Alright!

People in 70s comics always, always, always go “MMMMmmMMMmmmmm” while they kiss. More evidence will be presented shortly. People are just humming into each other’s mouths at every opportunity. It’s a weird thing. Hey, another sidetrack. Later, Spider-Man swings through the city just in time to see the mummy scaling the Daily Bugle building. A battle in and around the building for Jameson ensues.

I don’t get Spidey’s dialogue across the top 3 panels at all. The fight continues out on the rooftops, the still shadowed and still obvious Smythe down on the street yelling commands into a remote (What?), until Spidey rips the bandages off his foe.

Did it really have to be? How? speaking of “how,” how is Smythe controlling Man-Wolf like a robot? Maybe some of this will make sense next issue. Probably not!