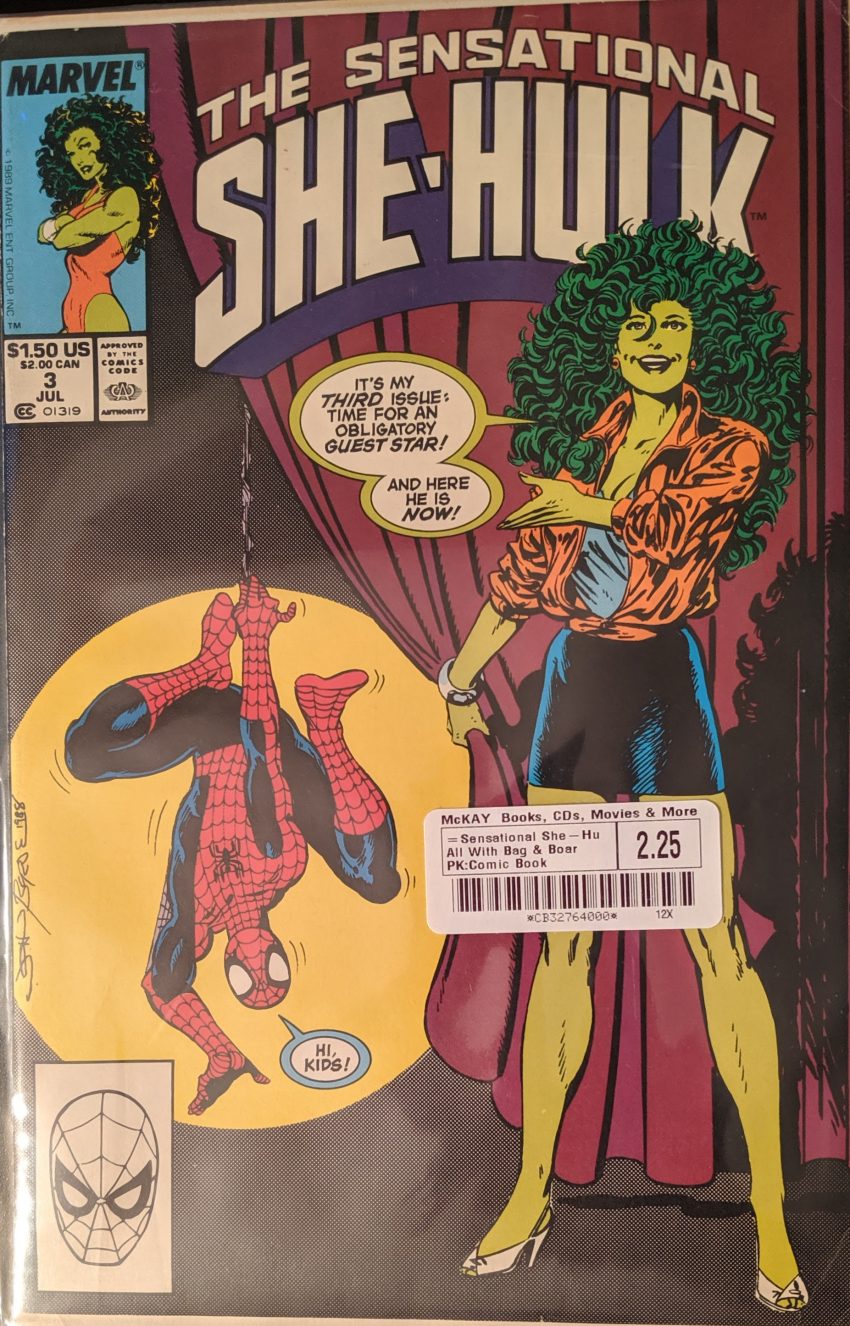 We interrupt our regularly scheduled programming for this relatively recent McKay’s purchase. She-Huk was created in the 70s, as I understand it, because people at Marvel heard the people making the Hulk TV show might make a female Hulk and wanted to secure legal rights. So Bruce Banner’s cousin Jennifer Walters got a blood transfusion from her cousin that lead to her becoming big green and mean when stressed. It didn’t last too long. Later, John Byrne would sub her onto the FF while The Thing was living on Battleworld, and take her in a very different direction. His She-Hulk retained Jen’s mind when Hulked out, and actually really enjoyed being a superhero. And that eventually led to him launching this She-Hulk series. A hallmark of this comic was Jen knowing she was in a comic book and breaking the fourth wall well before Deadpool ever did it. And look who’s in issue 3. I’ve previously only read issue 15 of this series, after Byrne had left (Included in the magical comic box I got for Christmas that one year as described elsewhere), so this will be all-new to me.

That’s weird right out of the gate. It’s hard not to view this through 2019 eyes. I know Byrne will come to resent the Image guys. Seems clear to me that it was straight up jealousy, the superstar of early 80s comics left in the dust by the new breed. But not yet, and seeing him do the ASM 300 cover is a surprise. And he’s doing the denser web pattern and the “spaghetti webs” and all that. What a team player!

We cut to weird mad scientists making a headless robot of She-Hulk for a bit, and then we get to the kind of business this comic really trafficked in:

Yeah. Look, I don’t know. The late 80s were a weird time. So I guess the mad scientists were “The Headmen.” Never heard of ‘em. Then we cut back to Spider-Man, who has already had his big battle with Mysterio while we weren’t looking, and reveals to his foe that he’s been tricked, and the briefcase full of cash he was carrying is all fake money (Why’d it set off his Spider Sense then?). Mysterio is so mad he gives up his employers. It’s the Headmen. That’s handy.

Thanks for the primer, Spidey. That will be helpful. Here’s those aforementioned weirdos:

Byrne might be falling out of favor in this moment, but you’d have to have some star power to get this published, I would say. What bizarre stuff. Spidey drops in and starts beating up everybody. No trouble, as is only correct. Then…

Woof. the gollira-body guy sez “This is ridiculous,” and boy, do I agree, and then all the bad guys attack Spidey together, allowing She-Hulk’s… body… to nab him and knock him out. We cut to She-Hulk’s supporting cast, which I really see no reason to get into considering we’ll never see them again, and then back to this:

I just… I can’t. Whatever. Chondu starts rampaging around angry about his new deal, which leads him to Spider-Man laid out on a table being examined by the other guy, and Spidey’s not into this.

Ok, that’s what I was thinking at first. Somewhat less ridiculous. This is followed by a weird sight gag involving She-Hulk editor Bobbie Chase and then Spidey and She-Hulk are chasing some kinda giant war machine with all the lames in it, and She-Hulk wants Spidey to put her down in front of it so she can rip it open, which she easily does.

And on that sub-Fozzie Bear level joke, we’re out. That was something. Really more of a Spider-Man comic, but not a very good one. The letter page features a truly surprising missive of praise from Byrne’s old partner Chris Claremont. I thought those guys hated each other by this point. Maybe that only went one way. I have come to really not care for Byrne over the years. He has revealed himself to be a bitter, mean, delusional old man unable to accept changes to the industry. And viewing pretty much any of his work through more mature eyes reveals he was just, like, the horniest dude in comics, rarely able to make it through an issue without getting a woman into some stage of undress (I mean, look at this one). As a kid, I thought he was cool. As an adult, he creeps me out more than anything. Come back next time for a more normal experience.