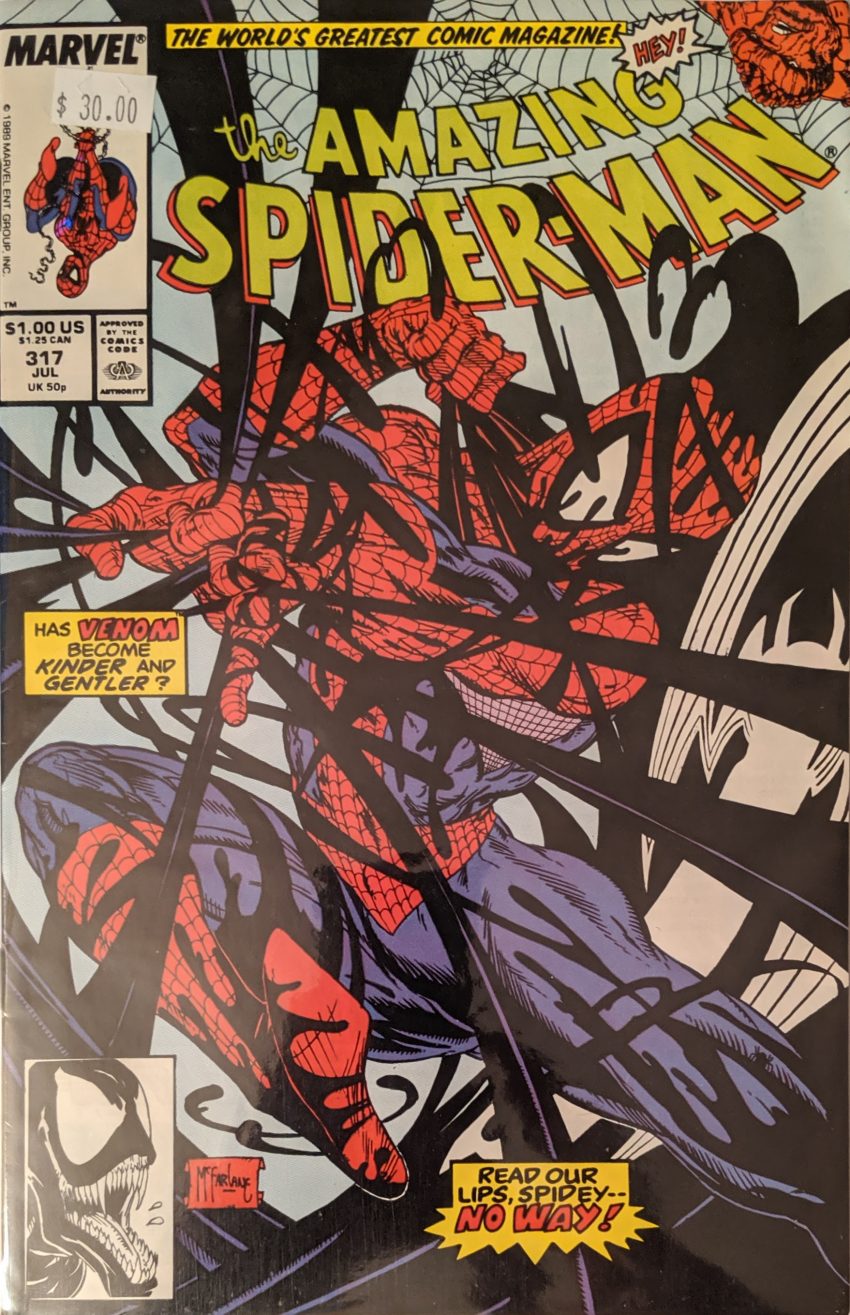 I paid more like $8. This one I replaced while buying up old comics. I have a pretty nice looking copy from my youth which, I somehow vaguely recall, was purchased from a comic book shop in Florida while on a family vacation. Why did I get a new one? Because, unbeknownst to me when I bought it, some absolute lunatic did this to my first copy:

They painted over 2 ads in the book. One purple, one red. It was sticking to the facing pages, chipping off, and generally being disgusting. I put some sheets of notebook paper in there to keep the paint from further ruining the book as a kid. So when I started thinking about buying old Spidey comics, this one was on the list. And now I have one that’s totally paint-free, so let’s look at that one. We open on Peter Parker super worried about Venom. He’s just glad his enemy doesn’t know where he lives. So he’s trying to act natural, and is about to take Aunt May shopping…

Not the last time McFarlane will do this weird hand reaction thing.

My beef with Venom has always been that he’s a one-trick pony. He’s just evil Spider-Man. He doesn’t have a life, a job, friends, or any goal except killing Spider-Man. He gets pretty boring pretty quick. But right now, he’s brand-new, and this is a pretty effective sequence. The most dangerous villain in Spider-Man’s life making nice with his Aunt. Full props for this.

Brock tells him that he happens to know The Daily Globe’s publisher has a fancy house that’s empty in winter, and wants to kill Spider-Man there at sunrise tomorrow. Then he just leaves. Peter switches to Spider-Man, deciding he needs to get some help. He saves a falling construction worker on his way, and then says the people he’s going to ask for help will probably laugh at him. Which, I guess, is just to set up this nonsensical page turn. This is not the first time Michelinie has done this:

What is a joke? What are you talking about? I believe we’ve already seen Ben after having been hit with a 2nd dose of Cosmic Rays and looking all weird like this. He’s close to changing back to normal, I think. Anyway, Spidey’s got some backup, except when he goes home, he finds Brock helping Aunt May fold laundry. He followed him to the FF’s place, of course, and without his Spider Sense, Peter had no idea. Brock says he has to come alone, threatening his family. But, like… If he brings The FF and The Avengers and whoever else wants to tag along, they would definitely beat Venom. So the risk seems minimal? I dunno, Peter’s buying it. Stuck, he goes to the one person he can always talk to.

So, Spidey goes to see… Dr. Charles Jefferson. You know, that dumb dumb who thought Doc Ock had so much to offer society back in ASM 296. It would be decades before I knew that, though, so when I read this, he was just some guy. Spidey says he has to talk to the doc about a matter of life & death, but what help could a (Seemingly terrible) psychiatrist be? Then we cut to the showdown.

The battle continues,with Venom sending tendrils of the alien under the sand to try to choke Spidey out and then punching him into a nearby boat house.

This bit in particular was super effective on young me. Venom seemed unstoppable. Spidey tries to get a tracer on Venom so he can finally use his Spider Sense, but the suit is alive and feels it immediately, so no dice. And then…

He sure got that suit off fast.

Not many superhero fights end with psychic shock brought on by unrequited love from outer space, you gotta give ‘em that. But if he plans to have the FF come capture Eddie, again, why not just bring the FF in the first place? It’s a bit off. At any rate, Venom is down for about as long as he was after their first fight after this. They weren’t overdoing it with their big new villain… yet. My personal feelings about Venom aside, he’s really the only villain the enter the A-List of Marvel characters this late in the game. You could make a case for Hobgoblin, but he still didn’t have the brand recognition of Venom even before the successful film. A friend of mine has a t-shirt with a ton of iconic Marvel characters on it, and the only one introduced after, like, 1973 is Venom. That’s quite an achievement.

This issue sets up the crucial rule that Eddie and the symbiote are permanently bonded. A rule that would be wholly ignored in the future as both the Venom and Carnage symbiotes get passed from person to person, irking me to no end, even today! But as long as we’re in Michelinie’s extremely long tenure, the rule stands. This wound up being the last time McFarlane drew a story with his co-creation, though. Aside from the cover to a collection of the Venom stories, he never drew Venom again. We’ll see how the character evolves without the visual half of his parentage soon enough.

YOU GUYS. I have seen the painted ads in my new copy of the book. They’re both for fantasy games. D&D and another one. It would appear some crazed religious fanatic could not handle the thought of Little Jimmy seeing this Satantic imagery and painted them! Insane!