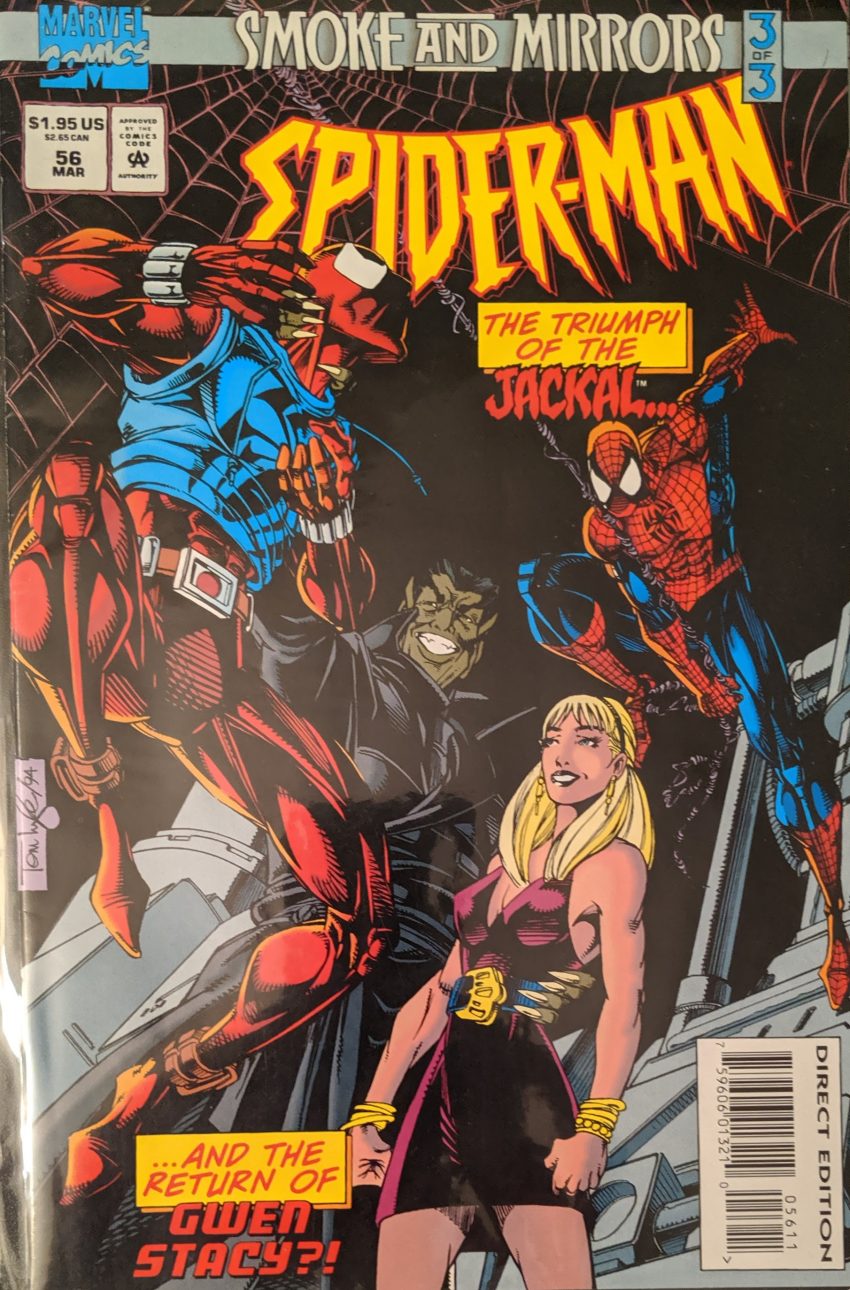 The gang’s all here. We pick up where last issue left off, Gwen emerging from her cocoon, Tom Lyle struggling with the concept of bangs. She inexplicably knows Peter Parker is Spider-Man. The Jackal suggests she get dressed before we go any further, telling the spiders to avert their eyes while she puts on some clothes (“You can stare all you like while she’s standing there nude, but for Heaven’s sake, don’t watch her dress!”).

Why, she’s with Mary Jane and Dr. Caputo. Doc says she’s stabilized, but she needs Peter to come by to discuss options. MJ begs her not to die, and we get another round of “What’s Aunt May Thinking?”

I know how you feel, May. Back at… wherever they are, Spider-Man is talking to Gwen while The Jackal taunts Ben about having spent the last 5 years on the road (How did he “keep tabs” on them? How could he possibly have that kind of network and reach?). Jack wants to know if he’s going to degenerate, as well, and gets swatted across the room for interrupting as The Jackal promises to tell Ben the truth. Remember how Ben knew about clone degeneration already a few issues ago when talking to Trainer? I do!

Taking him in for what exactly? Mind games? Revolutionizing everything we know about biology? Pick one, I guess, and take that, random piece of equipment! And there’s more for you where that came from, as…

We cut away to the unintentional comedy of Kaine watching all this while Scrier watches him watch all this (These mystery men really need to be more proactive in their lives). Then Jackal tells Ben he should go kill Peter, since he’s not a real person, and when Ben hesitates, Jackal starts attacking him, summoning Jack to help.

Wow, what an ironclad rebuttal of Conway’s retcon! “Why would it help him to tell you the truth? I mean, why would it help him to lie, also, but ssssshhhhh, don’t think about that, we got a lazy retcon of a retcon going here! Don’t consider that that random ‘Young God’ lady turned the Gwen clone into Joyce Delaney, and that she had nothing to do with The High Evolutionary! Those are just facts, they have no business in this terrible mess of a story!” Also: is no one going to address the fact that Gwen is probably still a teenager? I know it hasn’t been 15 years in the comic, but it HAS been 5. And that’s since the clone mess, maybe another year since Gwen died. Those are some pivotal years. Jackal tries to convince Peter to give up his life for Gwen, but he stands firm, no matter how sad Gwen gets. Which works out, because…

Jackal cracks up laughing at how great all this is, and the Spider-Boys attack him. As The Jackal walks into a mirror somehow, he says the honest-to-goodness, cross-my-heart-and-hope-to-die-truth is neither of them is real, and also, that the place is about to explode, and also also, that the real Peter is in there with them somewhere. They try to break through the mirror, but it won’t give. Jack tells them to get to the door instead, so they can live, and they take off.

Golly, what could that be? So, like, The Jackal is being pretty aggressively set up as a sort of Joker for Spider-Man. Boy, was I not on board for this, as a youth. I started to get into it last post, but with the appearance of this new Jackal, I finally began to smell a rat. Sure, I hated grimdark Spider-Man, but I suffered through it, and like seemingly most of the comics-reading public, I was caught up in the hype around this clone business. But the introduction of this extremely lame new version of The Jackal coupled with the implication that there was a lot more clone nonsense going on AND all these goofy mystery men floating around was too much. Too convoluted, too silly, too… not Spider-Man. Even at the height of his emo nonsense, Spidey was still swinging around fighting villains and stuff. What is this? Some sort of goofy scifi soap opera? When do we get back to actual Spider-Man comics? Even my stupid teenage self could see the cracks forming. And yet… it was only getting started.