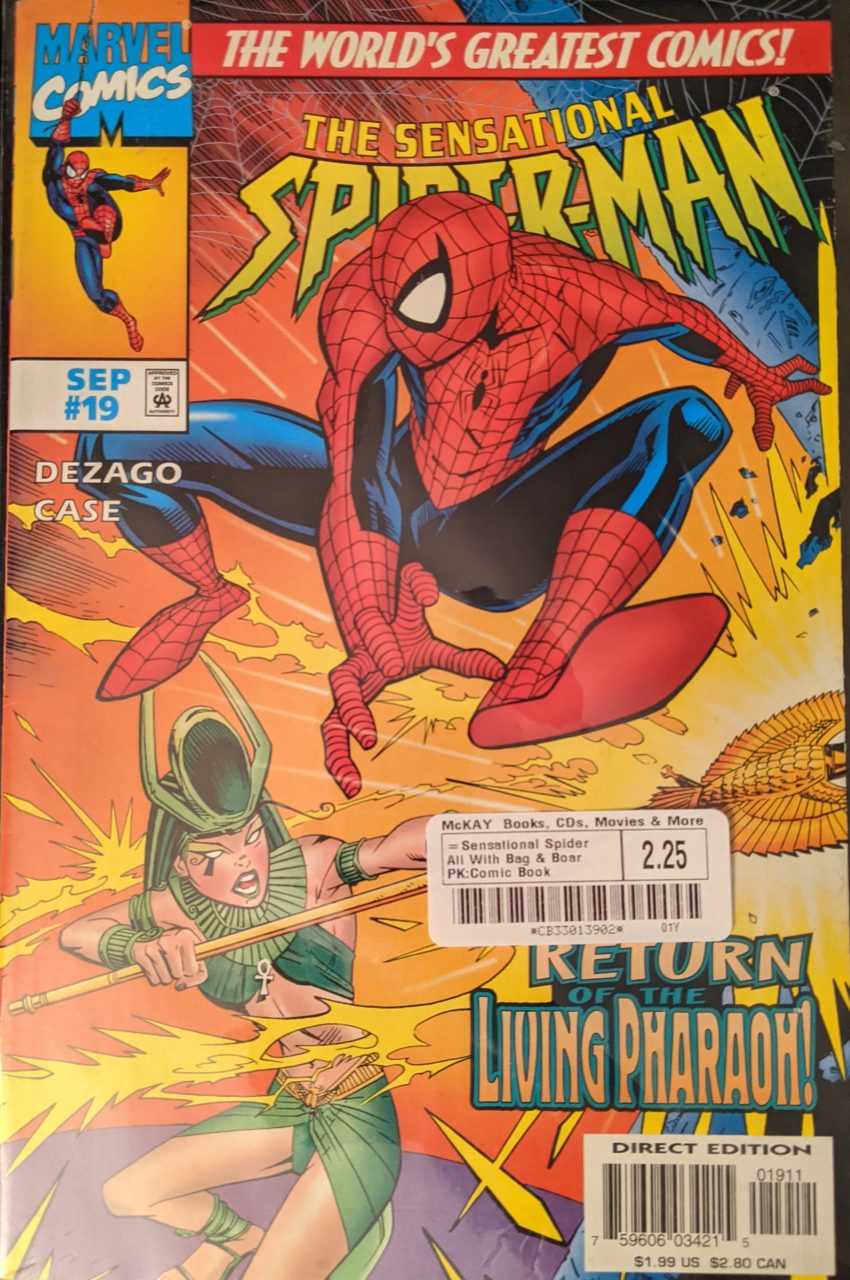 Boy, that “prologue” in SSM 18 leading into this feels like forever ago. Too much product in this era, man. I got 6 blocks left from various points before Spider-Man had 3 or more monthly titles, and I am going to enjoy them. This issue, Richard Case not only tags back in on pencils in addition to inks, but also gets a story credit. Really doin’ it. Todd DeZago scripts, Gregory Wright colors. I was gonna say it’s been awhile since The Living Pharaoh appeared on this blog, but it turns out that issue isn’t up yet, so nevermind. Suffice it to say, this is a new look for the character. This issue opens with a young lady biking through the desert in Utah, outrunning her friends and seeing something crash out of the sky.

“I think our friend’s totally done, bro!” Meanwhile, in New York, Spider-Man was headed home with an armful of groceries when he spotted Ye Olde Mugging In Progress, and stops to do his thing.

Putting the banana in the guy’s hand is funny, but that’s really not how his web works.

Got some real Looney Tunes energy this month. Elsewhere, Akasha from earlier tells herself she had a dream that she was a dude and a pharaoh in ancient Egypt. She lived his whole life in her dream, and then died and lived a few more besides. She is, of course, reliving the lives of The Living Pharaoh, including his last encounter with Spider-Man, before ol’ LP wound up tossed into space, floating around since the 80s or so, I think, until crashing back down last issue.

Why is her mom white? And hair color aside, those feds are clearly supposed to be Mulder & Scully. Anyway, guess what, you’ll never believe it, but there’s an Egypitan Expo at the museum, and guess what, Peter Parker has been assigned to get photos of it, and guess what, Akasha has gone to see her dad in New York because her mom was smothering her after the accident, so we have vvvvvery rapidly gotten everyone in the same place.

Nothing good ever happens to Peter Parker at museums. The Basilisk. Kulan Gath. What’s about to happen here. &etc. I was him, you couldn’t pay me to go to one.

Peter dives MJ to safety, but they’re almost trampled by fleeing visitors. A quick change later, Spider-Man is on the scene, and finds Akasha’s dad saying his daughter is still in the exhibit, which is now filled with a blinding glow. Inside, he finds her holding the staff…

Akasha’s dad tries to talk to her, and Spider-Man calls him “snacky” as he so often does in Todd DeZago comics, which I just hate so, so much, and then Akasha belts her dad across the room saying “I am more than her” before recognizing Spider-Man as a past foe and shooting some beams at him. After a good deal of dodging and one staff in the face, Spidey tries to web the weapon out of her hands.

Spidey was able to be a bit more definitive cutting the power source last time. It’s a shame that issue’s not up yet. Ah, well. More on this next time.