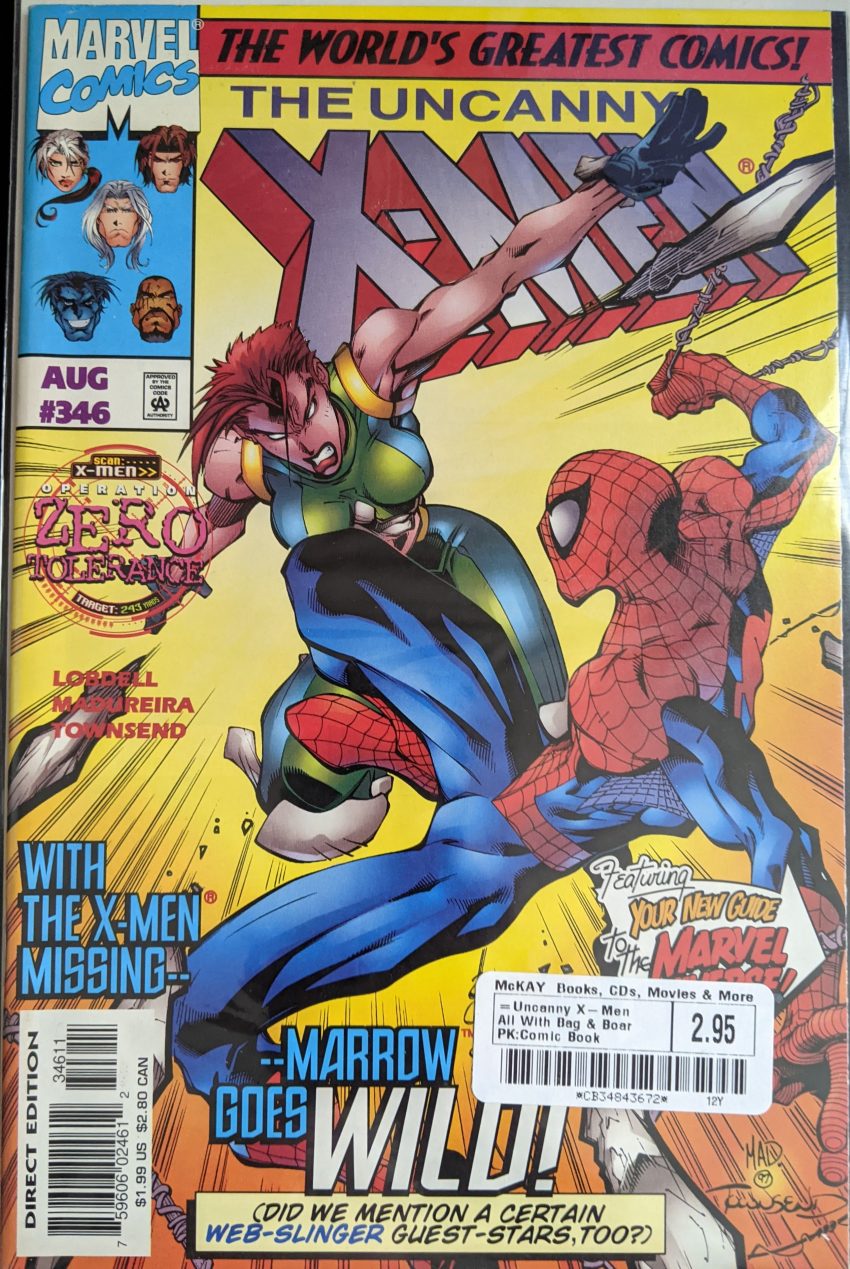 An issue of X-Men hits the blog after a long absence. I’m pretty glad of it, too, because it puts Joe Maduriera on the blog during the period so many people are copying him. I didn’t manage to get a Jim Lee comic on as a source for all the people aping him, but that’s his fault for not drawing those 2 Punishers Spider-Man was in. So I’m glad this is here. The earliest time I saw Joe Mad’s (Uncredited) art was in an ad for a 900 number Spider-Man “game,” so I kind of associate him with Spidey even though he didn’t work on the books. Did I pay too much for this? Almost certainly. I mean, Marrow is on the cover. During this period, the X-Men started to welcome some pretty bizarre members, like Maggot, who, uh, had a bunch of maggots he controlled, and Marrow, whose bones grew out her body and which she used as projectile weapons. I mean, that’s weird. The X-Men are in the midst of Operation: Zero Tolerance, an aggressive new take on the whole “hated and feared by humanity” bit. Thanks to the newly minted recap pages, we can just see what’s going on:

Hilariously to me, that recap barely explains anything. That’s The X-Men for you. It’s so dense and self-referential I don’t know how anyone got into it. By this point, the X-Men line is an empire, with 2 separate teams of X-Men, X-Factor, X-Force, Excalibur and Generation X teams running around, not to mention solo titles for recent Spider-Man guest X-Man, Wolverine, Deadpool, sometimes Gambit and others. It makes keeping up with only 4 monthly titles seem like a breeze, but at least buying 15 X-Books meant seeing 15 different teams. 4 monthlies for one guy is kinda nuts. Speaking of that guy…

Right on page one. Rude of them to leave out first names in the credits when I’m only dropping in for one issue. Scott Lobdell, Joe Madureira, I guess Humberto Ramos?, Tim Townsend and Steven Buccelato. Ramos is gonna show up plenty in future Spider-Man comics, and I will not enjoy one page of it. We begin with some exposition that also functions as a nice moment for JJJ:

Kudos to Lobdell for name checking so many Spider-Man characters, tho he should’ve maybe used Peter’s current professor instead of his previous one (Not that I’ve even retained the current guy’s name, as little as he’s appeared in the titles. Doc Swann didn’t manage to get on on-panel much, either, but he’s integral to his era compared to the new guy). So, obviously, you can see the influence Mad has been having on the art in current Spider-Titles (And the whole rest of the comics industry). They called his art “manga influenced,” but I’ve always felt like that was a misnomer. I mean, yes, you can see some influence from that sort of late 90s, Evangelion-type manga/anime style, but nobody’d ever mistake this for a Japanese comic book. Madureira’s earliest art had a lot more in common with Art Adams and Michael Golden than the Japanese style of the period. It’s a distinct fusion of several sources, and was pretty uniquely his own until so many people started blatantly copying him. Anyway! Elsewhere in town, Peter Parker has caught up with Gyrich, and is internally freaking out about Operation: Zero Tolerance. He snaps a picture of Gyrich and notes he doesn’t look happy about all this. Gyrich is a complicated figure. He started out at the government liaison to The Avengers, and has since shown up as their representative in various contexts with his catch phrase “I’m the government, mister!” He is coarse, rude, rigidly follows orders and is often not on the right side of history, but he usually thinks he’s doing the right thing. Maybe not this time. Switching to Spider-Man, Peter thinks about how, despite having been hounded much of his career, he can just take his mask off, but mutants don’t have that luxury. He wonders what that would be like.

7 pages into this X-Men comic, some members of its cast show up.

Marrow here is part of the nascent trend that will only continue where certain characters have different speech visuals. Deadpool’s dialogue is only in yellow balloons. We’ve seen Delilah’s nonsensical font & color changes. Asgardians begin to get a serif font to seem fancier. And rough’n’tough fold like Marrow get a more raggedy font. All of this just makes comics harder to read and is stupid. Anyway, we cut away to Gambit trapped on an alien planet after whatever happened last issue, and then to JJJ yelling at a senator on the phone about how Bastion can’t be trusted and may have had one of his reporters killed. Then Bastion appears in JJJ’s office.

Back at Gyrich’s wrecked car, Callisto explains what a Morlock is and says they don’t want to kill him, just have their voices heard. When Spider-Man puts himself between the mutants and Gyrich, Marrow takes a decidedly different stance and chucks a bunch of her bone knives at Gyrich with the intent to kill.

Yeah, these goons and Bastion himself are all human hybrid Sentinels. Maybe Marrow’s not an X-Man yet, also, I dunno. The head Sentinel blasts at Marrow & Spider-Man, but Calisto jumps in front of it. Back at The Bugle, Bastion explains that the disc he brought has a database of all known mutants and their civilian names on it. He tries to entice JJJ to publish the info, saying he’d win a Pulitzer (I don’t know if doxxing millions of private citizens would do that, but ok). Back at the fight, the Sentinels decide their secret is compromised and every living thing here has to die, Gyrich included. Also, as Spidey leaps into action to rescue Gyrich, Mad continues to sometimes forget to draw the stripe on Spider-Man’s arm, like he did on the cover.

Quelle surprise. Gyrich and the cops just shoot the Sentinels, and that works. Really? How simple. Gyrich says that probably won’t stop them, but will give him a chance to get the non-powered folks out, saying the Sentinels were at least as much a threat as the mutants they almost killed. Marrow wants to kill him all over again for the “threat” comment, but Spidey webs her to a wall and tells her Calisto almost gave her life for Marrow, and he won’t let her throw it away. Now she wants to kill him, too. Delightful young woman. Back at The Bugle, JJJ changes the topic, saying he’s been researching Bastion for weeks, and shows him what he’s come up with: nothing. He wants to know how someone who doesn’t seem to exist suddenly has so much power.

Is Spider-Man’s talk with Marrow what leads her to join The X-Men? That would be kinda fun. On a final page, Robbie asks JJJ what the fire in his office was all about, and he sullenly says nothing. Bastion is, of course, eventually revealed to be a very bad guy (Ludicrously complicated in true X-Men fashion and the government turns on him and suddenly realizes hunting people in the street is bad. Again. Marrow goes on to join The X-Men for a little while. And Spidey goes back to his own books. After another unusual detour next post. This was a weird issue of X-Men. One regular cast member appeared on one page. Mostly it was a J. Jonah Jameson comic, really, with a Spider-Man B-plot guest starring 2 mutants who were not X-Men. Wonder what X-Men fans thought about that.