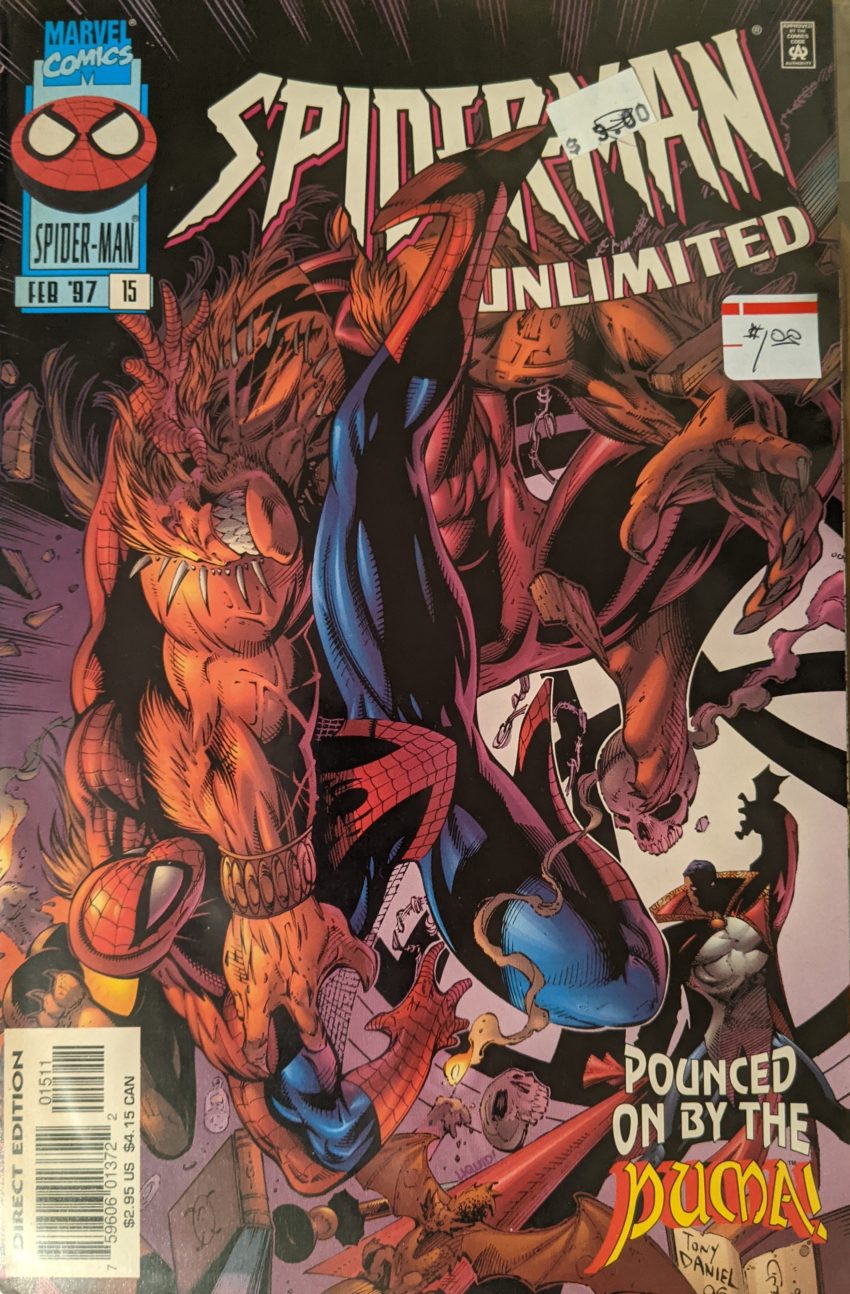 Well, this is a surprise, I must say. This issue features Tom DeFalco and Joe Bennett. So much of SMU has just been no-name guys and rank amateurs slopping out 64 pages of dreck to fill a deadline during its publication history, I’d given up on even the possibility of a professional product here. I guess, looking back, Bennett has drawn the last 2 issues, as well, it’s just been a long time since I saw them. But those were still for a no-name writer. That $1 sticker identifies this as one of a few I got at my local flea market. $2.95 cover price, $1 to make it stop taking up space in that guy’s boxes. Will it be worth ⅓ the original asking price? Probably not! Looks like Puma and Dr. Strange both are in this. Tim Dzon and Ian Laughlin round out the team. We’re told it’s the week between Christmas and New Year’s and MJ & Aunt Anna have gone to visit Gayle and the kids, leaving Peter alone with his thoughts about how messed up life has been “in the last year,” so he heads out to ignore his feelings as Spider-Man. Still insane to me that they decided the previous 20 years of comics was just 5 in-continuity, and then allowed themselves to have a whole year pass between ASM 390 and 418. The hubris. That’s, what, 3 years and change? That’s like a week on their scale. But their comics are more important than the last 20 years of comics, so the sliding time scale can speed up for them. Now it’s been over 20 years since this and I doubt Marvel would concede Peter Parker has aged a day. MJ retroactively took her child to term in like 15 minutes, Beat that, Wandavision! At any rate, our man swings around and does feel more jovial, but then gets the feeling he’s being watch as we see Puma’s green eyes peeking out from the darkness of an alleyway.

Puma was in a very weird place last time we saw him. Meanwhile, Dr. Strange is chillin’ in the crib when he feels a disturbance, and gets all magical to seek out its source as we once again see Puma eyes in an isolated panel. But then…

It’s just his uncle, tho, who always appeared in the old DeFalco stories, come to make Fireheart uncomfortable as usual. He’s come with a bunch of junk food for himself and raw veggies and water for Thomas.

Puma’s uncle recaps his deal across 2 pages, his whole deal, from his first appearance through the Beyonder nonsense to being a more animal version of himself last time we saw him like Thomas doesn’t know all that.

This is all dopey and kinda painful, but casually tossing in the cosmic brothers from DC Vs. Marvel is pretty funny. Also, for the guy who created Fireheart’s uncle, DeFalco sure is writing him as a completely different person. Back in New York, Spider-Man contemplates the Puma doll, wondering about where it came from, when a zap from his Spider Sense gets him on guard. At the same time, Dr. Strange feels a disturbance again and astral projects to go see. Spider-Man begins dodginz some zaps and quippin’ it up and then we see what’s after him, and…

…boy is it lame. Also looks a lot like The Shocker turned into a lizard, and seemingly by accident. Very weird. Spidey lunges at the thing and gives it a pop, but it backhands him across the alley and runs off. Strange’s astral form shows up and determines Spidey’s ok, but that a great evil surrounds that dumb lizard and he returns home to cast some spells about it. In New Mexico, Fireheart is notified someone ransacked his uncle’s place and his uncle is missing, and when he goes to investigate, he finds markings on the wall, including a drawing of a spider.

I’m not sure this lines up with where Conway left the relationship between Spidey & Puma, but it sure is the dynamic DeFalco had in place years prior.

Ol’ Doc Strange sure isn’t willing to properly enter this story. Fireheart is waiting for Spider-Man to arrive at their meeting place when some typically embarrassing DeFalco gang bangers start threatening him. Spidey arrives and they run the hoods off. He shows Thomas the Puma fetish he found, and Thomas tells him he found a spider drawn in his uncle’s house, while nearby, Dr. Strange senses the big evil rift he was after is opening. And then Spidey has to dive Fireheart out of the way of a zap.

Spidey, Fireheart and Dr. Strange’s ghost are all transported to… somewhere else. “Raptar” senses Strange is with them, and Spider-Man refuses to believe any of this is real. Too many fights with Mysterio is his explanation, as if he hasn’t been to space several times.

Man, what is the deal with DeFalco? What is with people saying things like “are you surrrrre” all over this comic? “A confederate or creation?” Who talks like that? This is awful. Spidey & Fireheart find themselves in a jungle, and our dumb hero finally begins to believe this is really happening as Strange finds he can’t beat “Raptar” and flees for the moment. Spidey & Fireheart bicker about Fireheart’s past as a mercenary for awhile until Fireheart is almost shot with an arrow. Some kinda primitives appear, and seeing the Puma fetish Thomas is holding, begin to worship him like he’s C-3P0.

Painful. Spidey and Fireheart are taken to ruins with a big cat statue and then to the tribe’s shaman.

Spider-Man gives Thomas a talk about how he can’t let his baggage overwhelm his life as he decides to go back into the ship and try to find a way home. Uncle and Strange continue moving through the ship, Uncle being very mysterious and acting like maybe he’s some ancient mystic or something. Spidey and Fireheart get back in the ship and split up, with Thomas going to find his uncle and Spider-Man going to look for a way home. And soon, Thomas runs into this guy, who greets him by name without seeing him while communing with a snake man or something.

Ok, whatever. This is a very aggressive and seemingly wholly unnecessary retcon. Spidey finds some controls and begins trying to decipher them as aliens attack him, and then of course the white haired guy turned out to be “Raptar,” who turns into a snake man the way Thomas turns into a cat man. Spidey beats up his assailants and learns their robots and then we cut back to Thomas.

Elsewhere, Spider-Man has somehow figured out the controls to the ship and Dr. Strange has floated back into the story to say he can tell Spider-Man has things under control, so he’s gonna disable all the systems in the ship except Spidey’s controls because “Raptar” said the ship is his power source. Whatever. Ready for this to be over. Puma tells his dumb foe he seems to  know more about him than he does, and wants to know how.

This dialogue is seriously miserable. Hard to believe this is the dude who wrote ASM 259. Time makes fools of us all. Glad that’s over. Not really worth the dollar. Joe Bennett’s another guy I’ve begun to revise my opinion of through this blog, tho. Well, the Joe Bennett of this period, anyway, I already like his later stuff. This is very of its time, but it’s better than Luke Ross, to give but one example. Within the milieu of mid-to-late 90s superhero comics, you could do worse.