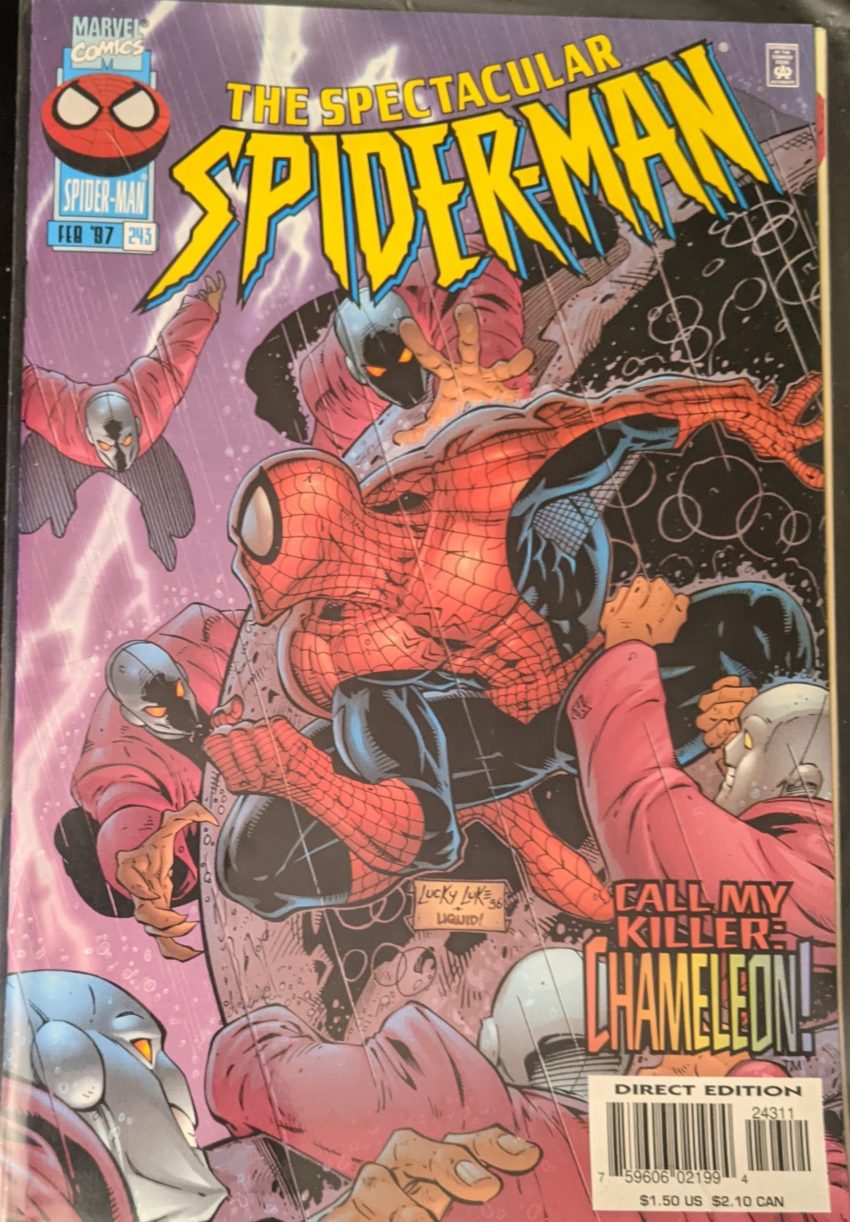 I’m reading these things so far ahead of when they’re published that once in awhile I take days or weeks off and it doesn’t matter. I’m not even sure when I read TAC 242. Maybe only 3 days ago, maybe a week, I dunno. But, I’m back. Lookit all those Chameleons. Oddly, the back half of this book is a few centimeters wider than the front. You can see exactly where the staples are by which page is peeking out there. But the cover doesn’t look wrapped or cut wrong in the printing process. Weird. Hey, maybe talk about the comic inside. Ok, I will.

It’s the Jack O’Lantern who’s been haunting TAC for a few issues. Of course, the original Jack became the 2nd Hobgoblin, so who’s this guy? I don’t know that I ever found out. A lot of “mysterious” new versions of old villains were introduced in this period whose identities I didn’t bother to learn. Chief among them The Black Tarantula, but also this guy and a possibly new/possibly the original Rose. And this Jack is apparently Irish, which, I mean, sure, but how he relates to the original seems like it’ll be hard to explain.

Oh, man, did Ross whiff the panel of his head getting shot off. Terrible angle.

“Some guy with my exact name and outfit was around, but don’t worry, I’m here to assert that I’M the real one and HE was the fake!” is really lame. Also lame: Luke Ross’s faux J. Scott Campbell art is not even remotely working for what’s supposed to be spooky, gruesome events here. Anyway, Jack starts laughing and then we cut to Ashley Kafka with her patient, Spider-Man, who, as you may recall, is not Peter Parker, but some guy who looks like an extra from a mobster movie who seems to have amnesia, because not much makes sense around TAC lately. He wonders aloud who he is, and then we get this:

Herbert rejects all this, and Kafka reminds us she’s probably Chameleon working a ridiculously elaborate scheme here (I sure don’t recall). Herbert tries to prove he’s Spider-Man by climbing a wall, but can’t.

Good time superhero adventure, back again. Herbert relents and begs for help. Dr. Kafka says they’ve made real progress today and walks out of the room, dropping the disguise and turning back into Chameleon, who is thrilled by his scheme. Meanwhile, the real Dr. Kafka rolls up to the van John was in in what is either a police car or a security car from the institute., I dunno. We never see it or its driver up close. As Kakfa jumps out, spying John.

Man, I don’t remember this romance, either. I wonder whatever happened to John’s old fiance. If their breakup even got shown on-panel. I know that, between appearances in Spider-Man in the 70s, they tried to make Man-Wolf some kinda sword & sorcery space hero in the vein of John Carter of Mars in Marvel Premiere, if you can believe that. And I know once he was “cure” of being a werewolf in TAC Annual 3, he wandered off to be part of the Avengers’ support staff and Captain America’s personal pilot. But whatever happened to… Was it Kristen? I dunno. Probably doesn’t matter. We learn Jack O’ Lantern’s cat is named Maguire (very important) and that he’s planning to use John to get revenge on JJJ. Not that we know what he’s got against JJJ yet. Meanwhile, Flash Thompson is not as perked up by Spider-Man’s pep talk as he seemed, and is moping around until he decides to… call Betty Brant. Healthy choice! She answers, and even though it’s the middle of the night, says if he needs to talk, she’s there. Meanwhile…

Why does the illusion remove the lil’ tabs on the corners of the photos? “Dr. Kafka” runs in, seeing her “patient” getting upset and saying he needs another sedative. When asked if he trusts her, “Herbert” says of course, they’ve known each other for years, which is  not what Chameleon wants him to be thinking right now, but it’s too late.

Our man remembers who he is, and Chameleon drops the ruse. Chameleon tries to talk his way out of gettin’ whupped by pretending to be a confused victim, and when that doesn’t work, makes it clear he knows he’s talking to Peter Parker and can ruin his life. But Peter yells “I don’t care!” while hitting Chameleon so hard his mask shatters around one eye. I was under the impression that was just his face now rather than a mask.

Oh goody. Just what we needed.