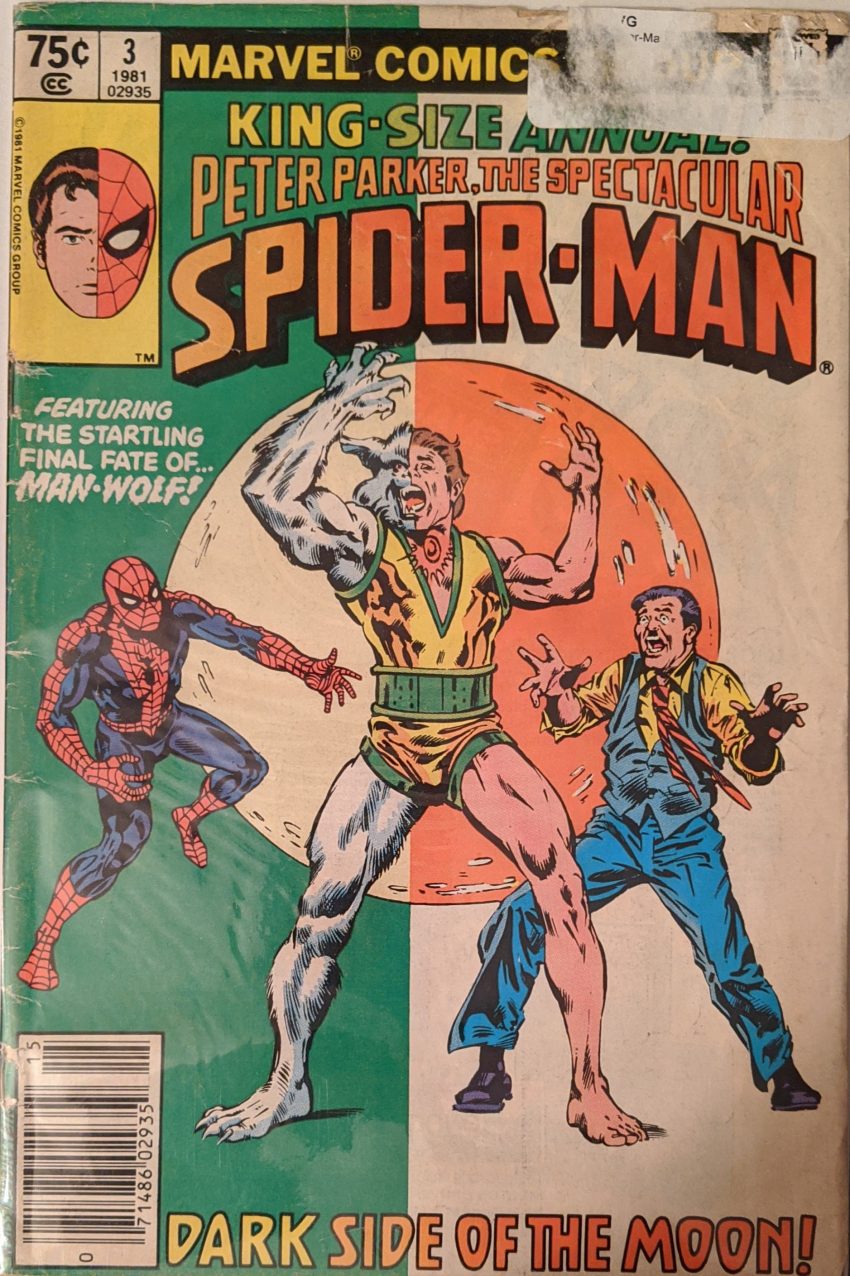 The final fate of the Man-Wolf, eh? Seems unlikely! David Kraft writes, Jim Sherman & Allen Weiss pencil, Steve Mitchell inks. Page one, Man-Wolf is on the loose! We’ve not seen him since he disappeared in a flash of light back in ASM 190, and he seems to be reappearing in the same flash of light to terrorize people on the street.

Lance Bannon, human repository of Man-Wolf stats! The thing that is sometimes John Jameson uproots a tree, fights a car and wins before we leave that ruckus to check in with Peter Parker at ESU…

Guys, call me crazy, but I feel like this is going to be Chekov’s Bio-Magnetic Converter. Spider-Man leaps down into the storm and is shocked to find his opponent is Man-Wolf. He chases him around awhile, and then M-W starts scaling a building, so Spidey follows.

SKAMM! Turns out, Man-Wolf has instinctively gone to the home of his one time love, Kristine Saunders. And when he gets there, he even turns back into John Jameson. She passes out when she sees him, and he thinks to himself that he has no idea where he’s been since we last saw him. The next day, Peter Parker can’t bring himself to turn in his photos of the battle the night before. He doesn’t want to rile up Jonah. Lance Bannon isn’t as smart, though, so…

Later, Spider-Man swings across town looking for Man-Wolf. He put a tracer on him, and when he homes in on its signal, he sees Kristine & John in her apartment, and… smashes through the window. They weren’t doing anything scary, Spidey, why do that to Kristine? John is glad to see Spider-Man, but reiterates he doesn’t know where he’s been (But, apparently, people who read Marvel Premiere #41 do. That’s not me, though, so maybe it’ll come up).

JJJ looking legit terrifying on the bottom left, yeesh. Hes furious that Spider-Man is there, so Spidey leaves, but soon all of them are gathered in Dr. Connors’ lab, where he wants to use his Bio-Magnetic Field to help John! Oh my goodness, what a shock! But they need time to study him first, so they put him in a steel vault used for experiments in the 60s and unused since. Almost the second they put him in, John turns into Man-Wolf, but he harmlessly attacks the walls before collapsing and turning back. Hours later, Connors has determined John will have to be in wolf mode for this treatment to work, so they’ll have to find a way to sedate him. Meanwhile, JJJ is losing his mind and planning to sabotage the whole thing. That can’t end well. At nightfall, they put John back in the vault, and then Jonah loses it completely, deciding everyone is plotting against John and that he has to free him. Yeah.

So, Spidey is going to have to fight Man-Wolf in this little lab with a bunch of people in danger. Good job, Jonah. Then a security guard runs and and tries to shoot Man-Wolf, but Kristine knocks him over. Kristine tries to reason with Man-Wolf, but it doesn’t work. Spider-Man dives into him before he can kill her.

Spider-Man is already pretty banged up, but he puts everything he has into one last punch, and Man-Wolf is out. Spidey hauls him back up to the lab over the objections of a raving JJJ, and then he & Connors get to work on the potential cure. It seems to work for a second, Man-Wolf reverting to normal, but then he changes back, and seems to be fluctuating between forms.

JJJ grabs him and starts trying to command him to turn back to normal, and to his credit, I guess, as John shifts back to wolf form, he finds himself unable to kill his dad. But then he does slap him across the room. Suddenly, Man-Wolf howls in agony and collapses, and the Moonstone that gives him his condition falls out of his body and disintegrates.

The End. For now. I’m pretty sure John becomes the Man-Wolf again, though I can’t quite picture it off hand. Maybe we’ll see.

The rest of the book is a series of bonus features. First up: Aunt May’s photo album, by Roger Stern, Marie Severin & John Romita, Sr.  It’s a fun little trip through her own early days, and then Peter’s.

Weird how Romita’s influence disappears completely on the last page. But I really like this stuff, especially the last 2 pictures. Those are such “real” moments, and surely weren’t in an actual comic. Nicely done. Next up, there’s a floorplan of the offices at ESU where Peter works, and then a page detailing who he works with there, in case you don’t know.

(Dr. Sloan: Neither pal nor gal). Finally, there’s a gallery of 70s villains with great art by Keith Pollard. Solid back matter. Not all annuals are so lucky.