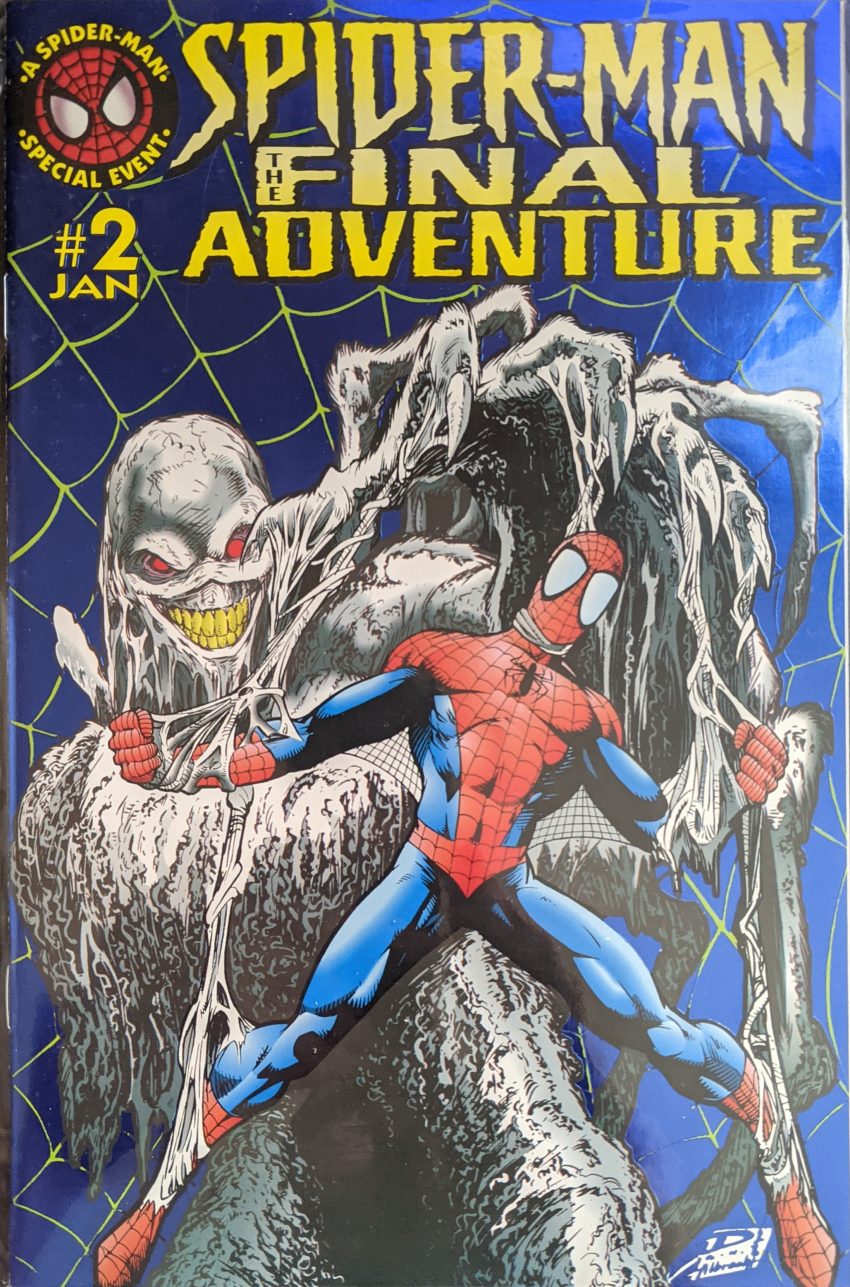 Shiny blue cover this time. Well worth the extra cost! These “fancy” cardstock covers include back covers like a real book, with a blurb to entice the reader. This one includes “The is Spider-Man’s final adventure… and it may just be his greatest!” Either cynical marketing or delirious hubris, that. To open, a guy walks out of a bar, internal monologuing. But not for long.

Odd lookin’ villain we got here. Turns out, this is his 3rd victim. It’s been a week since last issue. Peter is at a meeting the next day where, during recapping, it’s confirmed Verys is the new serial killer in Portland, as they have (Somehow?) matched the residue he leaves behind to Verys’ DNA. Boss man wants to go to the police, but owner man says it would ruin the business. Security man says he and his men can capture Verys first. Talk about hubris.

Schwinner gives Cal until 5pm to finish this, or he goes to the cops. And Peter Parker? Well, he’s just lying about not being able to tell what Monica did before she and the guards were killed. And he’s been searching for Verys himself, as Spider-Man, which hasn’t made MJ too happy.

Not a good time for their relationship, seems like. But as Spider-Man heads out to do what he feels he must, Ken Ellis calls the house. He tells MJ he’s following up on the trial and she hangs up on him. I mean, understandably, but he takes it to mean she’s hiding something. “Hi, I’m trying to dredge up the story of how your husband was accused of murder. What? You’re not happy about this?” Ken Ellis sucks.

At least someone’s finally suspicious of this absurdly suspicious plotline. And this raises an important question that every story where Peter is trying to superhero somewhere Spider-Man shouldn’t be does: Why is he wearing the suit??? I mean, I know why, it’s to sell the comic. But, like the McFarlane Wolverine thing awhile back, if Spider-Man’s not supposed to be there, put on a ski mask and do your thing! Or like the McFarlane Morbius thing, if he just needed to be wearing black, why’d he need a spider suit? Just put on black clothes! That he wears the suit sometimes he shouldn’t only because he has to be Spider-Man in a Spider-Man comic really sucks. But he’s doing it, and thinking to himself as he goes to follow Cal’s van how he can’t stop. How Spider-Man is who he is, no matter what he thought having a kid would do. He also mentions his webshooters don’t work anymore, which is news to me. Why? Shouldn’t that have come up before now? Isn’t he the brilliant scientist who invented them?

Fabian Nicieza loves the word “feeb.” We are 200% not on the same page RE: this topic, and never were. His over use of this word and the phrase “caught you napping” in the X-Books irked me even as a child. Wonder if Spidey will catch anyone napping in this. Fair odds! Swinging under a bridge on his makeshift web, Spidey tells us their findings suggest Verys’ new body “has become like wet cotton. Incredibly tensile, but stretched thin.” Uh… like a spider?

This looks well after the 5pm deadline to me. One of the guards goes to free the one victim who’s still alive, and finds the stuff they’re wrapped up in is Verys himself. The guard fires a “plasma rifle” (Standard issue in Portland security firms in 1995?) with the improbable sound effect “PHOONTA!” but it has no effect. So Spidey tries kicking Verys in the face, also no effect. But the momentum of the attempt takes them out from under the bridge…

Funny how often our man has to dive into the ocean. Soon, he’s arrived home, still dripping wet, MJ watching him on the news. He wonders how he can fight a guy made of webs, and MJ says she doesn’t care. She wants to know what she’ll tell their child when it has to grow up without a father. Their argument ends in a stalemate. I think I’m on her side here. Back at GARID, Cal wants to know why Galannan tipped off the news. He figured out where Verys would go on some very flimsy supposition and sent the news so, when Cal and his men caught Verys, they’d look like heroes. What a guy, this guy.

Dryrot? Peer is working on a sample he couldn’t possibly have? He is so dumb in this comic! Once the bosses finish meeting with the law, Peter says he might have something, but he needs to know how Staphos synthesized her serum. And to his shock (Tho one wonders why it’s so shocking if one thinks about it for more than a second), is soon taken to the modernized but still recognizable machine that made him Spider-Man. I mean, he knows this company made that machine. He knows Staphos’ serum was like what happened to him. He knows he works for the inventor of that machine. Put it together, buddy.

Boy oh boy. I don’t know where, exactly, in this process it was decided that Peter would come back to replace Ben, but it almost had to have happened before this issue saw print. Why create this issue with 2 Spider-Men? And in an ancillary title, no less! This is the biggest threat to both Peter AND Ben, and it’s in this overpriced miniseries not everyone was buying. What a decision. Also, MJ left. I mean, who believes she’d really leave? Not much of a cliffhanger, there. But we’ll see how it plays out.