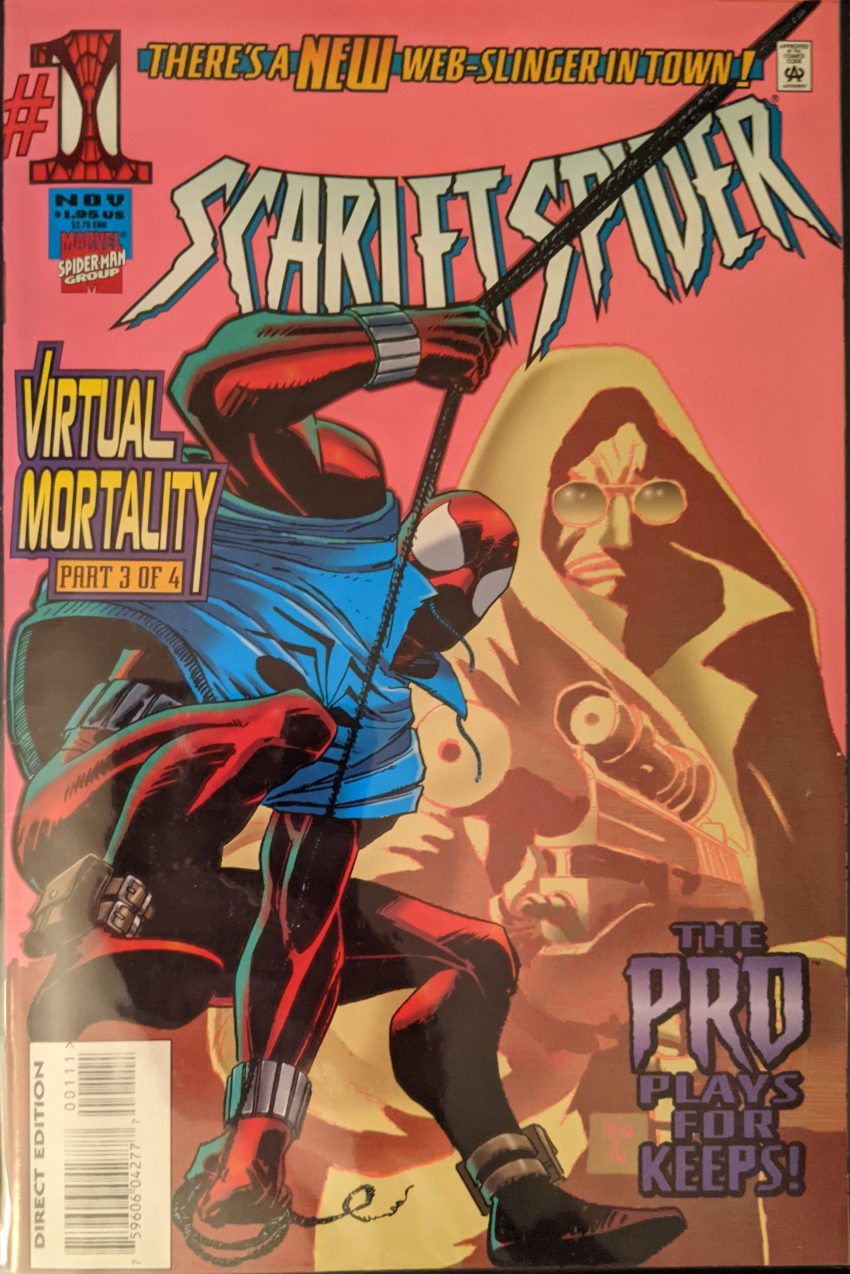 Oh ho! A Romita, Jr. cover! Is he on interiors? Nope, it’s Gil Kane again! Legends only for the debut of The Pro. Not that he deserves it or anything. Same creative team as last issue of Spider-Man except for Chia-Chi Wang on colors and Todd DeZago scripting over Mackie’s plot. DeZago was really invaluable to this team in this moment. Gil Kane’s final work on Spider-Man is THIS dreck. What a travesty. Anyway. Ben is dragging Seward’s comatose body up onto the roof, and across 3 pages, recaps what’s been going on as he swings his old friend to a hospital.

Not only has Kane seen McFarlane’s Spider-Man, he’s seen the corner box art Todd drew for ASM, look at that. The doc finishes that while he’s fine physically, mentally, Seward is a blank slate. Then the cops show and The Scarlet Spider runs for it.

Based on what I’ve seen in the past, I’m assuming Kane’s pencils were super loose for these. They seem to have been super loose even in his prime. So Tom Palmer probably had to fill in a lot of blanks. But I gotta say, this issue is stronger than the last one. Kane’s still got it. He’s just got it in an era when people didn’t want it, my dumb younger self included. So, that’s The Pro. Very exciting. Very long-lasting contribution to the Spider-Mythos. We saw him in the free-for-all of Spider-Man Unlimited 12, and that was his final appearance. Here he is, tho, all the same. Meanwhile, Ben Reilly has gone home, taken a shower, and tried not to fret about his buddy. He’s on his way to work when he sees Carrie from last issue seemingly being accosted by some kinda bubble man.

Even with this magnificent mullet, Peter Parkers are always a hit with the ladies. Meanwhile, Ken Ellis, no one’s favorite Daily Bugle reporter, gets a hot tip about a bunch of mobsters being invited to a party at Club Noir tonight, and grabs Angela Yin to go get the scoop.

Fired already, Ben? I cannot fathom how that 5th panel happened. Computer face threatens Tso not to mess up their gig and also warns him Doc Ock put a hit out on him. Is the computer guy playing both sides against the middle, here? I do not recall in the slightest. Anyway, the Pro is outside, and takes out some goons, so Tso better watch out. As Ben is moping his way out of his former job, Seward appears on a cash register screen trying to communicate from cyberspace (ugh), like we saw in the later TAC 232, but he can’t hold the connection long. Then Ben’s Spider Sense inexplicably warns him of Ken Ellis & Angela Yin arriving at the club. Ellis marches right up to Tso and tells him he’s got a lead on this party, which is incredibly silly, but then the goons the Pro got earlier walk in, guns drawn.

In the ensuing chaos, everyone flees in different directions, but not before Angela IDs Peter Parker as the guy who stopped the hit. The Pro gets into Tos’s office before he does, and forces him to call Doc Ock on his video phone thingie, who says she just wanted to see him die, but of course, The Scarlet Spider comes in through the window.

In typical Ken Ellis fashion, he asks Scarlet for an interview, but as he leaves, SS makes it clear he’d never give an interview to the guy who stuck him with this “stupid, pathetic, lame name.” Really selling that product, boys.

Not the kinda job a superhero would want, but it might be useful as this story comes to a close next issue. But don’t worry, the utterly ridiculous cyber-antics will continue.