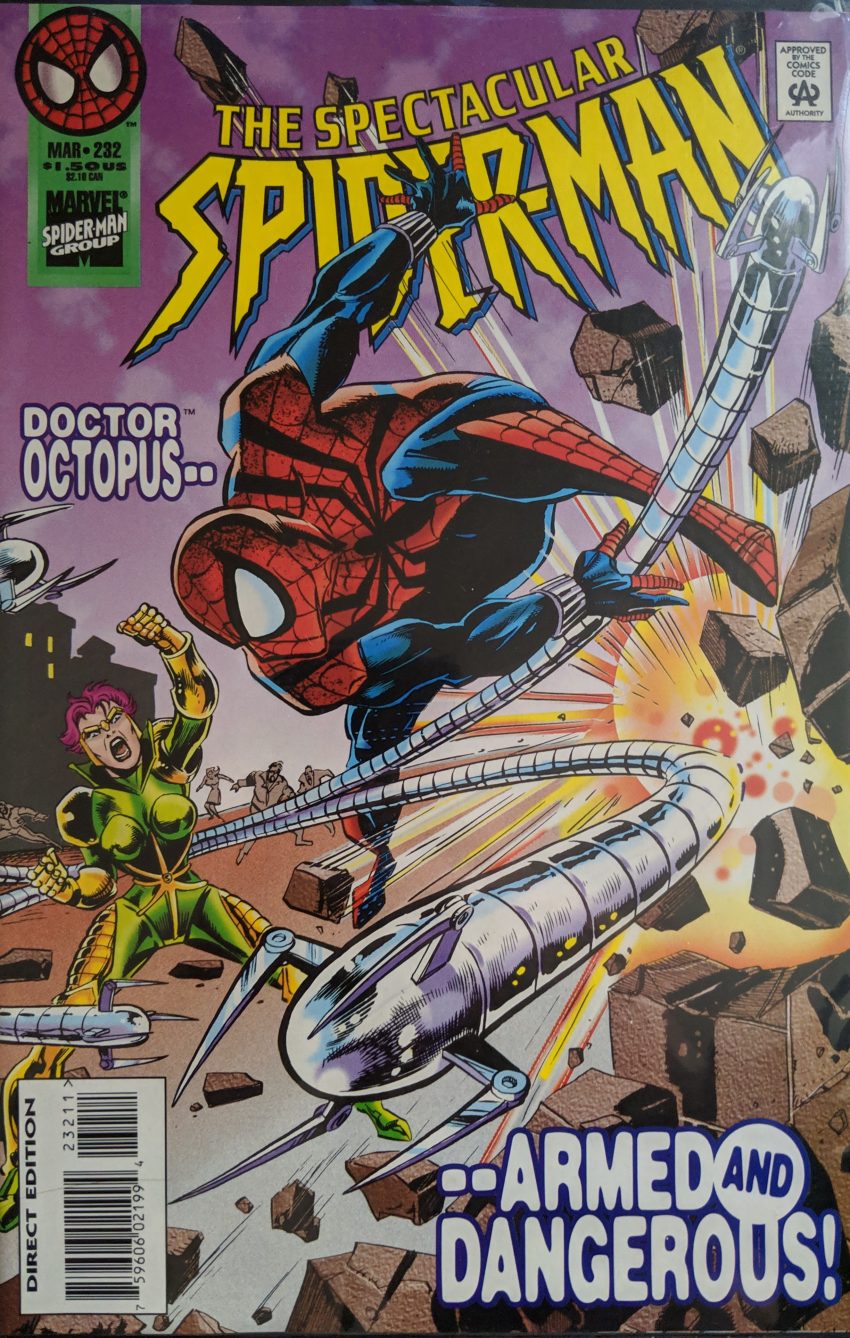 Yeah, so, at this point, Dr. Octopus has been killed and replaced. And it’s dumb and I’m not even going to talk about it if I don’t have to, because we’ll see the books where it happens eventually, and the books where it’s undone, too (Both by the same writer). We get rolling with Ben Reilly receiving some unexpected visitors:

Pretty different relationship from the last block, eh? A lot can change in 2 years (of comics). Peter asks Ben what he knows about the skeleton, and then Ben just hauls it out of the closet. Pete & MJ’s reactions are predictable and understandable.

They’re interrupted by a knock at the door. So, I’ve been doggedly avoiding talking about it largely because I don’t care, but Ben’s only friend from his time on the road is a scientist named Seward Trainer, and as stated, he’s in a coma. The reason is monumentally stupid. And his daughter is the new Doc Ock. It’s… weird. Anyway, they’re interrupted by a knock at the door. Ben says he “got so SKETCHED” when Pete & MJ showed up that he forgot his date with Jessica, talking like a totally real human being, as usual. There’s some Komedy Business about the 3 panicking to put the skeleton back in the bag, and then Ben says Peter has to jump out the window because Jessica can’t see that they look alike.

WOW, Buscema is going AWOL with that hair! Jessica looks like somebody’s middle aged Aunt! But, shout out to MJ for having the only functioning brain in the room. There is more Komedy Business and MJ points out a stray bone on the ground and Ben kicks it under the couch while Peter distracts Jessica talking about photography (Surely she’s heard of Peter Parker). Uuuugh, they’re going to make me talk about this!

FINE. As you can tell from a lot of the Cool Dialogue in this block, these writers were somewhat out of touch in their time. And if there’s one thing comics can be counted on to do, it’s laughable stories about a new technology. Thus, when The Scarlet Spider starred in his own titles for 2 months, one story prominently featured many characters “going into cyberspace,” and Seward Trainer’s consciousness got trapped there, and now he’s trying to get back to his comatose body. UGH, I hate typing every word of that. This scene is becoming ludicrous.

Jessica accepts all this without question, telling Ben to SWING by her place later, so… there’s that. Ben says that was “too trippy,” and then suits up to go help his buddy. The currently powerless Peter has no choice but to let him go alone. Soon enough, he’s there, and he finds Carolyn Trainer taking custody of her dad’s body in a trenchcoat obviously hiding her super suit. She’s not in it for long, though, because it’s fightin’ time.

He really said that. Spidey smashes her through a window to get her outside, but as they fight, her goons keep trying to make off with her dad’s body. Spidey finally manages to defeat her by getting her to put the octopus arms through a car after him and then grabbing them and smashing her into said car.

So Ben goes and changes clothes to make his date with Jessica, who he finds in her dark room working. And when she lets him in…

I didn’t even remember Jessica. Do I remember whether she knows Ben’s secret? Nope! Seems like an important plot point to forget. I remembered Pete & MJ being brought back to the series quickly, but not this quickly. I’m still amazed by what I don’t know about this stuff.

So it’s feeling like Dan Jurgens is writing Spider-Man circa 1975. Pretty straight up. Howard Mackie is writing pretty much the 90s Spider-Man he started with. And DeFalco and Dezago have just gone insane and write him talking like a teenager from 1985 instead of 1995. It’s pretty inconsistent, which is extra weird since the books are so tied together.