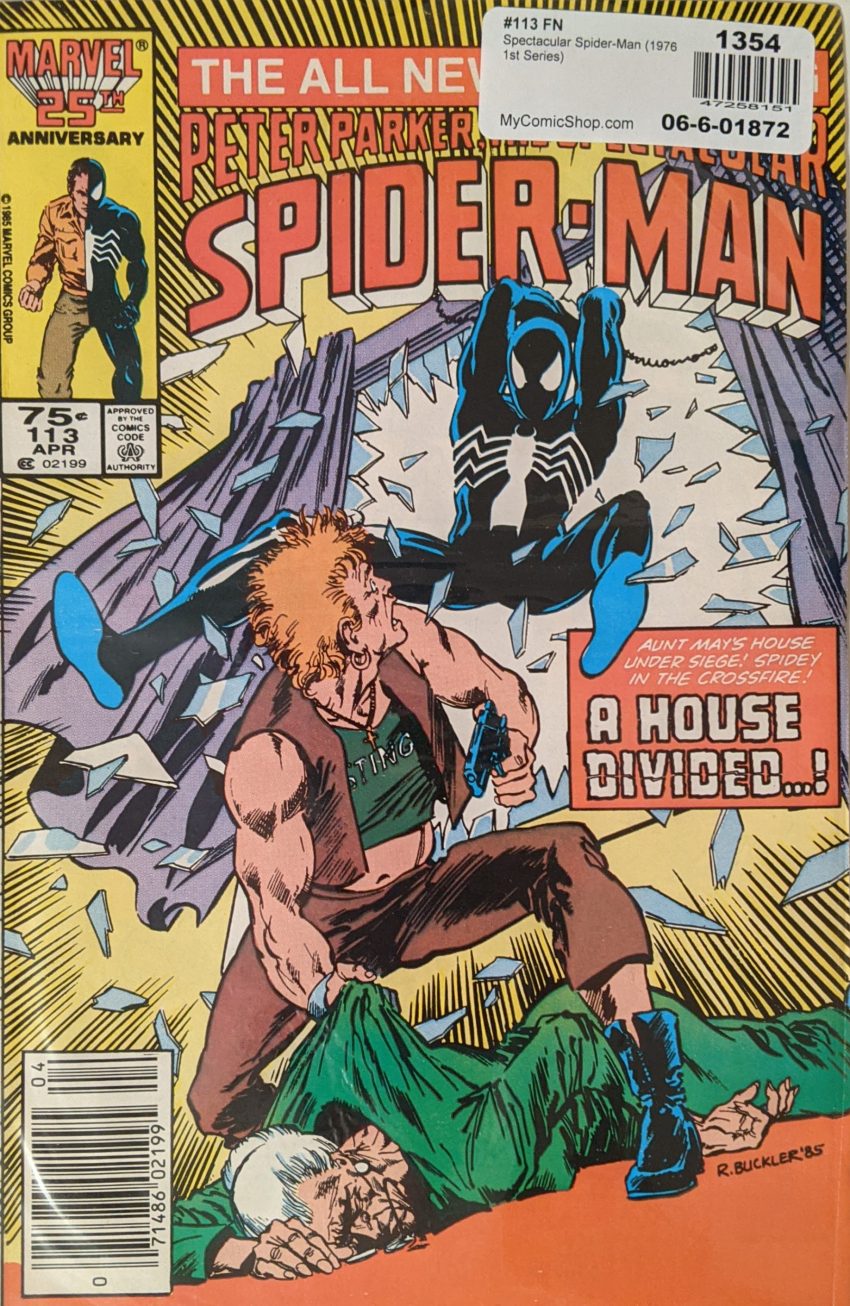 Well, this doesn’t look like a fun one. This month’s art team is Bob McLeod inking himself and Christie Scheele, so it’s gonna look nice, if nothing else. Peter David still writes. And he begins with Ernie Popchik, Aunt May’s boarder who was recently cleared of wrongdoing after shooting those muggers in TAC 110, rushing into the house in a panic.

I somehow always forget we transition to Nathan being mean to Peter all the time in this era til I come back to it. Peter’s actually Spider-Man right now, shaking down a hoodlum for word on The Hobgoblin, and as tends to happen lately, that gets him nowhere and comes off as random and pointless. And when he’s done with that, he checks in at The Bugle, where Joy Mercado and Kate Cushing (Still being called “Kathryn,” but she’ll always be Kate to me) strong arm him into trying to get Joy into Aunt May’s house to interview Ernie. He doesn’t want to do it, but Kate more or less threatens him with unemployment, so off they go.

80s hair for days. Meanwhile, Black Cat attacks some shady businessy dudes and a guy appraising a diamond for them…

I believe this is the first mention of The Foreigner, but it sure won’t be the last. Meanwhile, we cut to yet another scene, as a very unpleasant man works on a “disintegrator ray” until his son tells him the lawyer is here. While the man’s lawyer discusses how to avoid his son’s school alleging child abuse, the son sticks his hand in the zapper. But he doesn’t disintegrate. He does develop a glowing hand, tho. This is a very busy issue. And now it’s back to Queens for…

Uh-oh. Peter & Joy are almost to the house now, but when they arrive, they find it cordoned off by the police.

Nice to see Keating getting a bit of screen time. There is suddenly a gunshot. Peter wants to slip away and become Spider-Man, but MJ begs him not to, saying he’s too involved and he’ll mess up with May’s life on the line. Maybe so. But, as one of the goons is taunting the old folks inside, Aunt May slaps him, and that escalates things.

Spidey sneaks around until he finds one goon taking Mr. Chekov to the bathroom and webs him up and knocks him out. Downstairs, the leader kicks Nathan’s wheelchair over when he won’t stop calling him a hoodlum (These old folks need to stop trying to get shot), and then Ernie starts trying to reason with him. He says he feels bad about shooting them, they they’re victims like he was, and explains his position. But before that can pass or fail, a thump from upstairs makes the leader think the cops have gotten in sond how and get tense again. Upstairs, Spidey webs the mouth of the goon guarding the perpetually arguing Palmeros, allowing Vic to knock the guy out.

The leader, John (They’re all named for The Beatles, you see), is freaking out downstairs when Spider-Man leaps down into the room and webs his gun. Spidey says it’s over, but Nathan says it’ snot, and opens the blinds so a police sniper can see in.

Well, that was crazy, Nathan. My goodness. Ya know, this would’ve been a much nicer way to get him and May split up than his crappy death later. But, you can’t win ‘em all.