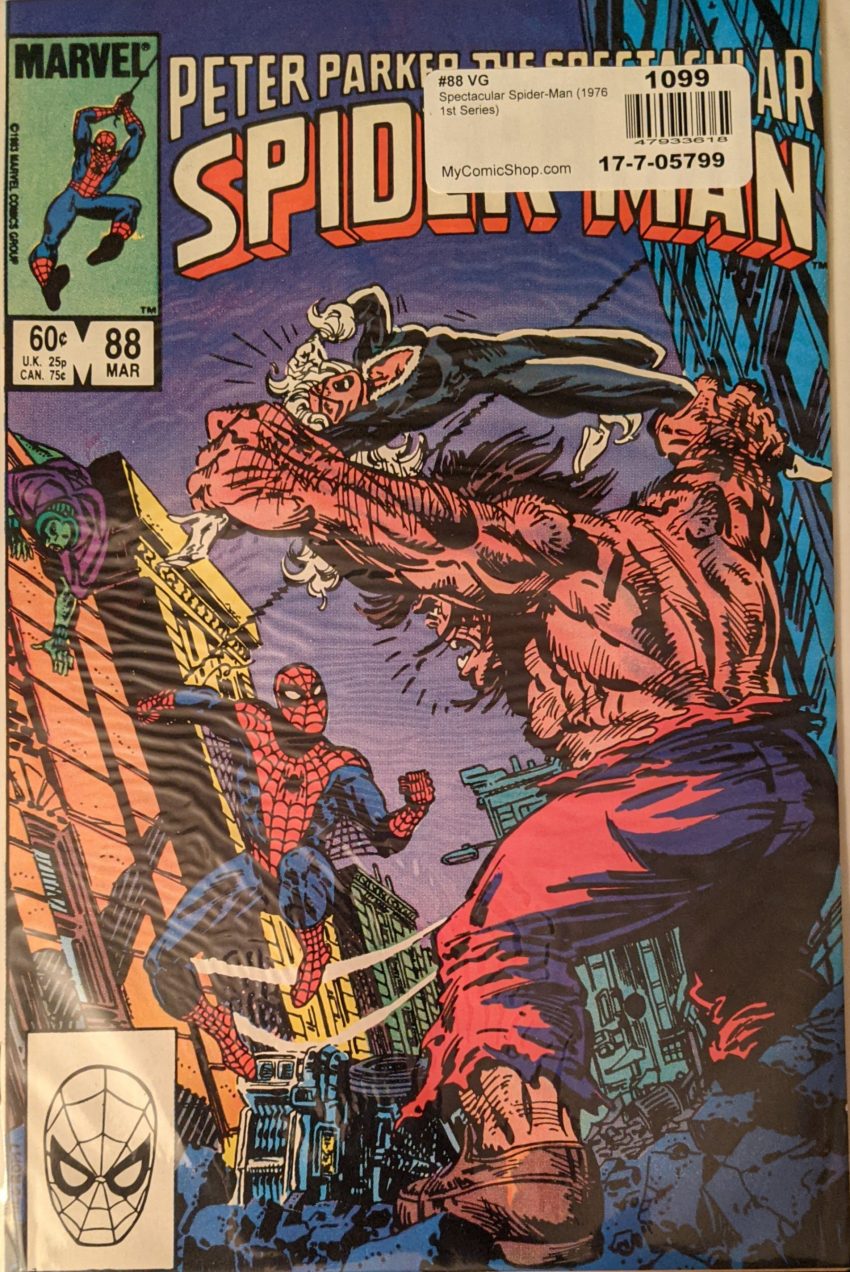 That is certainly a take on Mr. Hyde! I really prefer the sort of crude, choppy inking Milgrom applies to his pencils to the flat, faux-John Romita, Sr. thing Jim Mooney does. It’s Mantlo, Milgrom, Mooney & Sharen again this month. Bob’s really messing up the M-Team! As this one gets cracking, there’s panic in Ryker’s Island, because one of the inmates has broken free and says he’ll only bend his rampage if they hand over The Cobra to him. Cobra is terrified, and the guards more or less are, too.

Hyde’s still mad about their last appearance in ASM 231 & 232. My memory of those events is he got some pretty decent revenge on his old pal Cobra, but I guess it wasn’t enough. The guards try all manner of tactics to subdue Hyde as the warden has Cobra taken to the roof to be airlifted elsewhere.

Cobra slips free and jumps over the wall, his weird squishy body surviving a fall that would kill a regular person into the water. But Hyde’s no regular person, either, so he jumps down after him. While the chase continues, we cut to the home of Felicia Hardy, where she sleeps soundly and where Peter Parker was also sleeping until recently.

How does Felicia pay for this place without a job? With money she got robbing people, one assumes. No problems with that, Peter? “Why do I keep worrying about the fact that my girlfriend doesn’t care who I am?” What a question. But it gets dumber.

The idea that a regular person is just casually keeping up with Spider-Man is pretty silly. This isn’t Batman & Robin. He’s so much faster and more powerful than anyone should be able to hang with. We get the increasingly standard montage of them “giving themselves to the night” or whatever until they hear a scream and investigate. It’s in response to Hyde tearing the city apart chasing after Cobra. Spider-Man quite rightly tells Felicia to stay out of it because it’s too dangerous, and as usual, she says no. Hyde’s literally throwing trucks at Cobra and she’s like “I got this.” Cobra begs Spider-Man to save him like he did last time, and he agrees, telling Cat to guard Cobra as he sets his sights on Hyde. And, just like with Hobgoblin, Spidey starts working on a plan and then…

Spidey leaps between them and tells her to run, and she sort of does, but she thinks this is the last time she’ll be “shunted off to safety.” We’ve already seen the result of that declaration, but now we’re on our way to seeing how she does it. While no one’s looking, Cobra slithers off into a warehouse, thinking he planned his escape route coming through here for a reason. Back at the fight, Spider-Man makes the reasonable argument that while Hyde wastes time trying to kill him and the Cat, Cobra is getting away. When that doesn’t work, he just tries good ol’ web in the face.

Is Felicia Hardy one of the stupidest people ever to appear in Spider-Man comics? Signs point to yes.

Seeing Spider-Man’s unmoving form, Black Cat believes he’s dead, and it’s her fault. Hyde’s intent on making it 2 for 2 when he suddenly finds himself with a back full of darts.

In addition to a prodigious amount of cobra venom, Cobra drops a bunch of smoke bombs on Hyde as he’s tearing the whole corner off the building Cobra clings to. And in the smoke, he doesn’t see Hyde get close until Hyde has a hand around his neck.

Weird pose in the middle panel on the bottom. So now it’s time for Felicia to go make things worse instead of dealing with reality. 12 more issues of this relationship. Unbelievable.