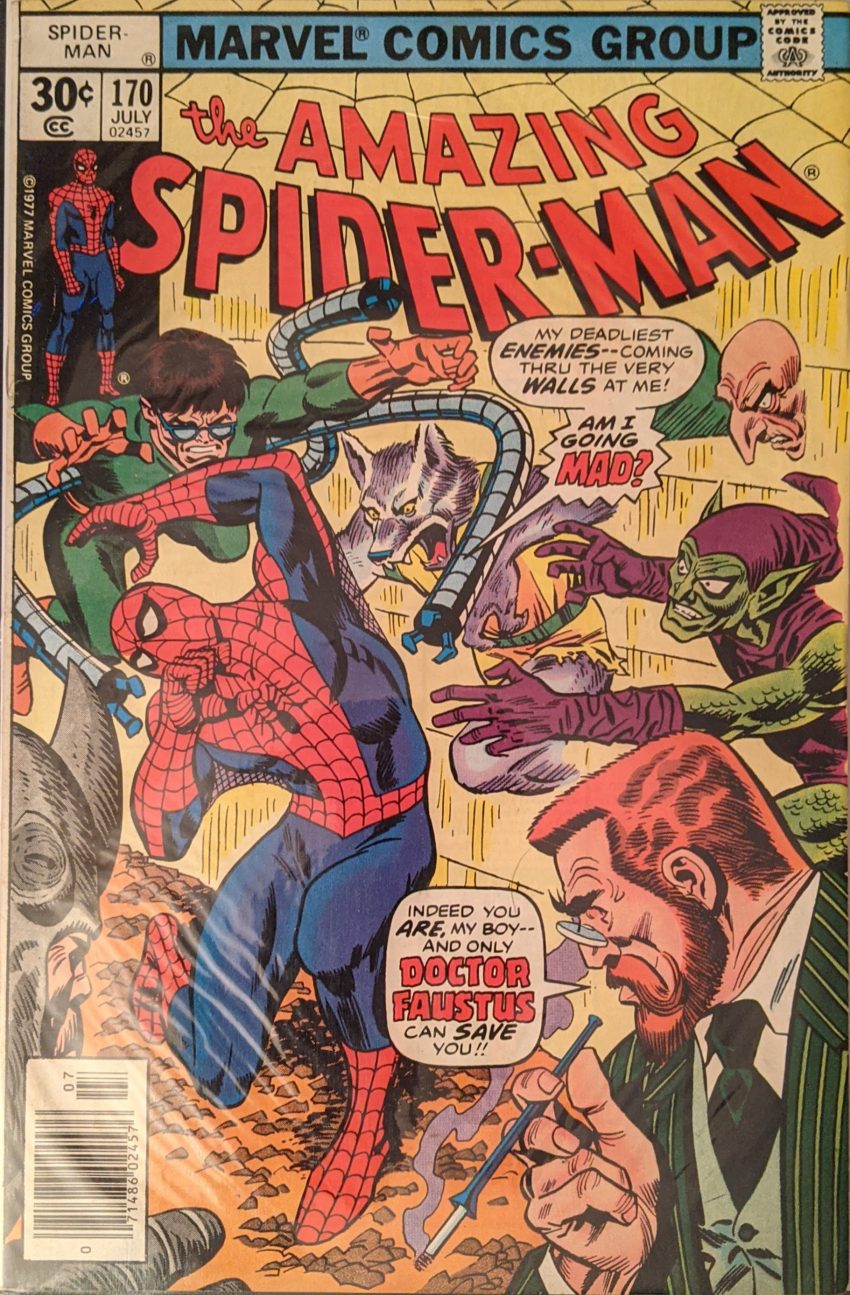 A previous owner rated this one a 6.0 on the backing board. We’ll see about that! (I have no grading experience). That’s sure a Ross Andru cover. A lot of Romite covers or Romita-inked covers that might as well be Romita covers in this run, but that’s definitely Ross. Frank Giacoia helps Mike Esposito with inks this month, and Spidey has just met Dr. Faustus. Spider-Man has heard about his last scheme in Captain America, and that he died, so he has to explain how he didn’t. Kinda miss that in comics. Now characters show up not dead and no one cares to explain it. Anyway, he fell out of a plane, but he had a parachute under his jacket, joke’s on you, Cap.

Faustus’ budget Mysterio bit is working, and Spidey is so disoriented he lets Faustus lead him off to another location. But we cut away to MJ & Liz shopping for Liz’s wedding dress. Liz holds a prospect up in front of MJ, saying she thinks it looks better on her, and MJ wonders what Peter would say if her saw her in it before getting flustered when the shopkeep asks if they need help. Interesting moment. Back at the crime scene, Faustus quietly assures his goons the “narcotic smoke” from his cigarette has Spider-Man under his power (How is Faustus not high, then? And they’ve just casually dosed Spidey with something highly addictive?). He’s right, tho. His goons finish digging the hole with their laser cannon, and Spidey is instructed to lead them into “the enemy’s secret laboratory,” which he’s happy to do.

Good looking page. Great panel variety and storytelling. The strobes make one of the goons trip the “stun-beams,” and it’s all going pear-shaped until Spidey leaps through the corridor and deactivates everything. Soon, they’re in a “hermetically sealed chamber” with “the means to world domination” inside. Sounds bad! But we cut away to…

So that’s the beginning of the long, long simmering plot that won’t pay off til ASM 200 with the burglar coming back. I have to assume Len told his old buddy Marv Wolfman his plans for this when he took over. I wonder if he changed it at all. But what’s Faustus up to?

What now? Antelope Flu??? I can find no record of this in a quick internet search. Ok, man! And how’s he gonna poison the whole of a vaccine supply meant for the entire world with that one tiny vial? We’ll never know, because as he goes on about becoming master of the world, Spidey slowly snaps out of it and steals the vial.

Then Faustus wades into the mix. I did not take him for a physical fighter. He gets in one page of Kingpin-esque action before Spidey gets the upper hand on him.

And that’s that. Not the most bombastic ending, but an ending nonetheless. We’ve already seen the next batch of issues in a previous block, so the next time we check in with this era, we’ll jump ahead to ASM 176 to finish off Len’s run. But for now, our next post jumps to the beginning of the end of Marv Wolfman’s time on the title with ASM 201.