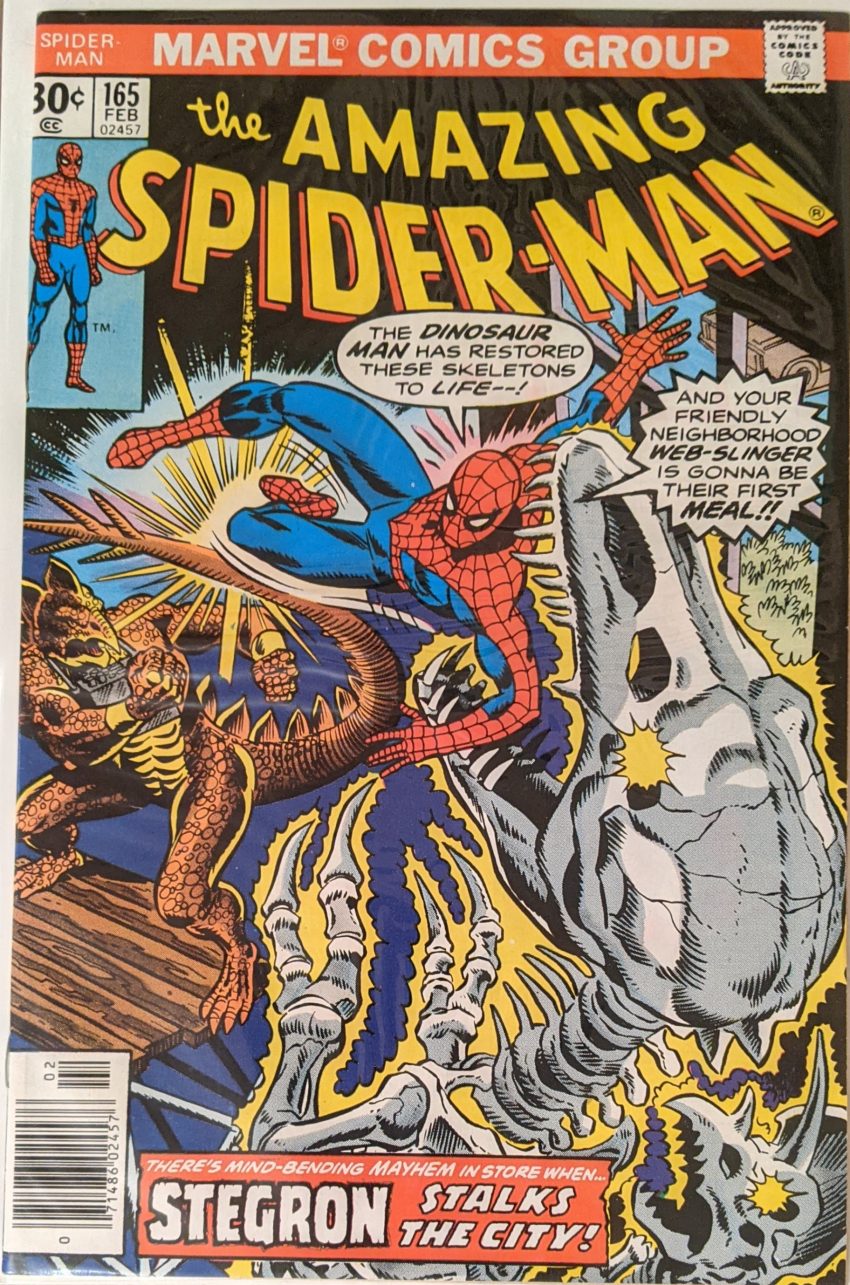 Hey, remember how Len Wein created the extremely silly villain Stegron, The Dinosaur Man in MTU 19 & 20? Well, Len’s got ASM now, so guess who’s back? Still ross Andru & Mike Esposito on the lines. These periods where you can more or less count on the same creative team month in and month out are pretty pleasant. Also, for the moment, Mike Esposito is inking 3 monthly Spider-Man titles, 2 of them drawn by Sal Buscema. Spider-Man really has a look right now. As our story begins, Spider-Man’s Spider Sense has gone off way up in the air, prompting him to smash through a skylight out of nothing but curiosity, we’re told. That’s very selfish! But he find a wrecked room and some unconscious dudes for his troubles, so I guess that worked out.

Spidey quickly discovers he’s stumbled on a secret SHIELD lab when SHIELD guys come in to attack him, assuming he’s with the mysterious person who is obviously Stegron. He’s on the cover, guys, why the secrecy? So, Spidey webs the SHIELD dudes and just leaves. Meanwhile, at the Connors residence, Curt is still having dizzy spells from his recent appearance when Stegron smashes in their front door.

Doesn’t feel like the ONLY thing you can do, but sure, ok. Now we catch back up with Peter Parker, who runs into Flash Thomspon on the street and chews him out for going out with MJ. Flash says he didn’t know they were still a thing, and that he wouldn’t have suggested they go out if he did. Then he heads off to settle things with MJ. Peter beats himself up for acting like a jerk. This is awfully similar to the Flash/Gwen thing in ASM 80. Elsewhere…

All good marriages start with a plot to attack someone in the street.

What a weird place to have a grownup conversation about their relationship. I think this plays well with the retcon of MJ knowing Peter’s secret. She can easily sub in “taking your photos” for being Spider-Man as her reason for not wanting to commit. It’s kind of crazy how often it works. Anyway, we cut to Curt connors trying to comfort his wife when he notices his hand turning green, and then to Stegron at the Museum of Natural History… Using… using the electromagnetic field generated by a goofy gun he has to make dinosaur skeletons come to life. Even for dumb comic book science, that is really bad. Peter makes his excuse and MJ accepts it for a change. Stegron animates more skeletons, telling them soon the world will be their once more… so goofy… as Peter changes into his fightin’ gear.

Spidey watches the skeletons march out the front door and toward Central Park until his Spider Sense warns him of an attack from Stegron, and they get into it. They fight for a page until Spider-Man asks how Stegron survived the end of MTU 20.

Stegron collapses a wall on Spidey and flees while he can. Our man digs himself out, but finds no trace of his scaly foe and has no idea where to even look for him. Also:

And so, the strangely common Spider-Man story trope “The Lizard vs. Some Other Reptile Man” is born. Genuinely bizarre how often they’ve gone back to that particular well. Let’s see how it shakes out next time.