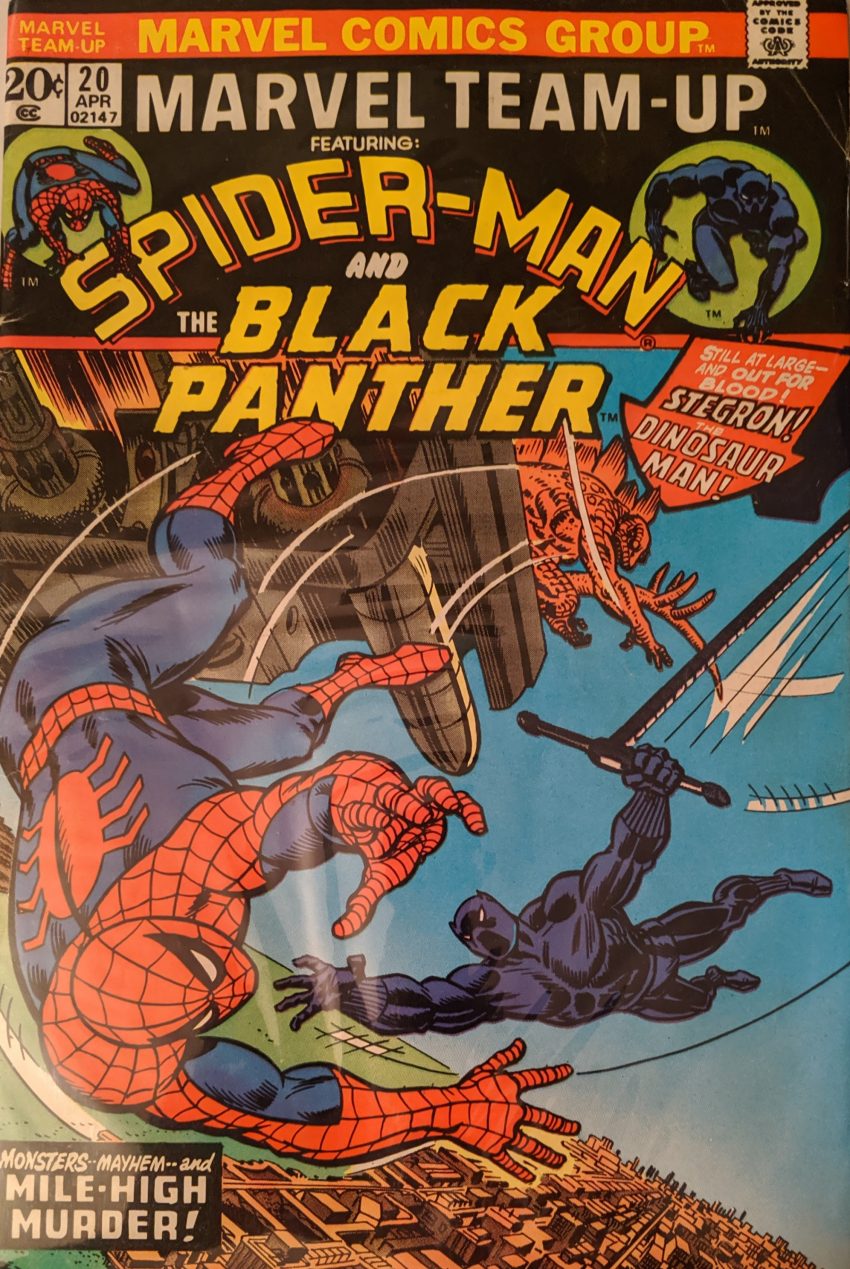 If had to pick my absolute favorite Marvel characters, well, #1 would be obvious. Beyond that, it would be Captain America, Black Panther, Daredevil, Thor. I think they’re all tied for 2nd place. But unlike the rest of those names, you don’t see Black Panther in many comics in olden times, so any appearance is a treat to me. And here he is! I was excited to see Gil Kane’s hyperkinetic art style unleashed on T’Challa, but instead, this one’s Sal Buscema, inked by Frank Giacoia & Mike Esposito. That’s disappointing. Len Wein continues as writer. We pick up exactly where we left off last issue, Spidey hanging off the bottom of an improbable flying space ark full of dinosaurs.He recaps last issue in case you missed it, and then confronts Stegron. Still at large!

Spidey and The Dinosaur Man go at it for a page, but Stegron just keeps on getting that tail past our hero’s Spider-Sense somehow, and he not only knocks Spidey out, but then throws him over the side of the ship to his doom! Falling from a great height is, of course, something Spidey is super good at. As Spidey plummets to his death, as he so often does, we cut to Avengers Mansion, where Jarvis finds The Black Panther is the only Avenger around to do anything about the giant spaceship that’s just popped up on the Mansion’s scanners. T’Challa says he’ll check it out on his way back to Wakanda. Lucky for Spider-Man…

I guess this is officially their first meeting. The story referred to in Jungle Action is the first significant solo story ever told with The Black Panther, wherein writer Don McGregor and artist Billy Graham (Not that Billy Graham) fleshed out Wakanda and established a lot of important characters and concepts that continue to be crucial to the mythos and appeared in the movie. And I gotta tell ya, I have no idea how this can be happening in the margins of that, because my memory of it is a non-stop ride with no room for side stories. At any rate, as the heroes get to work in Connors’ lab, Stegron and his dinosaurs accidentally stop a mugging in Central Park, as he has choise that location to begin his conquest of Earth. As good as any, I guess. Back at the lab, Curt has almost worked out an antidote for Stegron, and T’Challa has helped Spidey create a stronger variant of his web fluid for dealing with dinosaurs (Nice to see T’Challa’s super science background put to use), but then the TV tells them about the dino rampage, so Spidey & T’Challa take off. After a 2nd extremely questionable 2-page spread of dinosaurs in as many issues, they’re on the scene.

T’Challa being able to dodge Stegron’s tail when Spidey couldn’t do it with advance warning is kinda suspect, but also, The Black Panther is awesome, so I’m totally on board. Hey, look, here’s something you don’t see much in Team-Up:

The supporting cast! And if yer reading these things with an eye toward whether or not MJ knows Peter’s secret, I’d say this time it’s 100% certain. Back at the fight, the cops are trying to cordon off the area, while Spidey is webbing up dinosaurs left and right and T’Challa’s beating up Stegron. Things seem to be going pretty good. Spidey thinks to himself that this super strong webbing is unstable, and could “fall apart any minute or clog his webshooters,” by way of explaining why he’ll never use it again after this issue. Then this happens:

MJ has usually been portrayed as remarkably cavalier about super antics, which plays into the idea that she knew Peter’s secret, but even for her, this is pretty ridiculous. “Lemme just wander into the dinosaur rampage for a minute…” Then Doc Connors shows up, and he’s let through due to his SHIELD clearance (Has he ever had SHIELD clearance before or after this story?). He just wanders into the battlefield, too, and tells Stegron there’s no cure for his condition. Stegron responds by tailwhipping him and calling a pterodactyl to ambush the heroes and fly him away. But Spidey isn’t knocked out by the diveboming dinosaur, and webs onto it. Stegron does what he always does and tailwhips, but for some reason, this time, it’s no big deal for Spidey to dodge, and then he punches Stegron off his pterodactyl.

Wh… what? Why…? I don’t even know. Stegron forgetting how to swim when he mutated and/or dinosaurs being bad swimmers is totally absurd. But I guess it ends the book. I’m sure you’ll be shocked to know this isn’t the last we’ll see of Stegron the Dinosaur Man. But it is the last we’ll see of him for awhile. And also: Marvel Value Stamp intact!