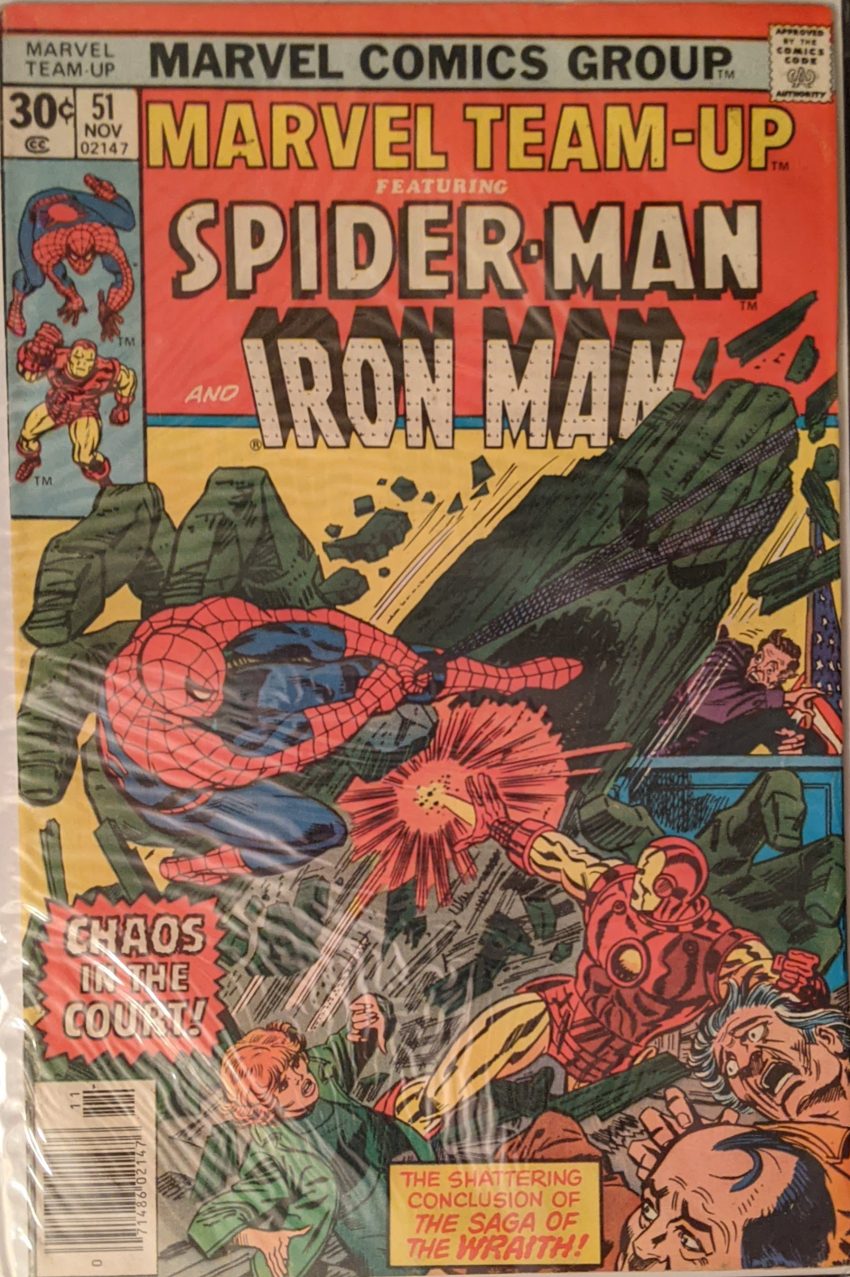 One of the 77. Various reasons have made me take 6 days to read this 4-parter, and it’s begun to feel like it’s dragged on too long. The days where I didn’t read one certainly didn’t help, I can’t really say. Anyway, this looks bad. It’s hard to even see this is meant to be a courtroom at first. If you wanna see the weirdest trial of all time, well, look no further than page one.

Peter Parker & JJJ are on hand to cover the trial, which is turning into a circus before it even starts. Also, Jean DeWolff has called another mysterious favor from Nick Fury to get futuristic computer gear in the room so people can testify from a distance.

Woof, the art on this is clearly a rush job. Never in life has Sal Buscema’s art looked like Herb Trimpe’s… until now.  Peter has had to storm out so Spider-Man can get involved. And a good thing, too, because the elder DeWolff has figured out the “alpha jammer” isn’t affecting his brain’s delta waves, so he can control the technician monitoring and make him turn it off. Ok! Thusly freed, he begins taking control of Brian again, and things get the way things go in comics.

Mantlo has done a “just that lil’ ol _____ me” bit in at least 3 issues in a row here. Spidey flips over and lands on his feet while making a reference to “the newest lady Avenger” so a footnote can say that’s Hellcat. Then Nick Fury appears on one of the screens, and a footnote tells us they met in MTU 13. Also, earlier, a footnote told us one of the lawyers on hand also works for The Defenders. This issue is rife with footnotes, for some reason. Anyway, Spidey is able to web DeWolff’s face, which breaks his hold and lets Iron Man knock him out. But then everyone notices Brian is still standing and moving, which he couldn’t do before. Phillip’s mind now inhabits both bodies, so now he’s The Wraith. As the heroes begin to attack, The Wraith makes the floor into a monster, like on the cover. As the heroes attack it and people in the room react to it, we cut to Fury, watching all this on a screen, unable to see the monster. It’s all a trick. The monster that’s not really there begins to get the upper hand against Spider-Man, while The Wraith’s mental attack against Iron man is so powerful it’s beginning to threaten his bad heart.

Always room for a JJJ bit, even in the middle of all this. Dr. Strange uses the chance to dispell the monster, and Iron Man sucker punches The Wraith, putting him on the floor. Suddenly, Phillip is controlling his own body again, and outraged by the idea that they’ve hurt his son, as if he hasn’t hollowed out his son’s skull and taken up residence. Phillip says once Brian wakes up, they’ll be whole once more, but Strange has decided to try to fix Brian right here and now. But he senses an obstruction in his spine, the bullet from when he was thought dead.

Well, I don’t understand that judge bit even a little. The hulk part is because he’s Mantlo’s next issue of Team-Up, but not THE next issue of Team-Up. For some reason, that will be a Spidey/Cap story by Gerry Conway. Didn’t he JUST quit? I dunno. We’ll see eventually.