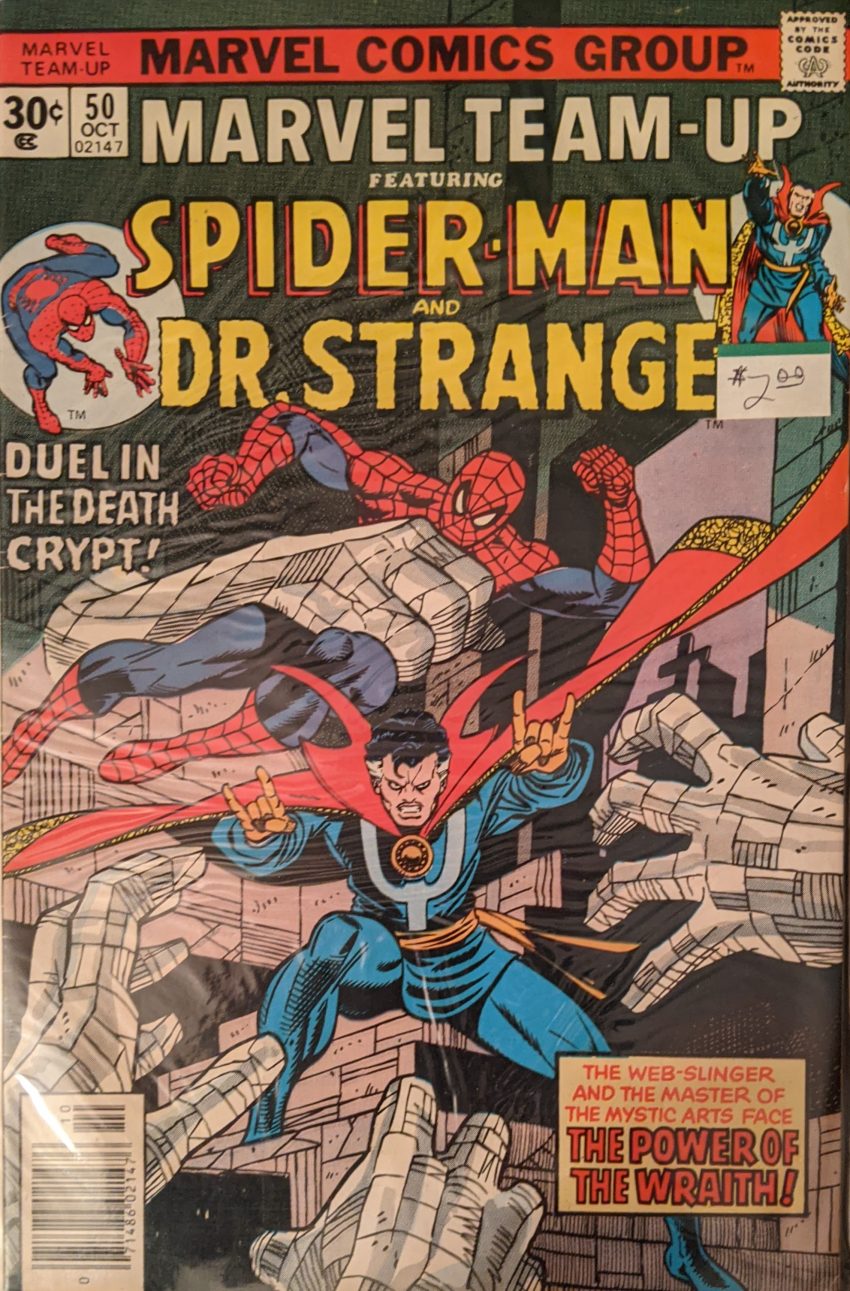 Big issue 50! Weird Gil Kane cover! Doc’s got a strange face. After a trippy splash of Wraith taunting the Spider-Man, Iron Man & Dr. Strange, we get right into it.

Jean says she believes The Wraith to be her own father before managing to recap last issue in just 3 panels. No time to waste this month! Meanwhile, Spider-Man has convinced Dr. Strange to help, and they head out to try to get some answers.

Jean is very fired up. While she does her investigation at the graveyard, Spidey & Strange reach the alleged scene of  Brian DeWolff’s death. Strange finds mystic impressions on the site and is able to sort of replay the events like magic security camera footage. They see Brian shot, and then his assailant shot by his dad, who then picks up Brian’s body and leaves. So now Spider-Man also thinks The Wraith is Jean’s dad. Is he, though?

Oh, gee, who could that be? Jean passes out from shock, which seems quite out of character even in only her 3rd appearance, just as Spider-Man and Strange are approaching the crypt. Soon, The Wraith’s power has them thinking the walls have come alive and are stopping them from proceeding. Then they say it feels like their brain is on fire and pass out. Bad times.

Iron Man has just finished whipping up a helmet he hopes will protect him from The Wraith’s powers, and takes off to join in. Back at the thing, Jean wants to know why here brother seems like a zombie, and dear ol’ dad gives them the supervillain monologue. After getting him away from the scene, Phillip says Brian’s brain was severed from his nervous system, so he called in some friends.

Whenever I have a severe medical emergency in my home, I call a banker and a landlord, too. Standard procedure.Strange succeeds in freeing himself and then Spider-Man in short order and Phillip continues his tale. He used the rich guys’ money to build this ridiculous supervillain base in tunnels connecting the crypt to his house, and was about to perform the vague and unspecified operation that would bring his son back to life with super powers himself (What? How???) when the rich guys turned on him, revealing they were criminals who wanted Brian to serve them. A tussle near the controls made the McGuffin Ray shoot both DeWolffs at once.

Spidey rather reasonably wants to know how blowing up a bank full of people and Stark’s fuel tank serve the cause of justice (No answer is given… why DID he go for Stark if this was all just petty revenge?). Phillip turns Brian’s power on the heroes, but Strange is ready with a mystical barrier this time. Jean, however, is not inside it, and Phillip hits her with the full force of his son’s crazy mind scrambler just as Iron Man arrives.

Mantlo going way out of his way to explain why Spider-Man webbing Brian’s face is saving the day is pretty funny to me. One more issue to go on this story. This has been an unusually good MTU story. Most of the time they feel pretty slight, almost by necessity, but this one has a lot going for it. I look forward to the conclusion.