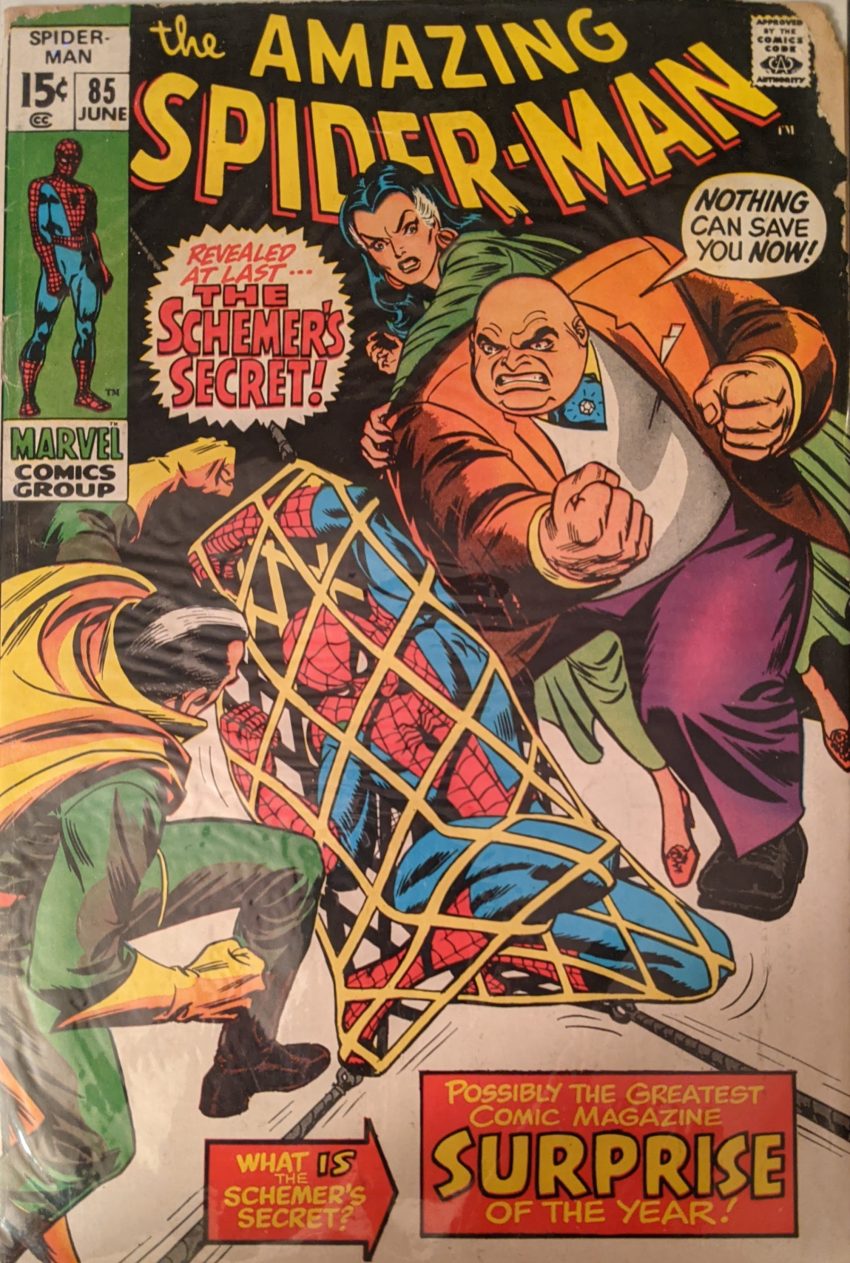 Lofty claims for what seems like a pretty obvious reveal! They do a very special “previously on” kind of splash to make sure you see Vanessa recognizing The Schemer even if you didn’t buy last issue, which also shows Kingpin running off to find her, only for her to reveal she’s still in the house.

Who could he posssssibly beeeee? The Schemer’s car has been damaged in the crash, so he goes looking for parts to steal as we cut to Peter Parker. He’s worrying about having no money for Gwen’s birthday when she and her dad show up at his apartment. They were just passing by, or so they say, and George is eager to ask Peter how he always seems to be in the right place and the right time to get Spider-Man photos.

I feel like Pete has a good alibi here in that he isn’t always in the right place at the right time. A lot of times, especially in recent issues, he forgets or isn’t able to set up his camera before a fight. That there’s a lot of Spidey action Peter doesn’t get should be enough excuse. But instead… we’re doing this….

Is it a coincidence that George looks more amused than afraid in panel 3? Hard to say. Accidentally making Gwen feel better about him seeming flaky around danger is a nice bonus, tho. And look at her standing up for her man. Speaking of how fishy it is that Peter’s always in the right place at the right time, The Kingpin is reading The Daily Bugle and sees photos of their battle from several angles, and even sees Vanessa helping The Schemer slip away through a secret exit. How did his stationary camera do all this? Fisk is furious and confronts her about it, showing her the photographic evidence that there’s something between her and his mysterious rival. She swears she hasn’t betrayed his trust, but also can’t say why she helped Schemy. Kingpin is not happy. Meanwhile, Spidey finds the Schemer’s wrecked car, with him nowhere in sight. He tinkers with some of the controls and ends up blowing up the whole car, and almost himself with it. He finds his quarry in a nearby auto garage.

Schemer produces “a stun nozzle” from another part of his cape, and when that isn’t enough, he chucks a smoke bomb at Spidey, evening up the odds a bit. Meanwhile, George & Gwen return to Peter’s apartment over George’s protests, Gwen desperate to check on Peter. But, of course, he’s not there. Gwen is very worried, but George wonders if Peter left with Spider-Man willingly. Back at the fight, Spidey webs the smoke bomb and starts spinning it like Thor’s hammer to dissipate some of the smoke, helping him spy his foe running away. He webs Schemer’s feet, accidentally making him fall out a window. He doesn’t wanna kill anybody, so…

Oops! With Sidey trapped in a “magnetized” steel net that contracts around him, Kingpin gets Schemer by the throat and demands to know his connection to Vanessa. He says it began with a special young man at a school in Switzerland…

The fact that they haven’t given Kingpin a normal name yet is getting weirder all the time, especially in that newspaper headline. And, yeah, obviously, The Schemer is Kingpin & Vanessa’s son, Richard, in a Scooby Doo mask. He’s used Fisk’s own money to create an organization capable of taking him down. He feels like a reckoning had to come for his living the high life from mob money all those years. One wonders how that squares with him starting his own mob, but whatever, he unmasks for his dad.

I must’ve seen how Kingpin snapped out of this by now, but I don’t remember. Huh, looking it up, I guess I haven’t… but will very soon. His next appearance was 2 issues of Captain America, random as that is, but he returns to ASM in our next Len Wein block. And speaking of blocks, this brings to the end of this, one, and back to where we started. I started at #86 years ago because it was the earliest place from which I could do a largely unbroken run of issues. But a lot’s changed since then, so we will be going back to the very beginning in a future block, and we’ll run it from the beginning to ASM 40. But for now, time to jump ahead to the final days of Gerry Conway & Ross Andru’s run together.