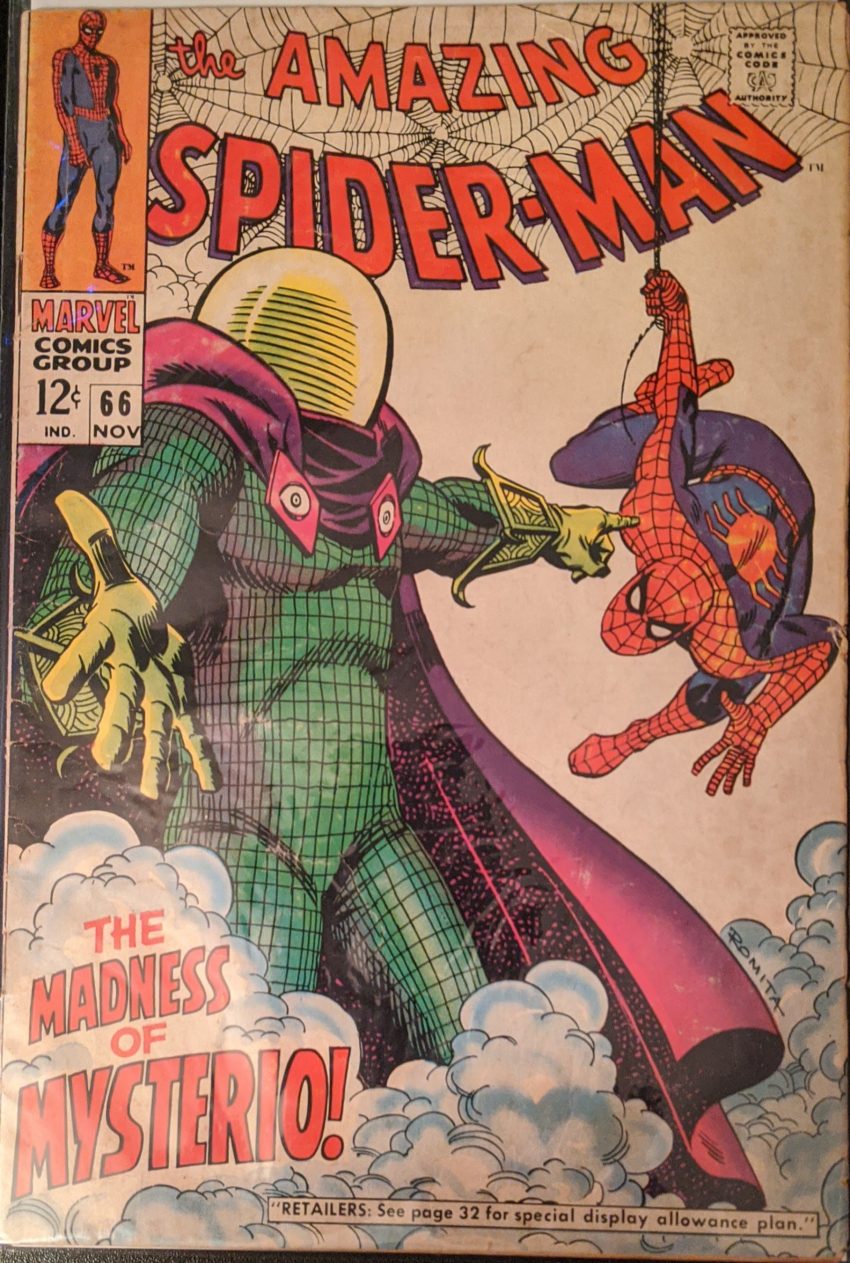 Retailers! Pretty wild to put that on the cover. On the splash this month, Mysterio towers over an amusement park, telling us after all these months, he’s ready to have his revenge on Spider-Man. Also, Don Heck & Mike Esposito share the same credit of “abetting.”

Oooo, psychedelics. He continues to say that he allowed Spider-Man to think he was defeated “just one year ago” back in ASM Annual 4 so he would lower his guard. That’s hilarious, but ok. Then he got himself assigned to work in the prison pharmacy, where he gathered the chemicals he needed to effect a Mysterio-style prison break. Again, sounds suspect, but ok. He says the first step in his plan will be committing a crime big enough to attract Spidey’s attention, and then we go see what he’s up to. He’s returned to The Daily Bugle to get his clothes and camera after the battle last issue, recapping all the way as he heads home and goes to bed.

Mysterio indeed! So ends the saga of Peter Parker’s motorcycle. It seemed very odd for him to have one in the first place, living in a city with ample public transport and knowing he’d have to ditch it a lot as Spider-Man. Mysterio vanishes, and the owner of the shop he was in tells a cop he tried to give Mysterio all his money, but Mysterio just threw it away. Peter begins to slip away to become Spider-Man, but because he’s in a bad mood, he decides there’s nothing in it for him and to let the cops handle this for once.

Nice moment for Peter & Gwen. Robbie is still relatively new to these pages, having been around only about a year and not getting much screen time, so this lunch with George is good. They talk about how they both believe Spider-Man is misunderstood, and Robbie mentions he wishes he could get JJJ to see it right. As they finish up, both men say they feel as if they know Spider-Man somehow. This is a pretty good plot thread, but I don’t think it goes anywhere, really. Most writers seem pretty sure Robbie knows Peter’s secret, but he never acts on it (And some don’t think he does). However long George knew, he didn’t confide in Peter about it until he died. Could been interesting. Elsewhere, Peter catches the subway home, only to find Harry on the street, worried sick about his still missing dad.

Well, that can’t be good. It also doesn’t quite line up with Norman’s next appearance, but… that’s comics. Aunt May is freaking out because Mysterio has taken over every TV channel to show footage of various cataclysms striking New York, saying these things will happen unless Spider-Man meets him at the site of their first battle. Anna Watson comes back from the grocery store just then, so Peter leaves his almost hysterical Aunt in her care, thinking the best thing he can do for her is get rid of Mysterio.

Spider-Man attacks immediately, but Mysterio vanishes into his smoke. He starts hitting Spidey from all sides, basically invisible, but our man just bides his time, waiting for an opening. Spidey leaps up onto the ceiling, out of the smoke, and Mysterio reveals himself, as well as his little amusement park, saying it will be Spider-Man’s final resting place. Spidey notices the gun-like machine next to it, but lunges for Mysterio, anyway.

Goodness, I’m sure Spider-Man is really 6” tall and it’s not an illusion. I really am. We’ll find out next time. This issue includes a letter from Tony Isabella, still a kid, I assume. We only just saw several stories by him on the blog. That’s always fun.