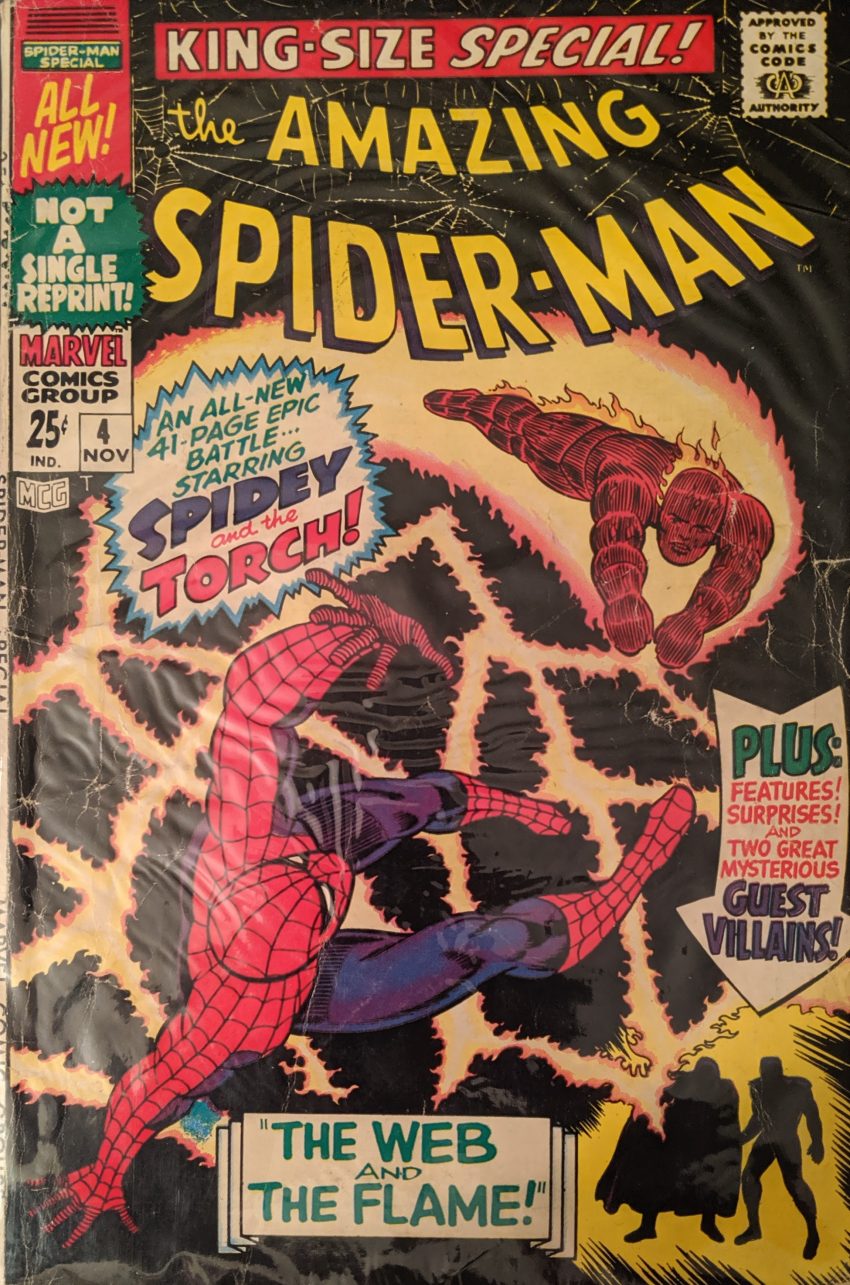 A 41-page battle epic! What could bring Marvel’s best frenemies to a 41-page battle epic? We shall see. This one kicks off kinda wacky, telling you Stan Lee scripted it and Mike Esposito inked it, but daring you to guess who drew it. They’ll reveal it at the end. Uh, why? I dunno. But we’re off! After a customary splash page where Spider-Man hears a commotion and decides to investigate, there’s a very rare for its time 2-page spread of The Human Torch terrorizing a city block while burning through an armored car! Has Johnny Storm gone bad? Spidey decides it’s up to him to find out, and the two pals start mixing it up. Spidey snares Johnny in his “asbestos webbing” (Johnny is so gonna get cancer), but not for long.

Uh… ok. Nothing says safe and sound like a… fire net. When he hits the floor, Spidey tears up a fire hydrant, shooting a jet of water up to extinguish his friend and/or foe. Then he… repairs the hydrant with “web foam?” Anything can do anything now, I guess. But temporarily losing his flame doesn’t deter Johnny at all. But…

That seems… strained. Like JJJ talking to himself down there, tho. The next day, a mystery man sees the Bugle’s headline, and says it gives him an idea that will be dangerous for Spider-Man & The Torch. Then we cut to Peter Parker hearing a news report that a Paragon Studios, inspired by the photos from yesterday, wants to make a Spider-Man vs. Human Torch movie. It says Johnny’s already in, so they’re searching for Spider-Man. Peter just drops everything and starts packing, thinking of what he could do with some real money, and also how he’s never heard of Paragon Studios. Then he just flies to Hollywood. Mr. Hard Luck, Mr. Broke All The Time And Can’t Afford Aunt May’s Medicine just hops on a plane! On the flight, he thinks this better pay off, because he spent all his savings on the plane ticket. That seems like a bad idea! Spidey checks in at the movie studio, and is told to come back tomorrow at 9am. Then two mystery men cackle about how they’re going to destroy Spidey & The Torch.

Good banter. The two heroes decide to quit harassing each other and play nice for the duration of the shoot, then head to the studio. The movie apparently features aliens landing in Central Park. But as everyone gets in position and the cameras start rolling, our hero’s Spider Sense goes off. They shoot a scene in which Spider-Man wants to try to reason with the aliens, but The Torch attacks before he can, and then cut. Spidey’s still got a danger buzz as they try a 2nd take, and this time, The Torch comes blasting at him instead of the aliens and silently tries to burn him up.

The Torch just keeps on flying, and Spidey chases after. He loses him, and goes to his dressing room looking for him, while The Torch seemingly watches from afar and says the plan is going perfectly.

Ugh. Of course it’s Mysterio. And the guy impersonating The Torch is The Wizard, using an asbestos suit and his flying discs. The two goofballs flashback to how they hooked up. Mysterio was the guy reading the paper earlier, and he decided to just “set up an actual studio” as part of his plan. He sure did that quick. As for The Wizard, he… put an ad in the paper asking Mysterio to come see him? This issue is insane! So he did, and they decided to kill their enemies with the movie angle. Highly convoluted! Back in the present, Spidey’s trying to beat up Johnny, who of course has no idea why, so it’s time for more of that 41-page battle epic.

Everything in the world is asbestos! That only holds Johnny for a second, but as the two heroes keep it up, The Wizard gets impatient and, over Mysterio’s protests, shoots some kind of ray at them. The heroes are soon on the trail of their mysterious attackers together, but a giant ring spraying gas drops down around them. No expense was spared on this trap.

Spidey’s danger sense leads him to a room on the wall the villains are watching from, which The Torch immediately bathes in flame, forcing them to run for it. Mysterio fools the heroes with some illusions long enough for the villains to reach the roof and a totally ridiculous flying machine, but the heroes are right behind them. But as the heroes give chase, a thunderous sound draws their attention…

At least they didn’t assume it was a real giant gorilla. After all, it looks so real. Spidey sure would under other writers. The entire gorilla is fireproof, of course, allowing it to slap the crap out of an unsuspecting Torch. It picks him up and begins to crush the life out of him, but Spidey’s on the case, tearing open a panel on the back and destroying parts until the gorilla stops. It’s still got Johnny in a tight grip, so Spidey has to use his prodigious strength to free him.

Now that Spidey has Chekov’s Magnetically-Activated Fluid, the heroes fly into the next trap. In this case, they get trapped between two big glass barriers in a cave, which then somehow starts shooting huge boulders at them.

That fluid sure came in handy! Spidey’s quick action there causes all the boulders to start flying toward the villains instead, because REASONS, and soon their barrier and their controls are smashed.

And that’s our show. Rrrrrather inessential, I must say. The rest of the issue is various features on stuff in the series, like a 2-page spread of The Coffee Bean where the gang hangs out, an explanation of all Spider-Man’s gear & powers, a gallery of villains, and a good look at Pete & Harry’s apartment. And on that final feature, they finally admit who the penciler is: It’s Stan Lee’s brother, Larry Leiber. While maybe less known to casual fans, Larry was kind of a jack of all trades in the early bullpen, scripting the few books Stan didn’t like Iron Man, Thor & Ant-Man, drawing others, or working in production in the Marvel offices. His long career in comics also includes drawing the Spider-Man newspaper strip for a really long time. One of the unsung heroes of Marvel Comics. This will not be his last appearance on the blog. But was it his first? I don’t even remember.