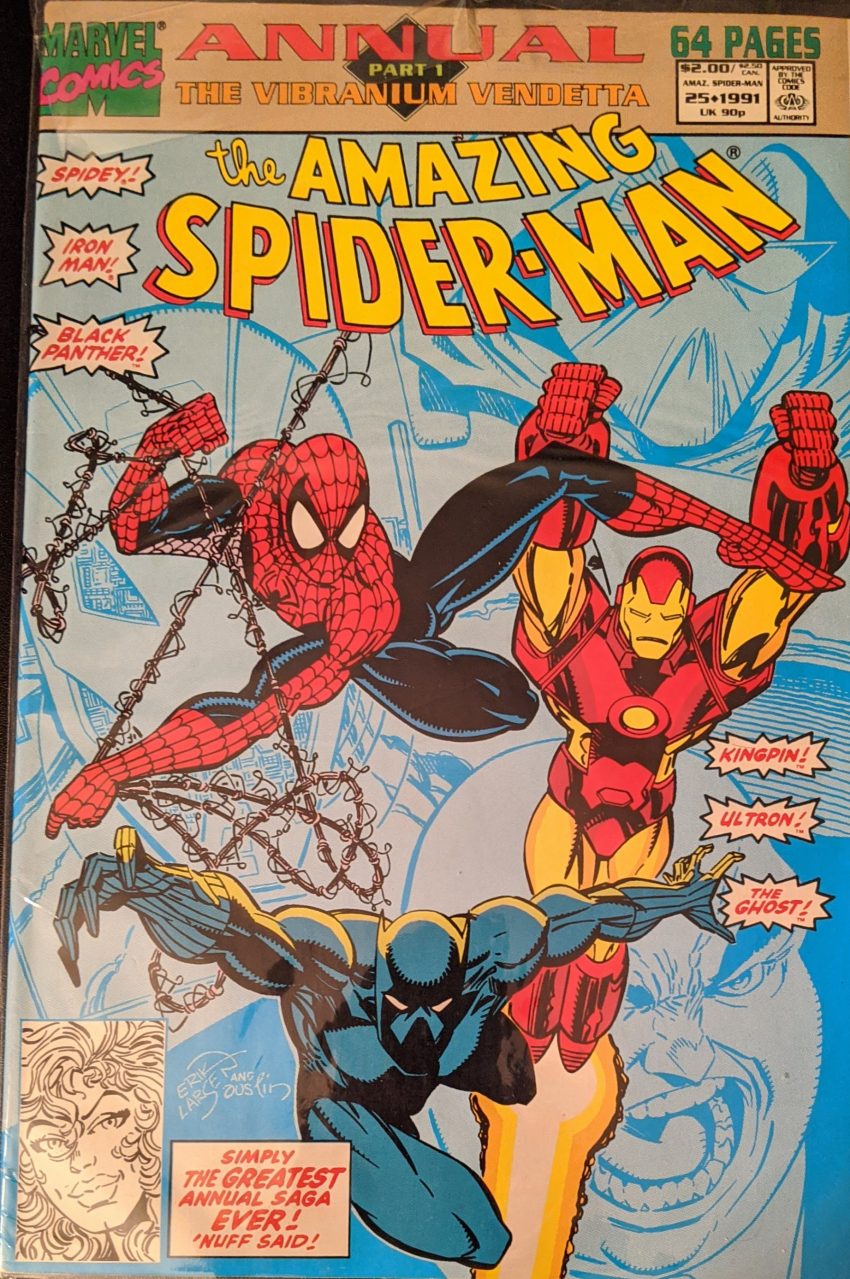 Here we go with a 3-part saga running through this year’s Spider-Man Annuals. I think this was my first exposure to several Marvel characters and concepts, most notably Black Panther. Little did I know he would go on to be one of my all-time favorite characters. As for the boast at the bottom, the greatest annual saga ever is X-Men’s Days of Future Present by default due to it being drawn by Arthur Adams. Sorry, other annual sagas. But let’s get into The Vibranium Vendetta, Part 1: The Spider & The Ghost by David Michelinie, Guang Yap, Jeff Albrecht & Bob Sharen, which opens with Spider-Man stopping some guys from loading stuff into a van on the campus of ESU late at night.

The facing page to this one is an ad for the Marvel Universe Series 2 trading cards. I collected an almost complete set of those at great personal cost due to cards drawn by John Romitas, Sr.& Jr., Jim Lee, Erik Larsen, Mark Bagley, and of course, Art Adams, among others. I wonder where those wound up.

This is so funny to me. I found this art VERY disappointing as a child. They’re drawing Spider-Man wrong! Why isn’t everything covered in a zillion crosshatch lines? No, thank you! Today, I appreciate the clean lines and classic Spider-Man so much. What a difference 30-odd years makes. Anyway, Roxxon being involved can’t be good news. MJ is still up and ready to celebrate because, she says, Peter told her her loved her for the millionth time this morning (She counted). They settle in for a romantic evening while we check in with some of the villains of the piece.

Ghost disappears through the floor, and Kingpin thinks he’ll have to get rid of him once he’s successful. Marvel movie fans may be surprised to see Ghost is a man in the comics, but that’s superhero movies for ya. The next day, Peter Parker is at ESU, on his way to a big kick off thingie for the Roxxon project when a heretofore unseen classmate named Chip pulls him aside to ask for help moving some equipment, and to offload some exposition about how his team is working on agricultural experiments to speed up plant growth. What random info to devote a whole page to, I’m sure it won’t come up again later.

T’Challa and MJ is a pairing you don’t expect to see too often.

This would be my first time hearing about Vibranium, and Wakanda’s monopoly on it. In Iron Man, John Byrne is currently writing (And a 10-issue return to his first monthly gig by John Romita, Jr. has just ended), and Tony’s got some kinda crazy problem with his nervous system. This is an unusually bulky take on it, but this is one of my favorite Iron Man armors. It made the suit actually seem like armor instead of the shiny spandex it had always looked like in the past. Iron Man speaks to Arthur Dearborn, who he has quite a history with, before one Jonas Hale, an executive VP at Roxxon, takes the stage and demos their synthetic vibranium by having a guard shoot at him, and the bullet bounce harmlessly off a thin foil of it. But then he gets called away to a situation in their lab, and Dearborn goes with him.

That’s Roxxon for you. And why that chair was melted earlier. Later, Ultron-13 is being transported to The Vault after being beaten by The West Coast Avengers when he’s had enough and breaks loose. He’s looking for a way to become more powerful, and a newspaper one of his guards had telling him about the synthetic vibranium seems like a good prospect. I really miss Ultron putting the numbers in his name as he switched from body to body. Later that night, Spider-Man is headed back to campus, because he doesn’t trust Roxxon, and he’s not the only one.

They’re quickly provided an excuse as The Ghost appears and begins planting bombs on the equipment. So they bust in and Spidey covers Ghost in webbing, which he just walks out of before unleashing a barrage of blasts at Spidey. But while he’s doing that, he fails to notice Black Panther sneaking up behind him to deliver a flying kick. Ghost turns invisible, and the heroes use the time to gather up Ghost’s bombs and covering them in Spidey’s web so they explode harmlessly.

The darkness doesn’t do much to deter Spider-Man, with his danger sense, or T’Challa with his enhanced senses, but as they move in for the finish, Dearborn turns on the light, messing up their plan. Ghost escapes them, and uses his power to reprogram machines with a touch.

As Sunturion, Arthur tussled with Iron Man way back in the late 70s. I’m not sure he did much between then and now, and this was my first time seeing him, regardless. We’ll see how that goes next post. Next comes a 3-page retelling of Spider-Man’s origin by Michelinie & Buscema, in case you forgot it, and then the beginning of an Outlaws story that will run through the Annuals. This is by Michelinie, Alan Kupperbuerg & Ed Laellari. My opinion on this art has not changed much since 1991. It looks pretty tossed off. It begins with Silver Sable doing some combat training before being delivered a big job for her company, and saying it will require special operatives. Which leads to Rocket Racer on his way to ESU. He stops some drug dealers, and then…

Nope, The Prowler is off testing modifications to his gauntlets and saving a kid playing in a dangerous construction site in the process. When he gets home, Silver is waiting. Mindy is not into this at all, but Hobie says they need the money, so he’s in.

Say it ain’t so, Sandy! More on that next time. Next up: A Venom story by Michelinie, Paris Cullins, Bud La Roas & Kevin Tinsley. This is a flashback story taking place while Eddie was catching a ride back to New York with that unsuspecting family between ASM 315 & 316. They stop in for food at a truckstop, and that’s too bad, because it is being robbed.

Eddie wants to get involved, but doesn’t want anyone to find him before he can go kill Spider-Man, so he plays it cool. Until one of the goons threatens the couple’s baby and then shoot the dad in the shoulder, and Eddie invites them to take it outside. The goons think it will be funny and take him up on it.

Venom brutally takes out the goons by throwing them into trucks, throwing trucks at them, and blowing up trucks. Various truck-related violence.

Alright. Finally, it’s a Chance short by Michelinie, Steve Ditko & Bob Sharen. Yeah, that Steve Ditko. Despite his insistence that he not work on his famous Marvel creations, they just keep booking him for back-up stories in Spider-Man comics. Seems kinda rude. In it, Chance is doing his thing at home when he’s visited by Raymond Trask and some goons. He’s figured out who the guy in the Chance suit is since Chance tried to kill him in ASM 336, and wants to hire him, as some one else has now put a hit on Trask. Chance thinks it’s funny to recoup the money he lost failing to kill Trask by keeping Trask alive and accepts.

Chance continues fighting a boat until he tricks it into shooting itself, and it explodes.

Wouldn’t be a Ditko comic without people making weird, weird faces. And we’re finally out. Whew. These annuals are too much. And there’s 2 more where this came from.