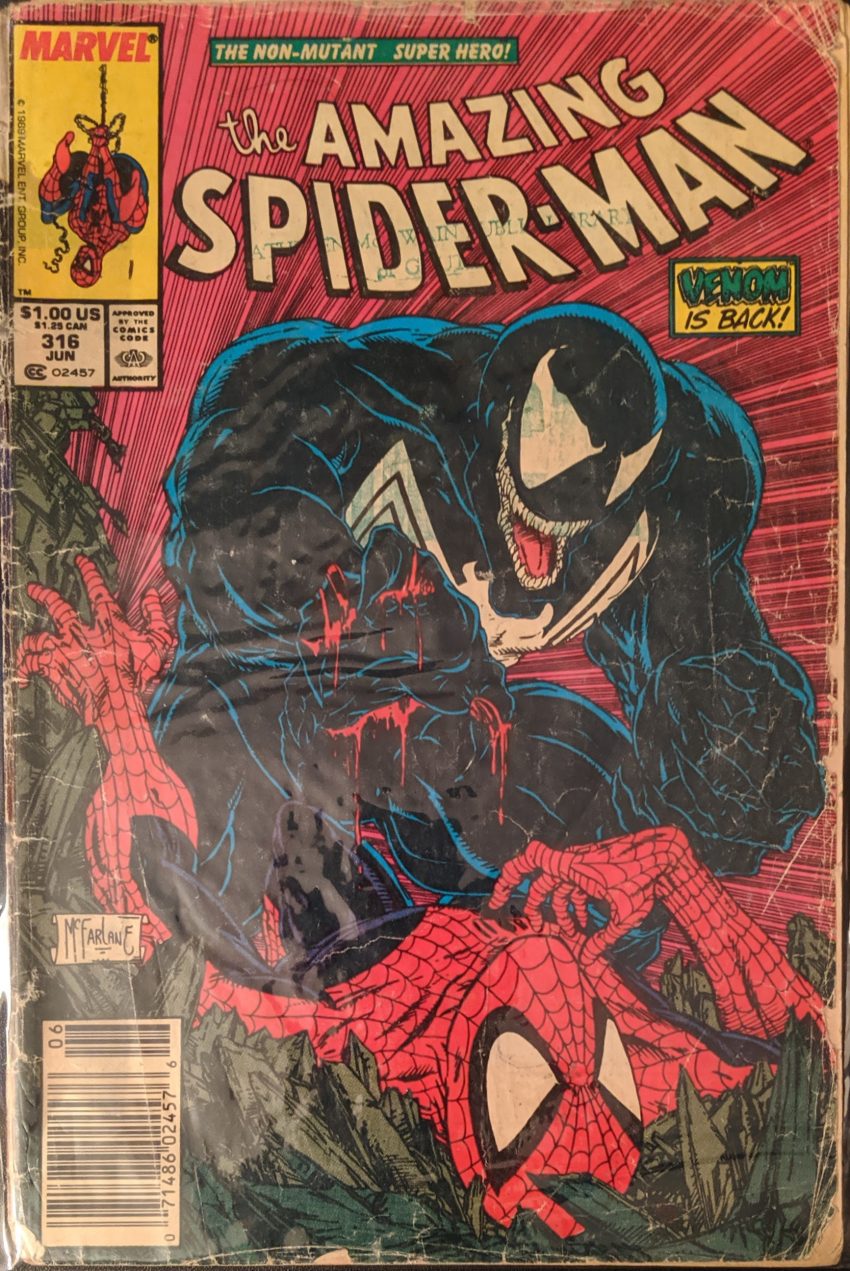 Another comic bought from the library. A shame about this one, I guess. Due to the stupid particulars of comic collecting, because of the cover, the 3rd appearance of Venom is one of the most expensive, far more than the 2nd. Collectors never open the book, anyway, so the cover is all that matters. Ugh. Vultures. Anyway, comics! Man, 315 & 316 both have thick 30-year old tape holding the covers on. I wonder if they did that to all their comics or these 2 just got their covers ripped off. I guess I’ll find out, I think I got a few more of these. Look, Venom is jumping a homeless dude in the sewer:

I thought that top left panel was pretty creepy as a kid. Now that McFarlane is much more in control of his line, Venom is a lot cooler looking than in his initial appearance. And the teeth have already gotten pointy. McFarlane won’t add the stupid tongue and drool, though. That comes after him. I always wondered how he felt about that. Up in the regular world, Spider-Man is trying to photograph the cops catching a purse snatcher without getting involved, since JJJ/The Chameleon won’t buy his Spider-Man shots anymore, but when the guy runs into a junkyard and brandishes a weapon, he’s forced to intervene.

I tried my best to reproduce that bottom right panel as a kid. Didn’t look too good, as I recall, but then, I was 10. Also wanted to point out that now that McFarlane has it together, look how thin the webs are. People in his wake will draw them huge and chunky, way too big to have come out of the little nozzle on his wrist, but if they were doing a better job of copying, they would not. Anyway, changing to Peter, our hero drops by The Bugle to try to sell his photos, and to pick up some change of address forms Glory Grant copied for him. Glory says she has to go because her lunch date is here. Pete calls home to find MJ has had another modeling gig cancel on her at the last minute, so she’s going to go apartment hunting.

Well, that was gratuitous! Goodness. I guess they really wanted to sell what a bad dude Venom is. And, again I say, every attempt to humanize him and make him heroic lands totally flat after growing up with these comics. This was also my introduction to The Black Cat. Not her finest hour. As Venom swings away from Peter & MJ’s former home, MJ is on the street talking to the doorman, and she sees him. He scared her to death last time, and strong as MJ is, everyone has limits. Thus, Peter comes home and finds her really upset, and she explains why. Then something rather novel happens: Peter calls the government. He wants to know why no one has been reporting that Venom is on the loose. He tells them he’s Spider-Man, not that they believe him, and that Venom has sworn to kill him. They tell him to file a formal complaint. With that avenue closed, he decides to go out looking for Venom. But after a few pages of really egregious posing that probably sold for 5, 6 figures, Venom finds him. In a meat packing plant, for some reason.

Venom chases Spidey through the facility, Spidey trying and failing to set traps for him.

That’s not good! In the 80s, Marvel comics painted blood pink after a certain amount to get around Comics Code restrictions. It was a little confusing to me as a kid.