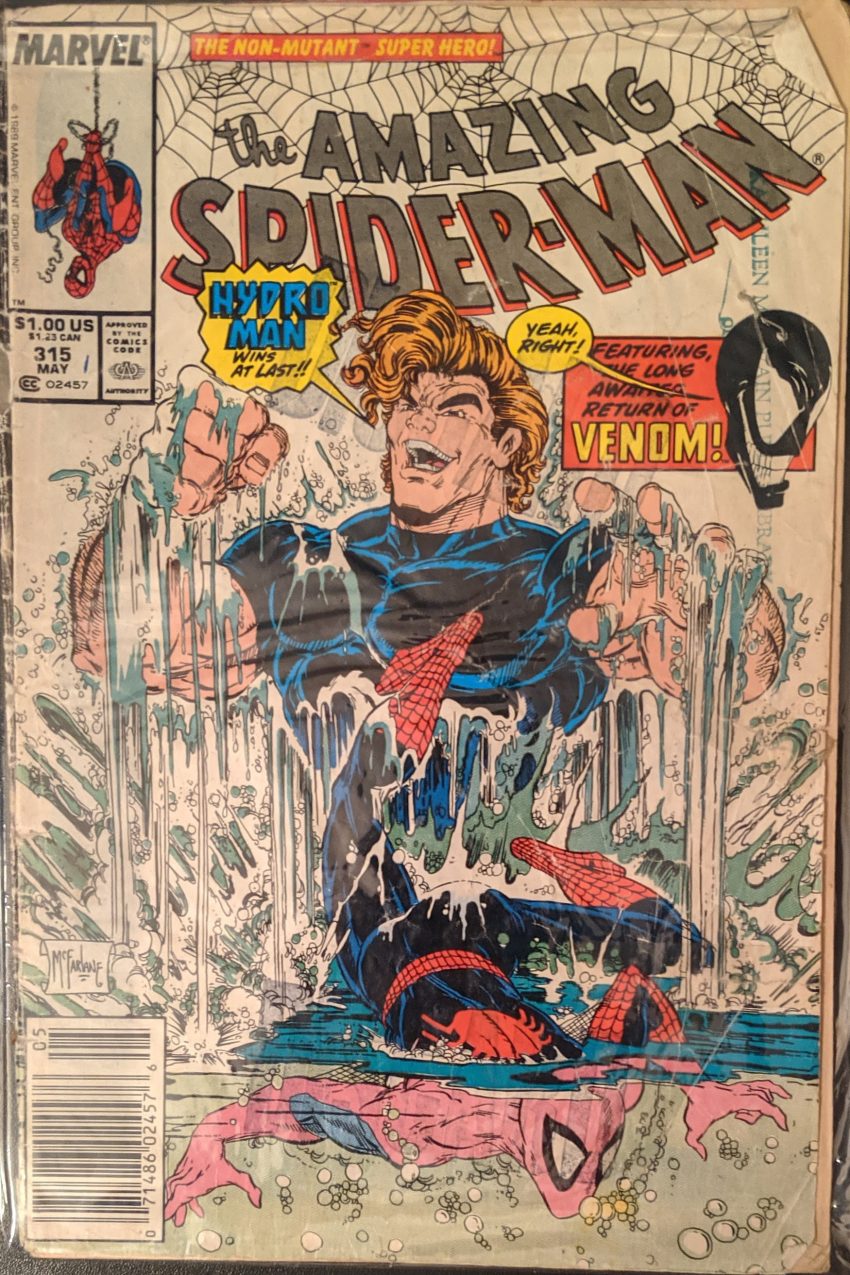 1989 is back! As the stamps on the cover and inside will reveal, my battered copy of this issue originally belonged to my local public library. I began reading Spider-Man (And many other comics) out of the library around this issue, maybe with this issue, I’m not sure. When I got serious enough to start buying comics, the library selling off their copies seemed like a great way to go back and get back issues. It ain’t in great shape, but there’s plenty of sentimental value. Anyway, Hydro-Man! Venom! Something old(ish), something new. This period still finds David Michelinie, Todd McFarlane and Bob Sharen at the helm of ASM (Sharen colored ASM 416 in our last post. That guy has colored so many Spidey comics!). The internet tells me Hydro-Man has only appeared in 3 comics since his bizarre introductory run by Denny O’Neil and John Romita, Jr., and one of them wasn’t even a Spidey comic (We’ll see the other 2). As he did with most everyone, Todd McFarlane seems to have given him far more luxurious hair. Another thing to note, because I forgot last time we visited this period: “The Non-Mutant Super Hero!” The X-Men’s dominance at Marvel had gotten so out of control that Spider-Man being a popular character who isn’t one of them was so noteworthy, they put it on the cover every month. Wild. THE non-mutant super hero. Don’t you worry about the likes of Captain America, Iron Man, Thor, Daredevil… Spidey is it! Hey, let’s get to it, already. It opens with a guard at The Vault seeing an unconscious guard in the cell of Eddie Brock, and foolishly dropping the “sonic shield” that holds him prisoner to investigate. The captions say that will cost him his job…

This would be my first time seeing Venom. Heck of an intro. And if I seem totally unimpressed with attempts to make him more heroic, well… why wouldn’t I be? Every Venom story seemed to include killing someone innocent and then saying it totally sucks to have to kill innocents. Venom is not a cool guy. While that’s happening, Spidey is fighting Hydro-Man. He gets him good and mad and hopes that’ll make him charge into a power box as Spidey pulls the door off, but it doesn’t work.

Morrie’s looking pretty svelt these days! Spidey retrieves his camera and internal monologues about how he’s got a wife to feed now in case you don’t know, then slips into his recently set up basement dark room to change back to Peter.

Cousin Kristy… still a thing in this era. Back in Colorado, Venom puts some of the alien in a guard’s mouth, saying to tell him how to escape or choke to death on his own spittle, teaching little me the word “spittle,” and then he’s free to return to New York. In New York, Spidey swings home from delivering his photos when he sees a commotion at an ATM involving a familiar face, who is furious the machine won’t spit out more than $500.

I feel like Micheline is really besmirching Nathan’s character in this era, and that trend will continue. Of course, this was my introduction to him, so I grew up thinking he was just a jerk. Peter comes home and wants to talk to MJ about what he’s learned. At the same time, Aunt May catches Nathan in the kitchen. He soon takes off, leave May puzzled. He’s gone to meet some goons he owes money, and when they try to muscle him, he cuts one with a steak knife.

Aw, Nathan. On the last page, we see Eddie Brock catching a ride to New York with an unsuspecting family, so get ready for only the 2nd ever Spidey/Venom story next issue.

In this block, we will see many Spider-Man drawings that look oddly faded. These will be the ones I smooshed Silly Putty onto to copy the image. Hey, I was just a kid, what did I know?