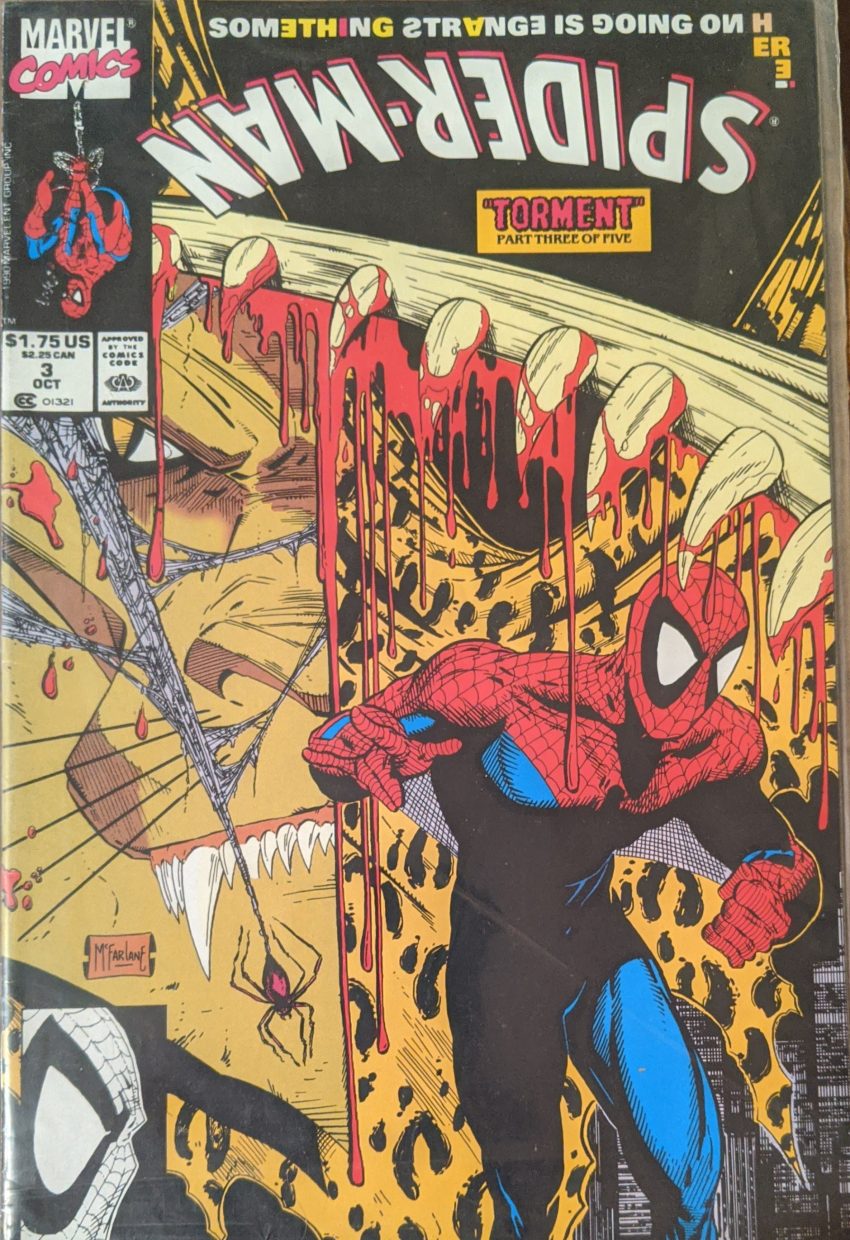 The cover lets you know we’re in for more Kraven stuff, but as a kid, I’m not sure I would’ve seen Kraven yet. This issue would’ve been very weird for me, for reasons that will become obvious. They forgot to say something about “The Arachknight” on this cover, but don’t worry, it comes back for 4 & 5. Another 4-panel page of random shots of the city gives way to another 2-page spread with “–Rise above it all!” He’s got a formula and he’s sticking to it. On that 2-page spread, The Lizard is smashing Spider-Man through a fire escape.

It has begun to fascinate me, looking at this stuff as an old and jaded man, how Todd McFarlane, for better or worse one of the most influential superhero artists of his generation (And ever, per capita, really) was pretty bad at fight scenes. KIND of an important aspect of superhero comics. Rob Liefled was, and is, far worse. Jim Lee was, and is, much better. But I think it’s fair to say that McFarlane was really the one leading the charge on this artist revolution, kicking in the doors the others came right through behind him, and it’s just weird that his fight scenes are kind of crap. Anyway, The Lizard’s mysterious controller says The Spider must suffer, and then Spidey flips The Lizard off of him and tries to put some distance between them.

One assumes DeMatteis & Zeck saw this. One assumes pretty much everyone who reads comics saw this. Do you think they felt flattered? Ripped off? Both? The Lizard kills that bird as we cut to MJ headed home, hoping Peter will be there. Back at the fight, The Lizard is about to tear out the throat of the unconscious Spider-Man when the voice commands him to stop. And he does, freezing in place, as the face of the mystery lady is revealed.

Calypso, naturally. The only person that really makes any sense for this. Not that I had any idea who she was at this time, either. But this storyline represents only her 3rd ever appearance (We’ve seen the first two in ASM 209 and TAC 65), and her first since 1982, so it’s an obscure pull even for the seasoned Spider-Reader. It was obviously someone doing DeMatteis-inspired Kraven stuff, so it kinda had to be her. And now that it’s officially her, what the rest of this story will be kind of reveals itself. We’ve seen it before. Anyway, Calypso makes The Lizard throw Spidey off the roof, and he lands in a pile of trash, saving his life.  Cut to MJ still traveling home, thinking Peter has been pushing himself really hard and hoping he can get a lot of sleep this weekend, then back to the unconscious Spider-Man, who flashes back to his origin for… some reason. The caption describing the moment he learned UNcle Ben was killed by the man he didn’t stop saying “You became a man. A Spider-Man!” is prrrrrretty funny, but not on purpose. MJ gets home and her taxi splashes water on her, and then…

“…the bowels of man’s garbage…”

Ok, this was definitely the first time I saw Kraven, because now I remember my very first reaction to this macabre cliffhanger is “Why isn’t that guy wearing pants?” Still a reasonable question. Is he a zombie? Is this obviously just an illusion caused by all the “magic” and poison? I bet you can guess. Me, I’d literally never seen such a mutilated person in a comic book, and this story’s overall tone was not what I was looking for, but I was also aaaaall the way in the tank for McFarlane. He could do no wrong, he was the best artist of all time. So I had no idea what to make of any of this.