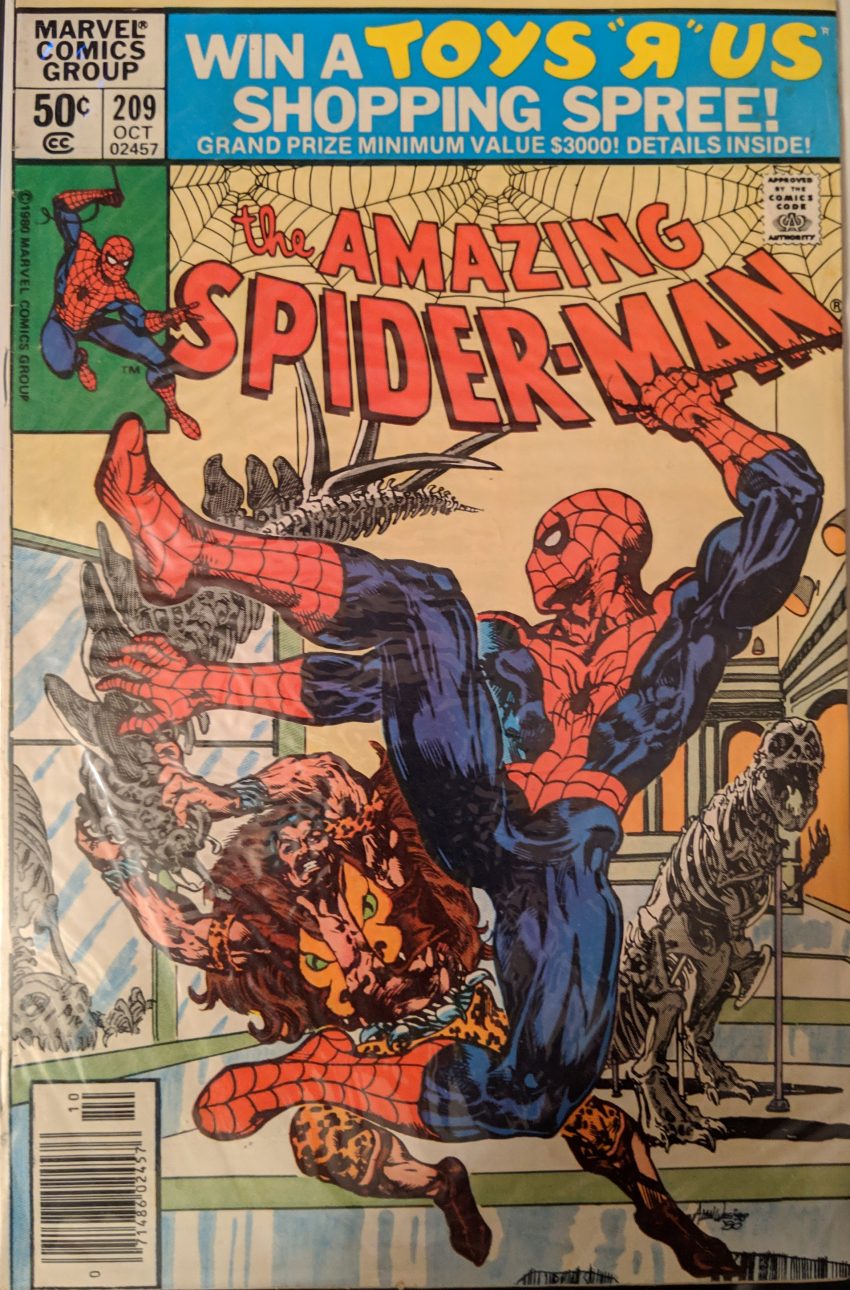 Alan Weiss and a whole bunch of inkers drop in for the art on this one, as Kraven The Hunter is lobbing a spear into a Spider-Mannequin somewhere in the Carribbean. He’s with his main squeeze, Calypso, in her first appearance, worrying about his honor and feeling bad about what he did to Tigra last time we saw him (in MTU 67).

(It totally rankles) It’s cool, I guess, that he has decided it was honorless and lame. Calypso isn’t so sure. And even though he says he’s moved on from hating Spider-Man (You can tell by the way he’s throwing spears at a mannequin dressed like him), she seems to want him to give it another go. And since they “have to deliver a shipment of animals to New York,” well, I assume he’s gonna. Meanwhile, Peter Parker is being a jerk to Debra Whitman.

Again. As usual. This is one of the weirdest storylines in the history of the franchise. She’s pretty much his girlfriend at this point, he’s not juggling a bunch of women like he has been, but he is SUCH a jerk. “No chance, Deb, your uncle is SCREWED!” And then they always having him feeling terrible a second later but letting her walk away, anyway. Sheesh. So of course he suits up and goes off to try to find Deb’s uncle and help him (Does he even know Deb’s uncle?) down at the docks. Which brings him swinging over a certain shipment of animals, which makes Kraven nervous and Calypso excited. She runs off and frees a bunch of the animals so Kraven will have to use all his skills to subdue them. Real pal, she is. Spidey gets into the action, too, of course, leading to some pretty bizarre business.

“Yer basic vicious eagle.” That guy is a crazy person. And that model is not Mary Jane. You might think it was Mary Jane, being a model with red hair in a Spider-Man book, but you fool, you. That’s just some other lady, and yer basic vicious eagle attacks her, knocking her off the pier. Spidey swings in and saves her while also catching the bird. I guess it really isn’t MJ. That just seems unnecessarily confusing. Kraven has rounded up all the animals while Spider-Man caught a single bird.

Spidey sees Kraven helping and decides there’s no reason for them to fight, but Calypso is pretty mad about it. She lies and says Spidey set the animals loose and then slaps Kraven while insulting him, trying to get him to fight. This lady is wild toxic. She talks him into it, but Peter has already headed to work, where he’s late as always, and where Rupert Dockery wants him to make up a fake story about teachers sleeping with students at ESU and get pictures of it.

How would you even do that? Then Spider-Woman appears out of nowhere to tell us she’s had trouble with this Dockery guy in the past and that we should buy her comic. Hey, come on, this is way too desperate. Anyway, in a weird page where the dialogue doesn’t seem to match the art, Peter refuses, smiling like someone told a joke, and then Kraven bursts in demanding the paper print a challenge to Spider-Man to come fight him. Peter, still smiling, thinks he doesn’t really have to go, but of course he does.

It’s a pretty typical Kraven fight. Kraven starts using everything as weapons, from ancient spears on display to, well…

I do not understand why people insist on using this dumb character. Only this time, he’s got an appreciative audience. He gets Spidey with the Vulcan Nerve Pinch, but even losing control of his limbs doesn’t stop Spider-Man from wiping the floor with Kraven. And then… the comic just ends outta nowhere. It looks like they ran out of pages.

What? Got pretty philosophical in the end, there, Peter. Whatever happened to Deb’s Uncle? The end, that’s what. Not the best issue.