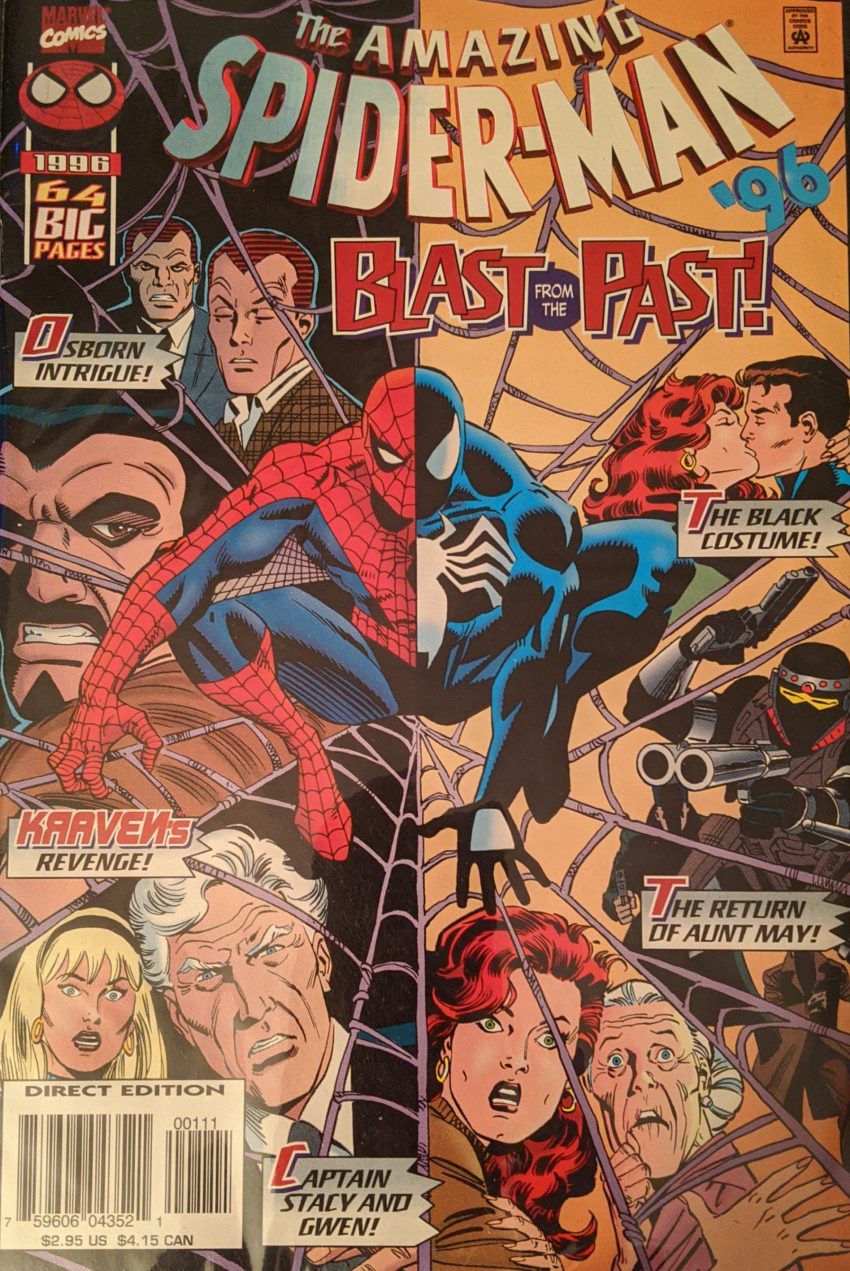 The appearance of this comic at this time is SO jarring. Extremely un-90s Ron Frenz art, a cover full of dead people, 2 versions of the real Spider-Man. Very left field. Also left field is the naming structure. Marvel drops the numbers for the year with annuals starting in ’96. After a few years of this, they just start calling every annual #1, because that makes plenty of sense. Numbering goes totally insane at Marvel in the 2000s. Anyway, this one reteams Tom DeFalco & Ron Frenz on Spider-Man, and Ron has the great honor of being inked by John Romita, Sr., so it’s the best looking work of his career. Good ol’ Bob Sharen rounds out the team. Despite everything on the cover, we open on the Ben Reilly Spider-Man smashing into a subway car. He’d been riding said car in regular clothes when some goons began robbing the passengers, so he slipped away to get to work.

Frenz loves a Buscema punch. No mistaking Romita’s hand on those Spider-Man drawings. They even refused to do modern webbing. Ben swings home expositing his complicated eal and thinking about how he envies Peter & MJ’s happiness. In spite of all we just saw, he thinks about how none of the relationships he’s had since he left New York “managed to last or grow into anything significant.” Ouch, Janine! To be fair, these guys probably had no idea about Redemption when making this, and also it wasn’t over yet when this was published. He thinks things used to be different…

And suddenly it’s the 60s again. Romita’s presence grows much larger when we go back in time. Pete asks Gwen if she’s ready to tell her Dad about their relationship, and they find Captain Stacy talking to Joe Robertson, so we can probably place this one between issues somewhere in the 70s of ASM. For more period flavor, we watch Harry Osborn get verbally abused by Norman for just hoping to get some fatherly advice, and then go back to see what Joe & George were talking about.

These might as well just be Romita pages. I am not complaining, but I wonder what it’s like for artists who have him burying their style. Frenz is still making his presence felt, tho, such as on this next page, which also adds a curious relationship to 2 character who never met…

Hm! Good job on the Stan Lee voice in that bottom caption, too. Soon, an underworld snitch hears some dudes talking about getting paid to go scare a college kid named Osborn, and he knows just who’d be interested in that: Kraven the Hunter. Still smarting from the events of ASM 47, Kraven’s got it in for the Osborns, and thinks this is a chance for some revenge. We see Peter sell some photos to JJJ and get a look at Ned & Betty just ‘cuz before Robbie tells Peter that Captain Stacy has a theory about Spider-Man he wants to share. Peter spends the rest of his day nervous that those 2 will expose his identity, and then heads to The Coffee Bean to see the gang.

Peter runs outside and gets into his work clothes, knowing full well his disappearance right before Spider-Man arrives is not going to help him. But then he sees Kraven bounding toward The Coffee Bean and goes to investigate. Inside, the goons declare their intention to rob everyone, and then one of them recognizes Captain Stacy as the man who put him him in jail, so things are pretty tense. But outside…

It’s always a pleasure to see Romita, Sr.’s Spider-Man, even if he’s not technically drawing it. Kraven’s still got his weird nipple lasers and everything. Back inside, the goon is about to kill Stacy when Spidey & Kraven come smashing through the window. Spidey uses Kraven to cushion their fall and take his foe out of commission for a second, and Captain Stacy whacks one of the goons with his cane, but not the one who wanted to kill him, so…

When Stacy dropped some papers earlier, Peter & he exchanged the same dialogue. Seems a bit of an odd way for him to figure this out, but there it is.

A vast worldwide empire, huh? Seems a bit grand for the Osborn we knew back then.

..until the day he dies, he thinks. The book helpfully reminds us that soon George would be dead and Gwen would follow before returning to the present for Ben to say he’s never been able to commit to anyone or anything since Gwen died. Seems a bit much! But he thinks maybe it’s time he changed. As we’re done. That was a pleasant little return to the old days. DeFalco’s writing may be woefully out of touch in 1996, but when he’s trying to ape 1966, he’s right at home. Next up, Fabian Nicieza, Steve Lightle, Al Williamson & Nel Yomtov on deck for another flashback tale, this time returning to right after Peter & MJ got married. A time when, as we’ve seen, Nicieza got to write a few Spidey comics. Our man is having trouble coming to grips with having gotten married.

Spidey swings home, wondering if it’s fair to MJ to be married to a guy who risks his life all the time, and wondering if that would be fair to future kids. Inside, MJ is failing to make some dinner.

The pot lid on his head is funny. Cut to a mysterious figure smashing Uncle Ben’s tombstone! And then… a continuity issue…

But… Ken Ellis has only been on the scene for a couple years now in 1996. He can’t be hired back in 1987! Peter & the anachronism go to investigate  the homicide. While Ellis fails to get by the police tape, Peter slips off and gets some shots of the crime scene. Meanwhile, some SHIELD agents bust some Russian gun runners looking for info on a Russian super assassin called… well, called Deadmaker. That’s so silly. One agent intimates that he’s after May & Peter, and then we see a weird hand print on a tree in Aunt May’s yard.

Gasp and such! Peter & MJ are having a quiet night in when his Spider Sense goes nuts. With no time to get into Spider-Clothes, he just grabs a webshooter and goes up on the roof in time to see a missile flying toward their place.

Peter stops the 2nd missile, but by the time he gets home, MJ is gone. Soon cops are swarming his place, and soon after that, the SHIELD agent from earlier and Ken Ellis show up. The SHIELD agent, Cru, says this is about Peter’s parents, and makes Ellis give them some privacy. Peter’s folks died in their duty as SHIELD agents, you see.

May realizes they’re in Richard & Mary Parker’s old apartment as the son of “Deadmaker” wearing his father’s gear announces he wants to kill Peter in revenge. Meanwhile, Peter & Agent Cru have discovered May was taken and Ben’s grave was desecrated, so he runs off to the old apartment. He says he found out about it after he learned the truth about his parents (We’ll see that classic tale one day), so he’s on the right track.

I’m continually surprised by how much I like Nicieza’s Spider-Man voice, because cards on the table, I didn’t care for much of anything he did in the X-Office. It’s a shame he didn’t get to do more with the character. Because we’re running out of pages, Lightle handles Spidey’s showdown with “Deadmaker” in a crazy 15-panel page of them smashing each other around until Spidey gets blown off a roof.

The fight somehow takes them onto the bridge Gwen died on. The geography of this doesn’t make any sense to me, but here we are.

Well, there you go. A weird little story, but Peter reckoning with his new responsibilities and his parents’ past coming back to haunt him were both good angles. Not bad at all. This annual was a little oasis in the very bizarre and mostly terrible desert that is Spider-Man in ‘96.