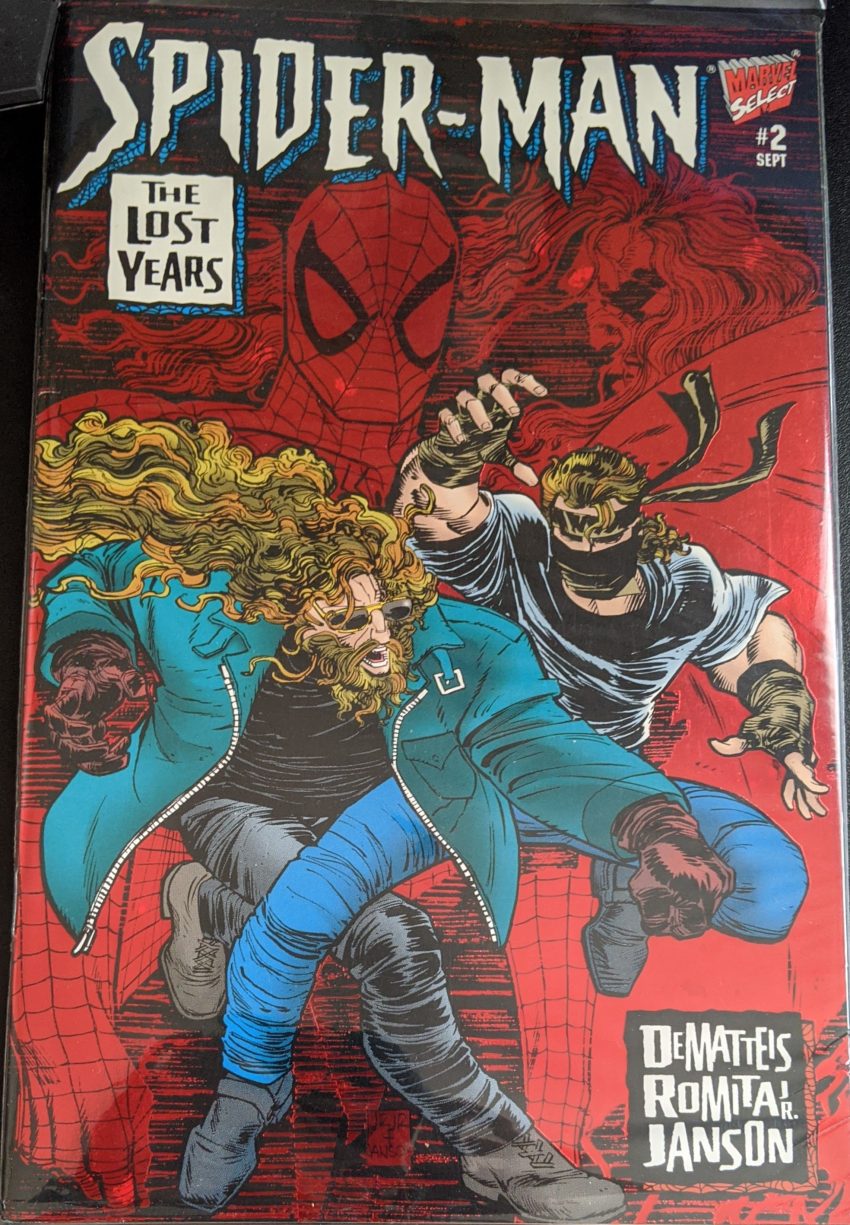 Only a few years prior to this, JR illustrated Daredevil: The Man Without Fear, a 5-issue series where Frank Miller explored DD’s earliest origins. It’s where the black suit he wore on the Netflix show was first created. Ben’s outfit here feels a lot like that. Kaine, meanwhile, is wearing the coat Peter wore in The Official Marvel Try-Out Book. The frequency with which Romita, Jr. draws this coat is really starting to amuse me now that I’ve seen it. So, inside, Jacob Raven is still at the mercy of those goons.

A lot of colorists struggled with the seismic shift in their industry that is digital color, but Christie Scheele adapted quickly. This series looks really nice, especially for 1995.

I mean, this may not be up to the standard we expect today, but she’s light years ahead of the monthlies. Also: Romita drawing people in the rain. Can’t beat it. In a dynamic 2-page spread, Ben flips over the car, smashes through the back window and yanks out Raven, and when the goons stop the car and get out, he flips it over, causing them to all flee on foot.

Ben sits on a nearby roof watching, thinking about how using his powers is so hard to avoid, and then takes off. He was watched by Kaine, of course, because watching people from the shadows is Kaine’s whole thing.

Complicated. All this is so much easier to read than DeMatteis’ Spider-Man. He’s not doing dumb things to characters I like, or wontonly killing them for a brief moment of pathos, or forcing them to act wildly out of character to serve his story. I don’t know these characters. They are what he says they are. There’s no history to conflict with. After suffering through Peter belting MJ and deciding The Jackal was his friend and all that, this is a relief. It’s dark and tuff and all his other tics, but that’s all fine here, because this isn’t Spider-Man. This is a story that isn’t blatantly stupid, with lovely art. How novel in 1995. Anyway, in prison, that Tannen guy is upset to hear only Raven’s wife was killed, and tells the puzzled guard he’s paid off that he’ll take care of it himself. Then we cut to Raven with Louise in a church. Raven is having a real crisis of faith over the horrors he’s been through, understandably. Meanwhile, Ben has started his first day as a teacher’s assistant, and the professor he’s working for is very impressed with his work.

But while Ben is romancin’ this MJ-stand-in, at night he’s terrorizing Tannen’s mob, attacking their safehouses all over town, not sure if it’s a sense of responsibility or the thrill of his powers (A frequent question in Conway’s 70s stories). And also meanwhile, Kaine has been developing an actual relationship with Louise, and feels happy for the first time in his life. And then someone kidnaps Raven’s kid out of the hospital.

Peter Parker has brown eyes, by the way, yet Ben & Kaine have blue eyes here. Kaine has a worse spasm of pain than he’s ever and, and those weird veins or whatever they are he has in the present begin to manifest on his arm, causing him to flee Louise’s place. Ben is smashing up another of Tannen’s warehouses with too much force due to his sadness when a much more monstrous Kaine shows up, wanting to take out his suffering on his favorite target, and they begin rampaging through the warehouse in a way that has nothing to do with the goons inside.