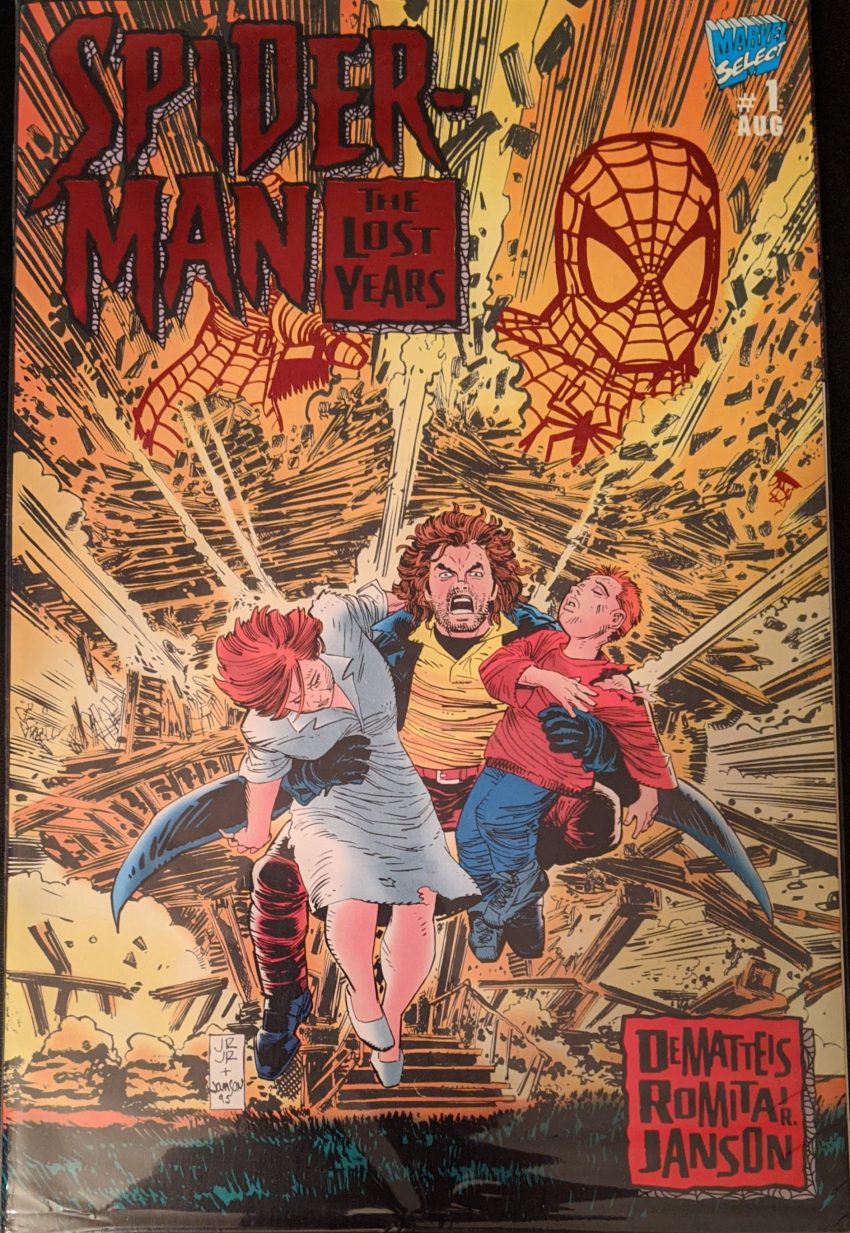 Lost Years! Probably shoulda stayed lost! But this does continue John Romita, Jr.’s return to the fold, so that’s cool. And it’s the 90s, so it’s a shiny foil cover! Comics never met a gimmick they didn’t like at this time. We’ve seen foil, holograms, “chromium,” there was glow in the dark, trading cards, you name it. There was an Image comic with squishy fake blood in the cover. DC did a Superman book with a cover like a Colorforms set, that was kinda cool. Anyway, yeah, we’re looking at what kinda stuff Ben Reilly got up to out on the road, with tour guides JM DeMatteis, Romita, Jr., his most frequent inker Klaus Janson, and colorist Christie Scheele. The book opens with a sequence of a guy losing consciousness driving a semi truck on a crowded road at night, and Ben leaping into action to save him and the cars around him.

The mullets only get more powerful as JR goes on! Ben gets the truck stopped and gives the guy CPR on the side of the road, then vanishes. As state troopers interview the mom & daughter from that car, Ben’s narration lets us know he’s been traveling the world for 3 years, and has come to enjoy pushing himself to the limit.

Ben was traveling to Salt Lake City, and we cut to there, where Kaine is sitting in a bar, thinking about Ben, who he’s hounded all over the world. A prostitute comes and hits on him, and when he says nothing, her pimp gets involved.

Man this book looks great. So, then. We have Ben and Kaine in SLC, Kaine has met Jacob Raven’s partner, and we know what happened to her, so now we’re gonna see it all go down.  That Tannen guy pays a guard in the jail to get a hit carried out for him, and then Ben uses a letter from Trainer and some fake credentials to ace a job interview, and now he’s going to be a TA at a college, like Peter was in the 70s. But he knows it won’t last. He knows his fake credentials will be found out, and he’ll flee for a new town. It’s how he’s been getting by since he left New York, and Trainer is in on it. So Ben just plans to make as much money as he can before he has to leave. After the job interview, he goes for breakfast.

A Peter Parker smitten with a redhead? What were the odds? Note her face coming up off the hand she was resting it on as she turns to look at Raven in panel 4. Those natural details delight me.

Nothing good can be in Janine’s future, eh? Meanwhile, Louise is busting a drug dealer under cover when more goons show up and overwhelm her. But Ben isn’t the only Peter Parker in Salt Lake City recently smitten with a local girl, and Kaine comes crashing through the window to save her. He brutalizes all the goons, but leaves them alive at her command. She is obviously into him, too, as we cut to Jacob Raven being kidnapped by that Tannen guy’s goons. A lotta goons in SLC!

Ben follows his Spider Sense to a house which immediately explodes. He rushes into action, rescuing a mother & child inside and then disappearing, as usual, internal monologuing about how he didn’t want to admit he loved this stuff, and in moments like this, he was Spider-Man. Guess whose house that was?

Alrighty. The stage is set for the rest of the series. This is easily the best issue I’ve read this whole block. After all the awfulness I just read before, anything would seem like a masterpiece, but it’s a perfectly good little thing. Nothing earth shattering, but it’s not supposed to be.