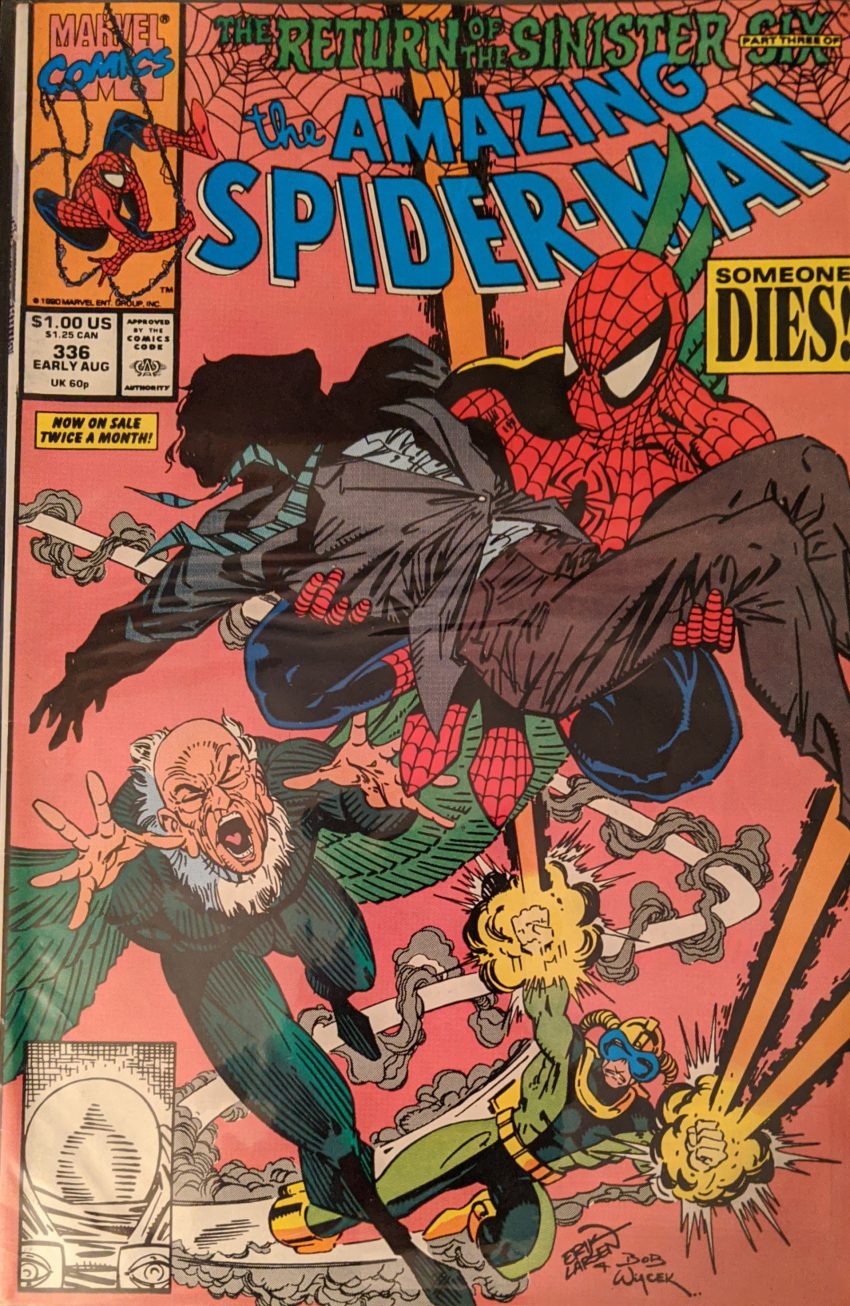 Golly, who could that be? Mike Machlan slides into the inker chair as The Vulture is demonstrating his powers for The Kingpin and some other business people by destroying a dummy.

Larsen is certainly going with the Bill Sienkiewicz school of Kingpin design (Also seen in the Spider-Verse movie). Meanwhile, Spider-Man is headed to Queens, because he’s finally made time to try to find out why Nathan had that big bag of cash a few issues ago. After Nathan stole from May to try to pay off his gambling debts, Peter is worried that this is more of the same.

Hm. Elsewhere, Mr. Grouper, the guy with the giant face who was with Kingpin (I guess Larsen likes his crime dudes Dick Tracy-style) has gone to hire Chance to make sure Vulture’s hit works out. Chance lets us know his deal and then were with May & Nathan, as he says the waiting to die is driving him crazy and she tries to put on a brave face.

Ok, wait, how does Nathan know people are trying to kill this Trask guy? And now they’re not even spelling his last name right. Always liked how the reflections in his glasses stand in for his eyes there. I’m not even commenting on the gratuitous butt shot. Peter is off to photograph the christening of a giant boat named The Trask Duchess, and then we learn Nathan & May are there, too.

Were all these cameos just Larsen wanting to draw more of the Marvel U? I didn’t get it as a kid, and I don’t get it now. Trask barely has a chance to say hello to the assembled crowd before The Vulture is raining bombs on him, and Peter has to go change into his work clothes.

One of Larsen’s most reproduced Spider-Men, there. Vulture takes off with Spidey webbed to him, and even Spider-Man comments on how this is what always happens as he swings around, throws Vultch off balance and forces him to crash to the ground. But then Chance shows up, so our guy is now dodging all sorts of firepower.

…his helmet. With a face full of web, Chance crashes into a water tower, and then just flies up as fast as he can to escape, officially giving up. It’s all on Vulture now, and he’s chosen a new tactic.

Vulture could have at least recognized his old friend Nathan, but…

There was a great opportunity to have Nathan actually fall through that negative space in each panel, but it’s just 3 different shots. Kind of a waste. Vulture is now improbably surrounded by an army of helicopters, but Doc Ock shows up in his ship and offers him an escape. Spidey sees them go and recognizes the ship, but he’s got other things on his mind.

Thus, poor Aunt May loses the love of her life a 2nd time, and Nathan Lubensky is booted out of the book. I just think it’s foul. I get it. Aunt May is supposed to be alone, you want to get back to status quo. Maybe you even feel like you can’t leverage Spider-Man’s endless guilt about Uncle Ben as well if Aunt May has moved on. But Nathan didn’t deserve this. Nathan was a great character under Stern, charming and fearless and fun. Not only that, Stern used Nathan to make Aunt May a more vital character, breaking the 20+ year cycle of her being on death’s door and letting their romance make her seem younger and more lively (In a natural way, as opposed to 21st Century Spidey comics just being like “I know she always seemed to be in her 90s or something, but she’s definitely in her early 60s now, deal with it”). Nathan more than earned his place in the books. To first be reduced to a mean old codger, then given a terminal illness, then killed by, of all people, a villain who was a quasi-friend, who doesn’t even seem to remember him, through a series of rather absurd coincidences. Coulda just broke them up over his gambling and called it a day. Nathan Lubensky deserved better. As a kid, of course, I barely knew Nathan, and while this was a sad turn, it also didn’t mean much to me. But as someone who’s now read Nathan’s whole story, it really sucks.