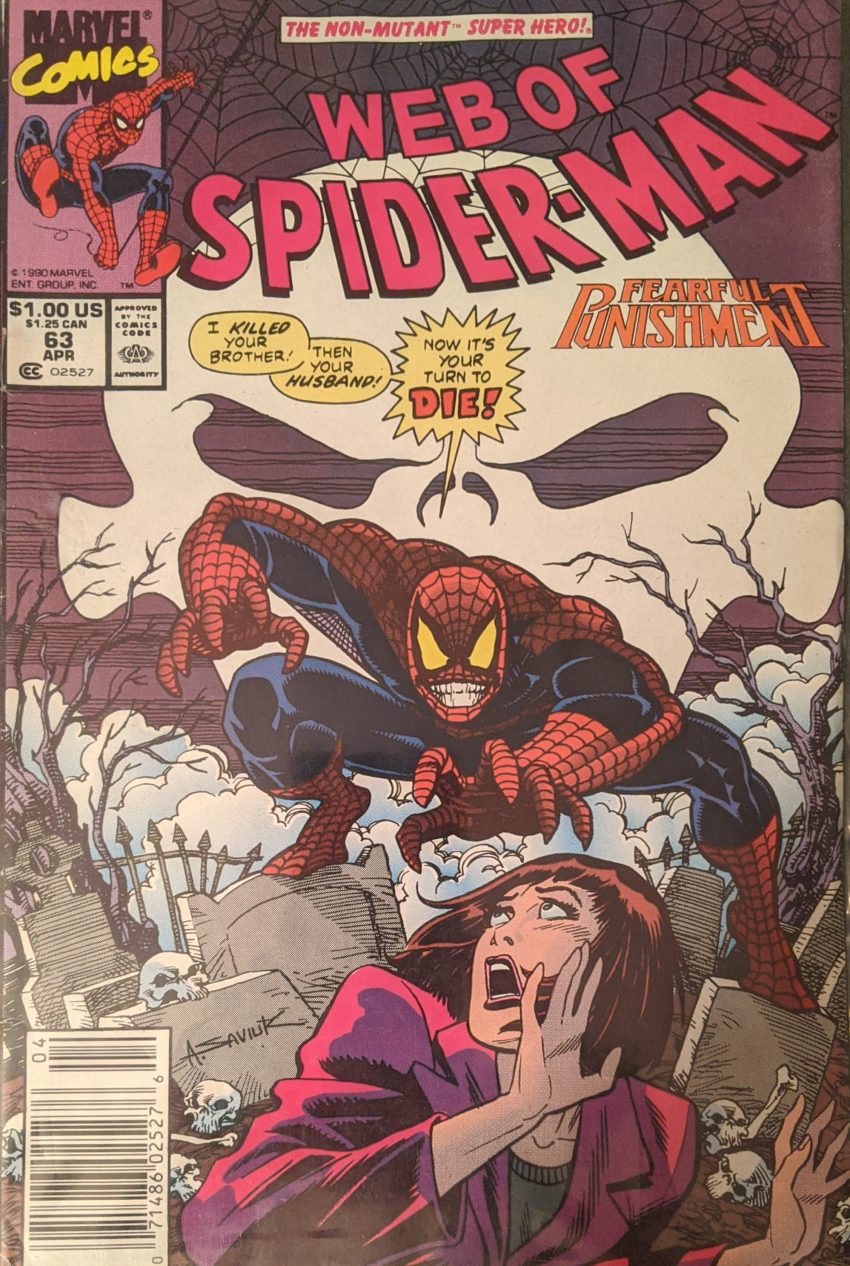 That more or less looks like the demon Spider-Man Flash Thompson (And Betty, a little) fought during Inferno in TAC 148, AND kinda looks like Venom, and yet, isn’t either of those things. Feels unnecessarily confusing, but you gotta sell comics, I suppose. This issue is running a bit early because it has a plot point that carries over to TAC 163 even tho that issue is a direct continuation of TAC 162. /sigh. Get it together, y’all. Betty Brant is at the graves of her brother and husband in the rain, talking about how their lives were so crazy and whatnot and how her therapist says she has to accept the world as it is.

I may not know much, but I know nobody with a skull in their eye and pointy ring on their finger is here to be friends. Lawrence Cranston is the real name of a minor supervillain, but we’ll see which one here in a bit. Meanwhile…

So, lemme get this straight. According to Gerry Conway, Peter’s Spider Sense can be set off by Mary Jane just being nearby, neither in danger nor a source of it, but it will not be set off by a gross creep spying on him through his skylight. Ooooooooohkaaaaaaaay. As Katzenberg thinks he came here to try to figure out how Peter gets those photos of Spider-Man, down in the apartment the phone rings. It’s Betty Brant, in terror, begging him to get Spider-Man to come to an address, as a mysterious purple cloaked figure watches. Before Katzenberg can see him swing away, he’s discovered on the roof by Harry Osborn, who tells him he’s trespassing and gets punched in the mouth for it. Good times.

That’s Mr. Fear. Not the original Mr. Fear, tho, that was Larry Cranston. He gives Betty a gun and tells her to wait for Spider-Man.

MTU 92! Deep pull! Has that one posted yet? I guess not. I have read it, tho, and it’s pretty goofy. I don’t think I knew it was a new Mr. Fear, tho. Maybe it wasn’t til this issue said so, who knows, comics can be like that. At any rate Spidey arrives at the appropriately spooky old house and sneaks in, confused about why Betty would be in a weird old dump like this. Then he hears a scream.

Really Scooby Doo-ing this one. So Spidey is now terrified of Mr. Fear, and Betty is terrified of Spider-Man, and Mr. Fear punches Spidey into the room with Betty for added fun and excitement. He tells Betty she must destroy the thing she fears, but that turns out to maybe be a bad idea.

Not even a headbutt, a FACEbutt. That’s gotta hurt! The collapsing ceiling pours even more fear gas into the room, and as Mr. Fear emerges from the rubble, Spidey flees. But when the villain grabs him and tries to talk him into going crazy, SPidey just flips him into the floor, which collapses under him, because this house is apparently made of toothpicks. Fear’s not done, but he is momentarily out of the picture, leaving Spider-Man to deal with a terrified and armed Betty Brant. Spidey tells her he’s not what she fears.

Not the first time our hero has been threatened with incriminating photos, but certainly the most damning. How’s he gonna get out of this one?