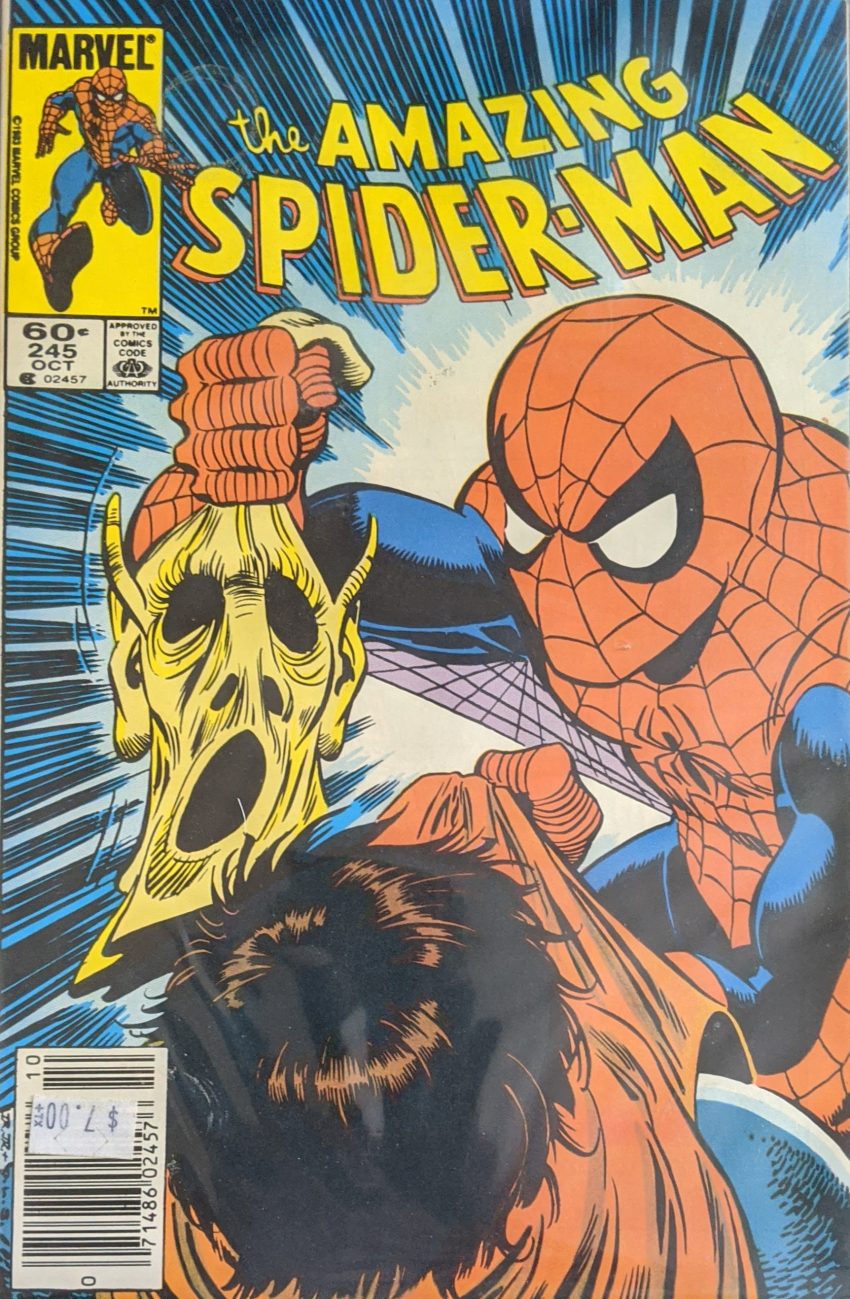 It can’t be that easy, can it? Dave Simons is back on inks this month. Has anyone inked more than 2 issues in a row of this run? I don’t think so. What was happening here? Spider-Man has gone to see DA Tower, not seen in these parts in awhile.

Tower says he would, because they have security clearance and actually cooperate. Then he asks Spider-Man to tell him everything he knows about Hobgoblin, but Spidey just leaves, rather proving Tower’s point. But, as he swings away, he thinks to himself that he doesn’t want the fact that Norman was The Green Goblin to come to light as part of all this, and it probably would if Hobgoblin’s reason for all these robberies was known. But… if you catch him, surely that’s a guarantee? He thinks Harry has suffered enough and doesn’t want to do that to him. Then we get what may be the first real clue to the Hobgoblin’s identity, as we cut to a “plush mansion on Long Island…”

Hm. Was that Hobgoblin’s mansion, or was he just using it illegally? As we ponder that one, Spider-Man heads to The Daily Bugle, where Peter Parker searches their morgue files for info on Lefty Donovan. But he’s interrupted by one Betty Leeds, who says he looks like he hasn’t eaten all day, and insists he join her & Ned for dinner. On their way out, they see JJJ leaving with a gym bag, which sparks debate about why he would be exercising that lasts all the way to the restaurant. Y’all are nosy. When they arrive, they find Ned seated with… Mary Jane Watson. The whole thing was a setup.

So hard being everyman Peter Parker, hm? Our bandaged mystery man suddenly wakes up. He takes off his bandages and knocks out a hospital orderly, stealing his clothes to make an escape. He feels compelled to drive back to the site of the exploded mansion, tho he doesn’t understand why. Then he feels compelled to look under the carpet, and seems almost surprised to find a hideout for The Hobgoblin hidden beneath the house.

Interesting! Meanwhile, Spider-Man’s gone to see his ol’ pal Sgt. Snider to ask if maybe he can get him some info on Lefty Donovan. Snider has heard Tower said no and tells Spider-Man he absolutely cannot read the file on Lefty Donovan he’s holding.

Things are getting weird on the Goblin front, but Spidey takes the invitation. Hogboblin is in Times Square just causing chaos and blowing things up, waiting for Spider-Man to show. He almost kills a few people before our guy makes it to the scene.

Spider-Man webs up his own chest for padding as the dumpster slams into him. He catches it, but he’s in pretty bad shape now. The Goblin tosses a bomb at him, but even in his disoriented state, he’s still Spider-Man, so he webs it and zips it right back at his foe.

That’s it for Lefty. Too bad for him. But The Hobgoblin lives to scheme some more. And the people are lovin’ it! There’s plenty more guesses in this issue’s letters.

Kraven the Hunter! That guy is nuts. Lance Bannon is getting a lot of votes, it seems. But is he The Hobgoblin? Who could it be? We’ll get to the truth someday…