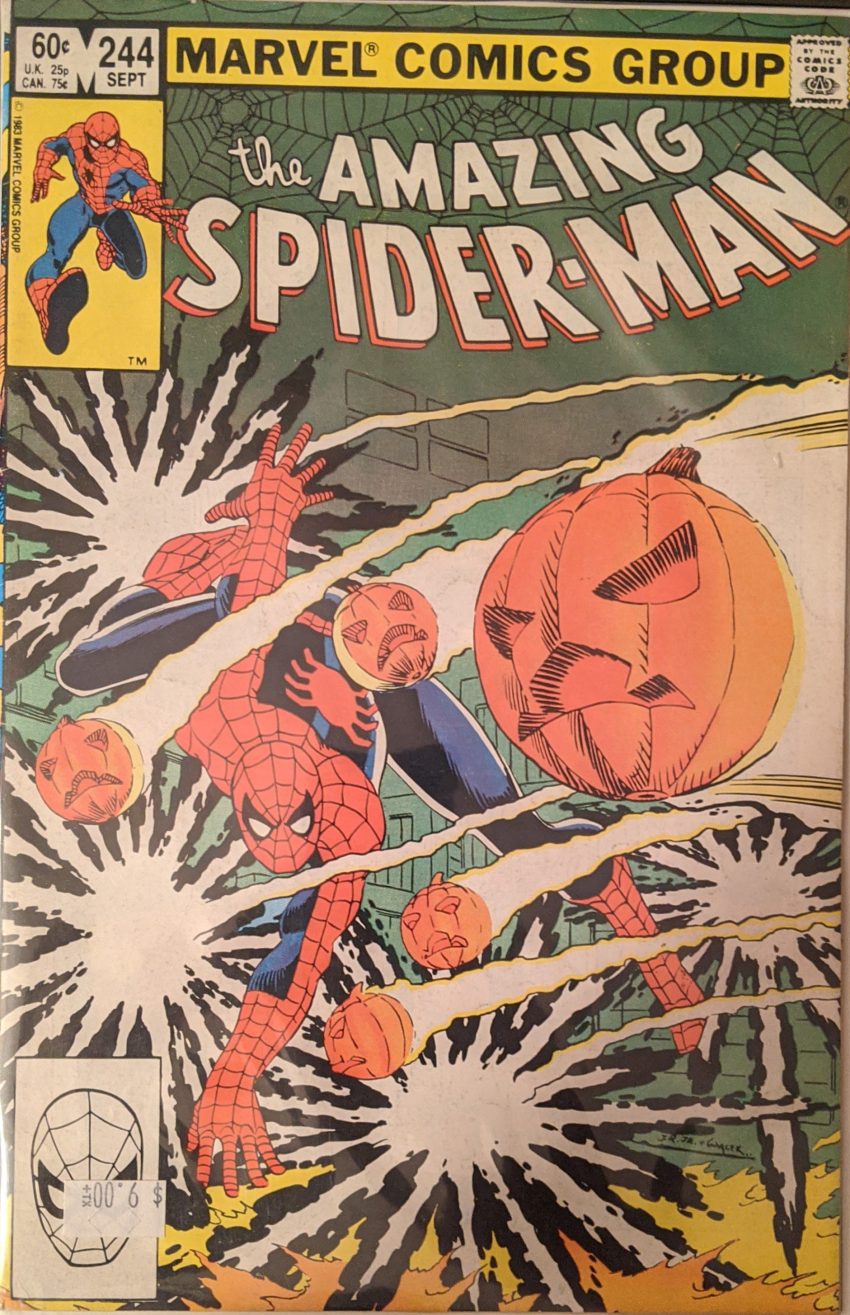 Uh-oh, look who’s back. It’s been a whole 5 issues since the biggest new Spider-Man villain since the 60s hit the scene, which is a pretty long time, actually, almost half a year. Time for more mystery and excitement. Let’s spin the wheel and see who’s inking this month… Ladies & Gentlemen, it’s Klaus Janson! Is this their first collabo? I’m not sure. Janson will come to be the guy who knows John’s line the best, but this is early days, so it’s not quite the synergy it one day will be. Anyway, Spider-Man is visiting Black Cat in the hospital when he says has to go do something if they’re going to have any kind of future together. And that thing is…

Spoilers: he will not. Then there some comedy business with Peter trying repeatedly to get the dean to sign his form, and then, after the dean is really rude to him, webbing his office door shut, and Peter is out of college. For now.

MJ is scared off of their lunch by this talk, but Liz is undeterred. Well, until they get to Harry’s office and find it ransacked, that is. Then she’s pretty distracted. Soon, Spider-Man is on the case. He reads about the break in in The Bugle, and even though the MO feels wrong, he’s sure it’s Hobgoblin. So he drops in on Jean DeWolff.

Think real hard, Spidey, and you’ll get there. He’s still contemplating it when the cops get word of a firefight at Peir 3, where there happens to be an Osborn storage warehouse. Spider-Man gets over there as soon as he can. He sneaks into the warehouse and attacks the goons inside.

But then a figure in a nearby truck throws some of Hobgoblin’s razor bats at Spidey and the goons alike, so our man knows he’s on the right track now. The guy in the truck tosses a pumpkin bomb at the warehouse, forcing Spider-Man to save the goons inside, but not before getting a tracer on the Goblin’s truck. He saves the goons as the semi truck smashes through the police barricade. But as soon as it’s out of sight, the truck ejects a van out of the trailer and it drives away. Pretty slick escape plan. Back at the fire, all the goons have the same story: They didn’t even know what they were stealing, only that the guy in the truck, a small time hood named Lefty Donovan, did. The cops think Donovan isn’t normally one to pull off something this big, but Spider-Man ast least has a name to chase now. Surely it’s not that easy!

Yup, Lefty’s just a goon. Green Goblin’s power came from a chemical formula, and Hobgoblin is trying to reproduce it.

Never! In the letter page, people are reacting to ASM 239, the 2nd part of Spidey’s first encounter with Hobgoblin, and they have a lot of thoughts:

A lot of candidates! Are any of them right? I’m still trying not to spoil it if I can, so no comment from me. But I bet none of them could predict how long they’d be waiting to get an answer…