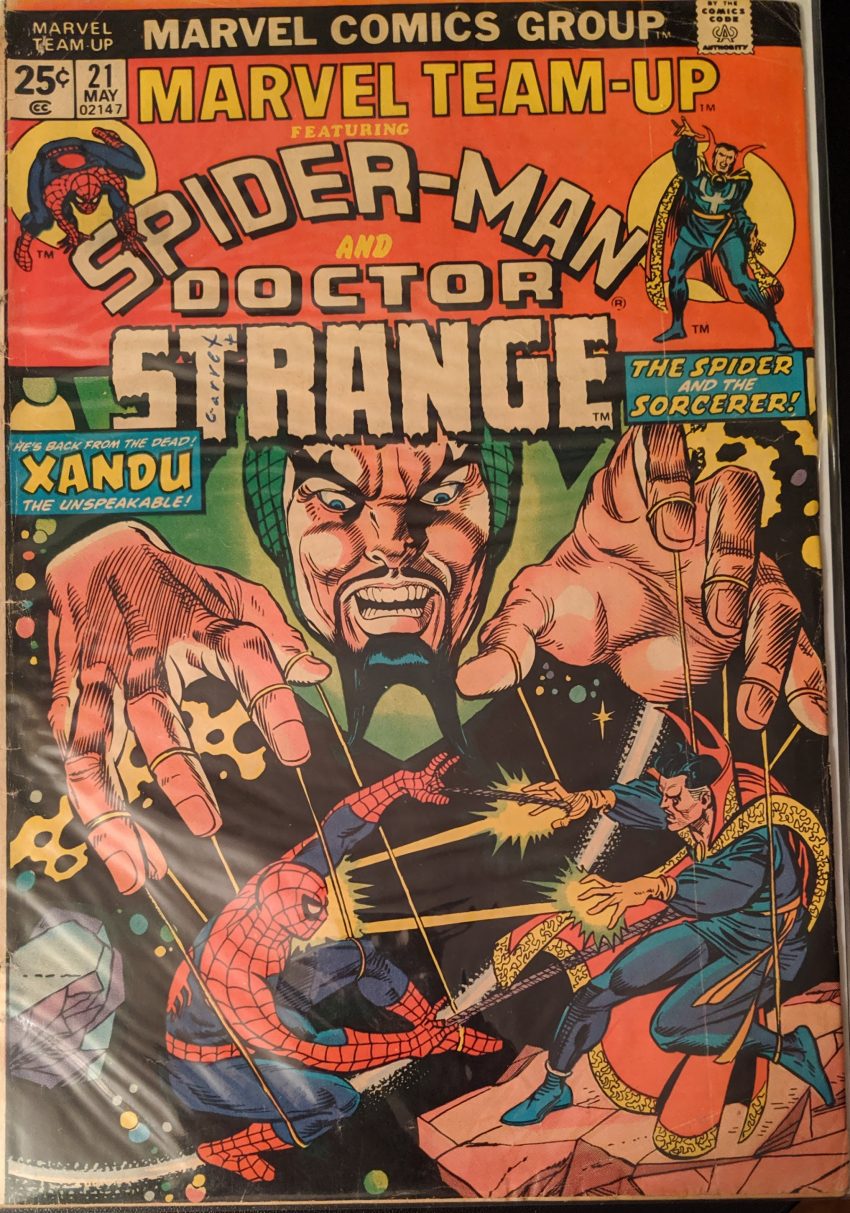 Guys, he’s back from the dead! I do not know Xandu The Unspeakable, but he’s back! Same creative team as last issue, except Dave Hunt replaces Mike Esposito. Things get rolling with Spider-Man happening upon a mugging. He dispatches the attackers with ease, but then things get weird.

Uh-oh. Why, that’s none other than Xandu the Unspeakable. Now that he’s enthralled Spider-Man, he sends him to steal “The Crystal of Kadavus” from Dr. Strange’s house, and tells him Dr. Strange is his sworn enemy, too. He teleports Spidey right into Strange’s house. Strange is busy meditating on the texts of The Ancient One, so he doesn’t notice at first, but then Spidey knocks over a table. Very smooth!

Ye Olde Two Heroes Fight Over a Misunderstanding done in a slightly different way. It is appreciated that Wein put a spin on it, even if it’s not spinning too fast. As they battle, Strange only tries to keep the obviously abnormal Spider-Man at bay, trying to figure out his deal. Which proves a mistake.

Our hero appears in Xandu’s lair or whatever, Xandu himself having switched into his wizard gear. He says this will help him regenerate The Wand of Watoomb, and then talks about how he came back from the last time Strange & Spider-Man defeated him, which was apparently in Dr. Strange #179. Strange, I guess, wiped Xandu’s memory of their last encounter, but Xandu did some wizard stuff to “send his memory reeling off into the ethos.” So he wandered around homeless for awhile, but then his mind zipped back into his head. So… he wasn’t dead, then. Not even “dead.” Just… homeless. Well, whatever. But wait, there’s more flashbacking to do:

Xandu teleports all of them to… well he calls it “Xandu’s dimension,” but it’s just an attempt at a weird Steve Ditko Dark Dimension kinda thing. Being pulled to this place snaps Spider-Man back to consciousness, though, so now Xandu has two enemies to deal with.

Still not going too well, though. Spidey & Strange keep trying to catch him off guard, but Xandu’s claims to make the rules in this dimension seem to be true, and he keeps redirecting their attack back and them while growing bigger and bigger. Strange secretly casts a spell on him and Spidey, so that the next time Spider-Man tries to web Xandu, he instead shoots magical blasts from him hands. He’s pretty shocked.

Who is Flaming Blue Hannah, anyway? These flipped projectiles throw Xandu off badly enough that Strange is able to web up his whole head, and then he gets Spider-Man to hit him again.

Without the wand, Xandu is no match for Dr. Strange. Strange sets the Wand to floating through Xandu’s weird realm, hoping no one will ever find it (That sure doesn’t work out), and then teleports the whole gang back to Xandu’s place. Xandu upset that Strange has stolen his only means of awakening Melinda, and being the swell guy he is, Strange tries to do it for him.

Well, that’s a downer. But that’s how this one ends. And also: Marvel Value Stamp intact!