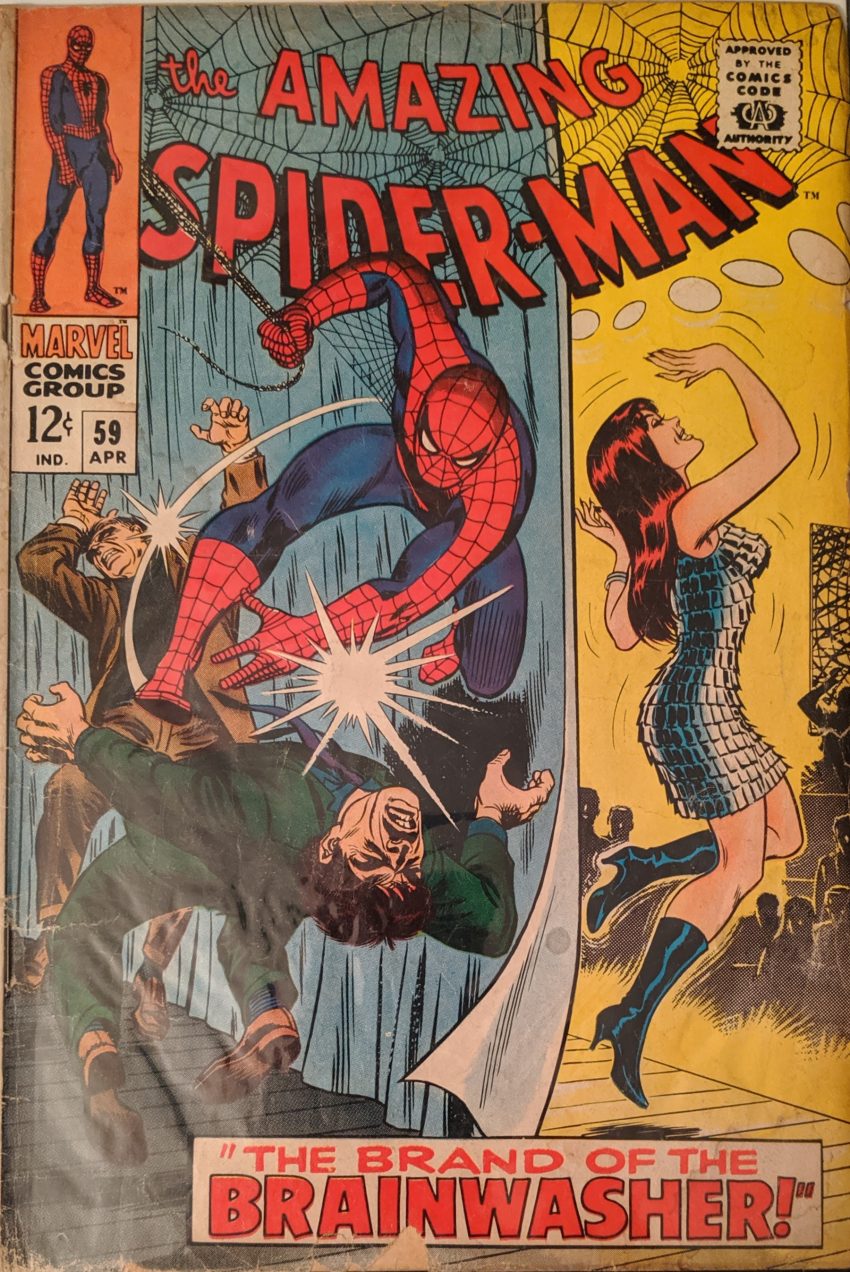 There’s MJ’s iconic disco ball dress. That seems to be one artists remember when they draw her even today. Comic book collecting is such a silly business. This issue’s big selling point on the collector’s market is it’s the first appearance of Mary Jane… on a cover. Technically she had a couple teasing cameo appearances under Ditko, and then we saw her first real appearance in ASM 42. But this is the first cover with her on it, so that’s a selling point. I guess? I guess if you buy these things to jam in a plastic case and treat like an object and not a comic book. Anyway. Off topic. Inside the comic, Spidey has refilled his webshooters and is on his way to Aunt May’s side when the cops find him. He has to web up a whole bunch of them and flee. He gets to the hospital, briefly steals a patient registry and learns Aunt May’s room is on the top floor. He crawls up there, changes clothes in a janitor’s closet, and finally reaches Aunt May after all these issues.

This is Dashin’ Don Heck’s 3rd issue pencilling over Romita’s layouts, and to his credit, sometimes you wouldn’t even notice. Consistency was prized in this period, so being able to make it look Romita-y is important. Also: I think Aunt May’s thought balloon in the 3rd panel was supposed to be spoken. This is an awkward way for Peter to meet Gwen’s dad, him trying to defend Spider-Man against the accusations of Peter Parker. He tells the cops Spidey kidnapped him because he’d lost his memory, saw Peter following him and thought he was an enemy. But once he got his memory back, he beat Doc Ock and set Peter free. Not a bad story, really. Something more pressing suddenly comes in at the precinct, so they let Peter go, and George Stacy walks him out.

“Hey, you don’t know me, but come over to the house and watch my Spider-Man movie collection.”

And there, suddenly, is their first real display of affection. This was a pretty crucial sequence. Pete sits down to tell the gang his story about being kidnapped, and asks where MJ is. He’s informed she got a job as a go-go dancer at the Gloom Room A-Go-Go (1968!), and we head there to learn her new boss happens to be… The Brainwasher. She has no idea, of course, but his goons tell him she doesn’t suspect their operation. MJ’s job is to dance and take free photos of patrons, but what she doesn’t know is the camera somehow has “a certain hypnotic quality” that will enable them to control people. The fiends! They’re gonna invite various city officials to the club to get them under their spell. Good plan if it works. The next morning, a very happy Spider-Man is swinging around, thinking life would be perfect if the cops weren’t after him, when he sees some goons knocking over a savings and loan and does his thing.

Seems like it could! Back at the club, MJ is… I guess practice dancing?… for tonight’s grand opening. The goons remind her to only take pictures of people at tables with a star on them, and if she thinks anything weird is going on, she doesn’t say so.

That is one crazy thing to say, buddy! When MJ gets to the part of the show where she brainwashes people, she comes down off stage to do her thing, and even Gwen compliments her on her dancing. Then she goes ‘round making various city councilmen and Captain Stacy feel woozy and confused with her camera, and still doesn’t think anything weird is up. When Captain Stacy feels he needs some fresh air, he instead wanders into the back of the club, as he was brainwashed to do. But he’s fighting the effects, and has to be restrained.

Spidey takes out a couple goons, but one of them hits an alarm, so when he gets into the place, it’s swarming with still more goons for him to fight his way through. And he’s doing just that when Mary Jane wanders into the battleground to deliver the camera. One of the goons takes her hostage.

The Kingpin! It’s rather awkward to briefly give him a 2nd supervillain name, but I guess it kept up the suspense for awhile. As always, it’s fun to think about whether MJ could know his secret, and as is often the case, she’s awfully cavalier about being involved in Spider-Man action here. Stan obviously intended it to be more of her unflappable attitude, but it makes more sense if she feels she knows and can trust the man in the suit.