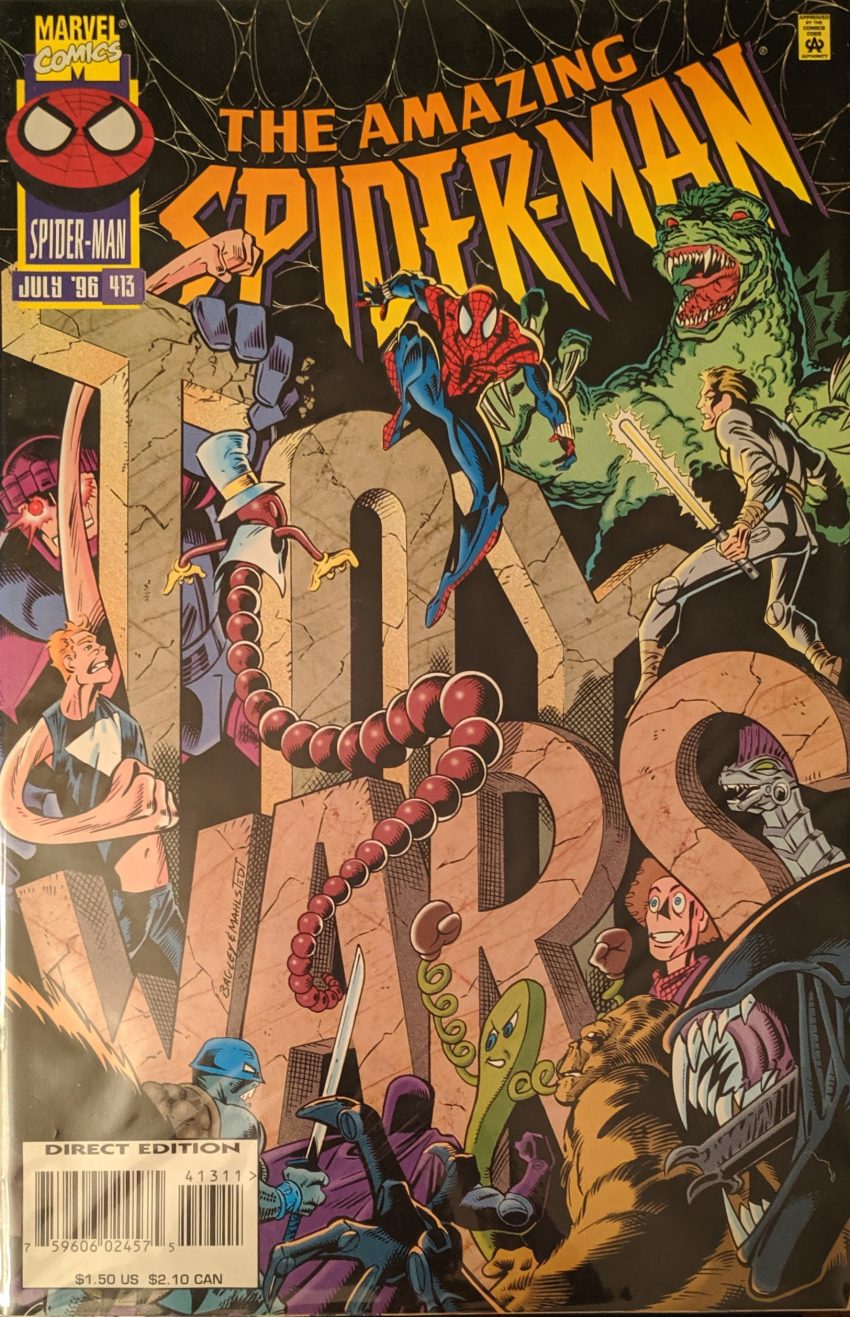 ASM is still produced by Tom DeFalco, Mark Bagley, Larry Mahstedt & Bob Sharen in this period. This issue opens with Spider-Man waking up in pain and panic to find himself apparently shrunk down very tiny and trapped in a jar being held by a 3-year old. That’ll really mess up your day. He has no idea how he got here. Then the child gets bored with him and throws the jar on the bed.

(We’ll see that Mysterio story sometime) Yeah, you’ve never fallen for one of Mysterio’s illusions, and no villain has ever broken out of jail without you knowing. Airtight. Also, it is getting really irksome reading these terrible “I’m Peter Parker, but I call myself Ben Reilly…” things. Why complicate the issue? Anyway, as he’s trapped in a jar, Ben is late for work at the newly reopened Daily Grind, where his boss, Shirley, drawn totally unrecognizable by Bagley (Is this his first time drawing her? I don’t recall), is visted by a man with some scars on his face named Garon.

Dun dun duuuun. We pause now for the shock of the year. For me. This comic clearly had something bound in. Given its vintage, I assumed a trading card. No.

I have just discovered a 23-year old packet of Kool-Aid in this comic. I’m sure I left it here because taking it out would lower the value of the comic. That’s how it works for other things, but I’m not so sure about this one. Unlike, say, the “Tattooz” temporary tattoo bound into ASM 238, this Kool-Aid doesn’t seem to increase the book’s value after a short internet search. Should I drink it? I don’t think I’m going to. Anyway, Spidey kicks out of his prison jar, when he is attacked by trademark infringement:

Not a bad Godzilla, Bags! Soon, Spidey is being attacked by just-barely-not-actionable Ninja Turtles and a totally actionable Xenomorph from Alien, while Peter Parker goes to work.

Phil Urich there has recently very, very awkwardly become a heroic new Green Goblin. I think his comic is already cancelled by now. Meanwhile, we finally see what’s behind this nonsense, and as you could probably guess, it’s…

…these losers again! Mysterio back in the bubble ASAP! It may be the 90s, but some traditions should be upheld, and one of them is the fishbowl. Mysterio helpfully tells Armada how they were put in the same holding cell after their last dopey adventure and one of Armada’s robots busted them out. This is the height of terrible exposition, one guy telling another guy stuff he already knows, and it really has no place in a comic of this late vintage, but that’s Tom DeFalco, I guess. As Mysterio exposits, Spidey fights barely masked version of DC hero The Elongated Man and Buzz Lightyear (Furthering my suspicion that this entire issue was caused by DeFalco seeing Toy Story), and Armada is only getting more upset that his robots are getting beat up, so Mysterio turns it up to 11.

Goofy, TV’s Gargoyles and Street Sharks join the parade of intellectual property violations no one would have the guts to make in our day. Spidey punches through them, a Power Ranger, Gumby and more while thinking he’s never felt more alive. Then he punches one of Armada’s dumb robots right out of The Juggernaut’s head and begins to suspect what’s going on. I have always wondered, would there really be toys of Wolverine or Juggernaut in the Marvel U? Captain America and the FF, sure. Spider-Man, too, maybe. Wolverine? Aren’t the X-Men underground? There was a period where they were literally invisible to cameras for some reason. How many people really know about them? Anyway, when Spidey destroys “Laurie,” Armada loses it. Mysterio says it was only a mechanical device.

Sure, man, whatever. Mysterio vanishes into the mist, but Spidey just runs around punching until he hits something. Really. And that’s how he and Armada learn “Mysterio” was just a robot. Spidey webs Armada up and says Mysterio is “always good for a few laughs” as a segue to this thought balloon which makes no sense at all:

Peter Parker hiding a deadly illness from his pregnant wife? What a novel idea that we totally didn’t see play out over the last block. This issue really feels like the filler it probably was, considering the Spider-Office had abruptly been told The Clone Saga was not allowed to end during the X-Men’s Onslaught event (Which will invade the Spider-Titles very soon), forcing the previous block’s “Blood Brothers” crossover not to tie everything up. Gotta get 24 pages of something out the door in a hurry. What a mess.

Elsewhere in this issue, the “grim’n’gritty” 90s claim their newest victim in the form of What If?

What If? Started out as a fun series asking questions like “What If Spider-Man Joined The Fantastic Four?” or “What If Jane Foster Had Found Thor’s Hammer?” By the 80s relaunch of the title, it had already gotten pretty darn grim’n’gritty. It seemed like the answer to any question posed by the cover was “Everyone is sad and then dies.” I have several of those (Mostly Spider-Man-related, you will be shocked to hear), and topics as diverse as “what if Spider-Man had bonded with the alien symbiote?” and “what if Spider-Man had married The Black Cat?” all end with nothing but pain and suffering. I can’t imagine how much darker it could get. But it’s the 90s, so they must find a way!