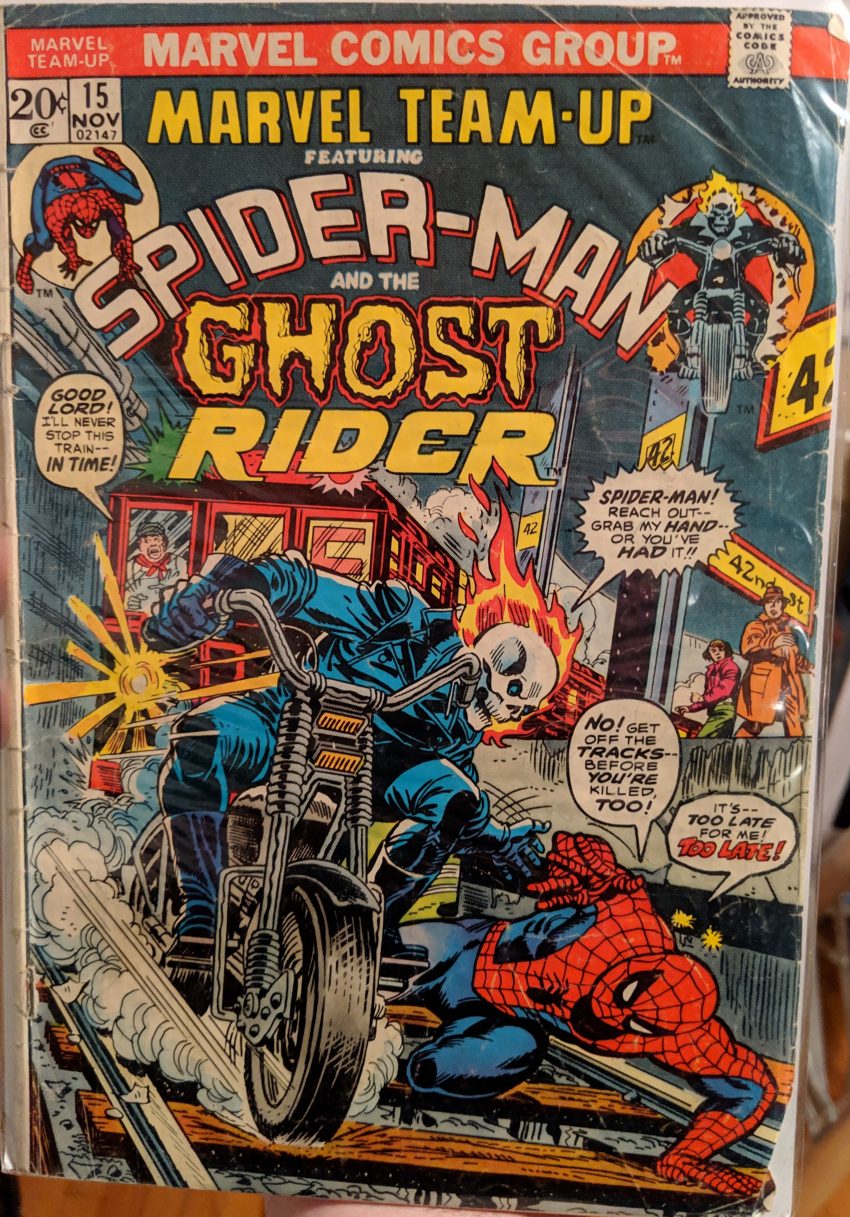 This is one the 75 issues of Marvel Team-Up I got for $48. That huge box contained brand-new looking comics, badly beaten comics, and everything in between. This one’s been through it. Pretty ragged covers, almost every page dogeared. But it’s readable, so here we go. Len Wein, Ross Andru and Don Perlin still on deck. Yes, Andru is drawing both Spider-Man titles for the moment. These days a comic book artist can’t do 8 issues a year, this guy’s doing 2 per month. Of course, he had inkers to finish up the work as he cranked out the pages, whereas most current artists do it all, so you know. Spidey’s string of supernatural team-ups continues with Ghost Rider, here a pretty new concept who’d only just gotten his own series.

Why does MJ look shocked if this was her idea? Yeah, man, Ghost Rider, the superhero who also performs a stunt show. A pretty unusual setup. Peter thinks he really needs to wind down after that business with The Kangaroo, so he’s actually grateful to MJ for dragging him out. Has he turned a corner, or is Len Wein just not writing him as tortured as Gerry Conway? We’ll see. Ghost Rider does his show, and Peter’s pretty into it.

Ghost Rider jumps his motorcycle over the other four to thunderous applause from the audience, including a smiling Peter Parker, when a whole 2nd gang of motorcycle weirdos shows up.

Well, that seems like trouble. As The Orb circles the arena, every audience member he looks at goes into a kind of trance, including MJ. Peter’s Spider Sense saves him, though, so he’s able to web up into the rafters and become Spider-Man. Down on the floor, The Orb has scooped up Roxanne Simpson, one of the riders in Ghost Rider’s group and his love interest, so it’s personal now. Ghost Rider starts zapping the Orb’s goons with his hellfire, trying to clear a path.

Spidey and GR are catching up to The Orb, so he commands his enthralled audience to walk into the arena, cutting GR off. Spidey swings over them, but Ghost Rider shoots him down, saying Roxanne is his responsibility…

That’s wacky. A hostile takeover of a motorcycle stunt show? Elsewhere, The Orb wakes Roxanne from her trance and reveals he’s her father’s one-time business partner. Her now deceased dad owned the show before she did, but The Orb (né Drake Shannon) reveals he actually won it from him in a race. But in that same race, Shannon’s motorcycle crashed and he was injured, so he’s had hard times since then, and now he plans to get his motorcycle show back.

Couldn’t draw that in the 60s! Then Ghost Rider shows up with the papers in hand to sign the stunt show over to The Orb, and he totally does, he’s being very nice about all this. So it’s especially crappy when The Orb orders his men to kill GR and Roxanne, anyway. Unfortunately for the bad guys, this is a Spider-Man comic.

Spidey and GR wrap up the goons, but The Orb escapes with Roxanne. GR goes after him while Spidey webs up everybody else. Peter Parker used to own a motorcycle, so he’s actually not unfamiliar with them. Therefore…

As the chase winds up out of the tunnels and into the street, Spidey & Gr have a plan…

Spider-Man gets Roxanne to safety while Ghost Rider continues the chase.

He did say he wasn’t wearing a mask, but it was a while ago! Get with it, Spidey. GR would go on to appear in 2 more issues of Team-Up over its run, but as luck would have it, I don’t think I have either one.

Folks in the letter column seem to prefer Jim Mooney to Gil Kane. And in ASM, when Kane was on it, people wrote to say they liked him better than Romita. You can’t please everybody. One particularly delusional missive says Mooney’s better than both Kane and Romita, and that he “IS Spider-Man!” Wow, dude. That’s nuts. But that guy will be happy as Mooney continues to pop up in the Spider-titles throughout the 70s & 80s.