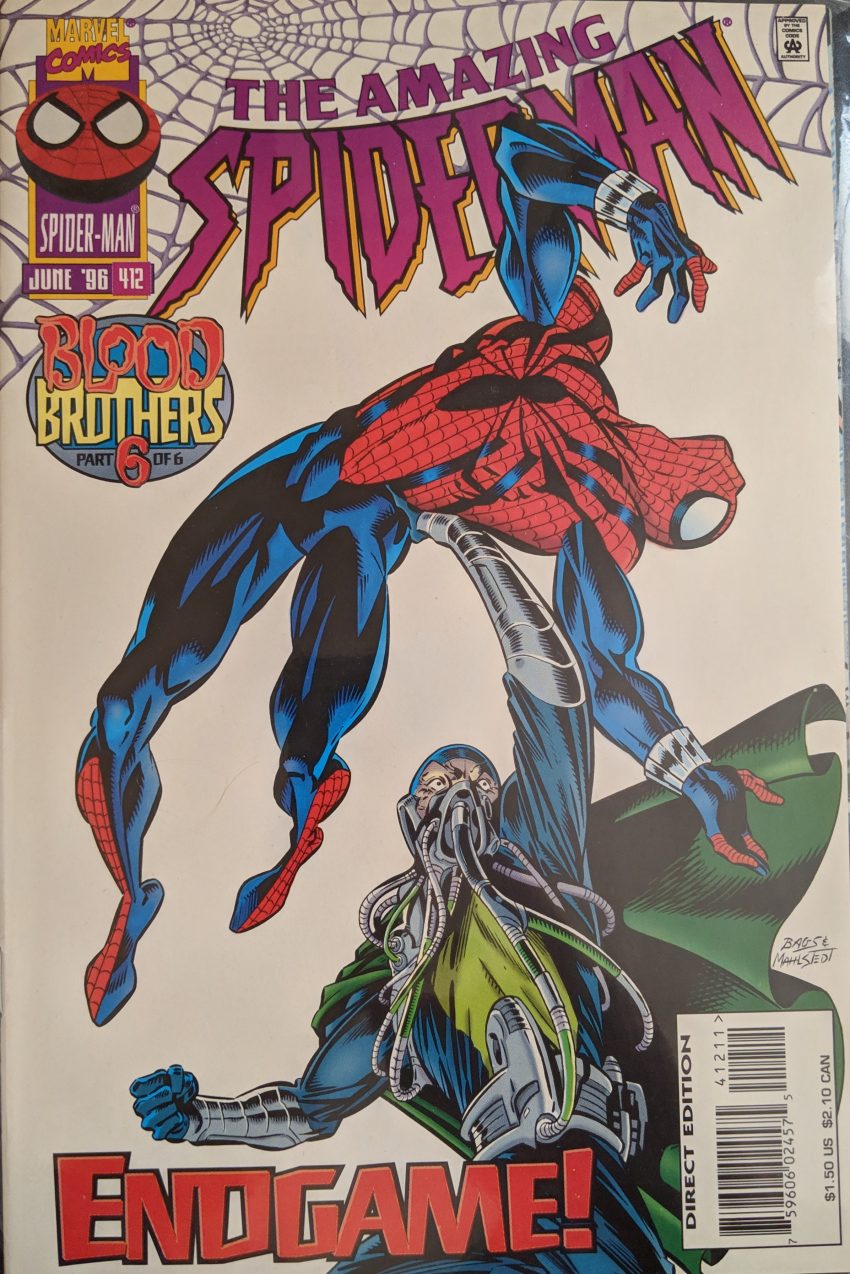 Alright, let’s wrap up this story that was supposed to wrap up everything but instead wraps up nothing! The invasion of the generic armored enemies has put Molten Man and Spider-Man on the same side. Spidey recaps things while dragging Peter Parker to safety, since his dumb ass is still trying to be a part of this with no superpowers or training now that the lasers are flying.

We cut to MJ visiting Liz and little Normie, as Liz confides in her that something bad seems to be going on with Multivex. Then we go back to the fight.

The devil, you say? Who could that be? I’ll tell you right now: the answer sucks! Spider-Man sneaks back into the fray to try to talk to Trainer while MM battles the still-unnamed bad guy, but then Molten Man gets thrown right into Spider-Man, and the hero actually starts fighting the villain.

Elsewhere, Peter Parker is… I dunno, wandering down some random hallways, thinking he’s stupid for doing this (correct!), when an announcement over the PA says it’s time for recess. Oh, sorry, says that they have Mary Jane. Yes, pregnant, powerless MJ just walked right into the Multivex compound to “try to warn Peter & Ben,” and got caught. I begin to think everyone in this comic is an idiot as the villain’s name is finally said by somebody.

Could it be Harry? It could’ve been Harry. It was Harry to begin with. But it’s not now! Spider-Man 1994-1996 is an endless nightmare for reader and creator alike.  The fightin’ continues, Gaunt saying his employer (“Another former acquaintance!”) has instructed him to keep both their identities secret while gassing Spider-Man into unconsciousness.

Do you know what’s happening? I bet you do.

And it is once again fightin’ time. And fight they do until a stray blast hits the controls for the whatever-it- is machine. Naturally, the generator is now going to explode, so everyone starts running in a panic, good guys and bad guys alike.

Feels like there’s a lot of word balloons accidentally joined together in this issue, making people have conversations with themselves. Also, any time someone says the phrase “Oh, God,” it’s written “O , God.” With the space for the “h,” but no “h.” Why? Who knows? Speaking of, that’s what Spider-Man says as the facility explodes with Seward Trainer theoretically still inside. As the heroes stand outside being sad, Ben wonders if Trainer was trying to help or hinder the machine in the end when he definitely died for sure.

Booooooooo! Throw things at them! Yes, the true villain of the piece is Talks With His Hands Man. Actually, that would be better. According to the lore, this story was originally the end of “The Clone Saga.” Gaunt would be revealed as Harry Osborn, not as dead as advertised but not really alive, either, and behind the whole thing. Peter’s real, Ben’s the clone, Ben dies, MJ has a miscarriage and she & Peter split up, the end. But then Bob Harras became Editor-in-Chief at Marvel. Prior to that, Marvel had been running in a very weird way, the company split into fiefdoms based on their big properties, each with their own E-i-C, so Spider-Man boss Bob Budiansky didn’t really answer to anyone editorially. When that changed, he was told to stretch this story that had already gone on way, way too long another 6 months. The X-Men event Onslaught was happening, and Harras didn’t want the end of the clone mess to compete with it. And he said Harry couldn’t be the villain, either. Thus, Gaunt is someone else, and is shown answering to someone else, and who either of them are is still open for debate, because as this issue was published, it hadn’t even been decided yet. Can you imagine working under these conditions? Writing stories without even knowing who’s in them or what they’re about? What an unmitigated disaster this was. And some demented souls say this is the best ever Spider-Man. But now they got 6 months to figure it out while spinning their wheels, so that sounds fun. Come back next time to pick up on a dangling plot thread.