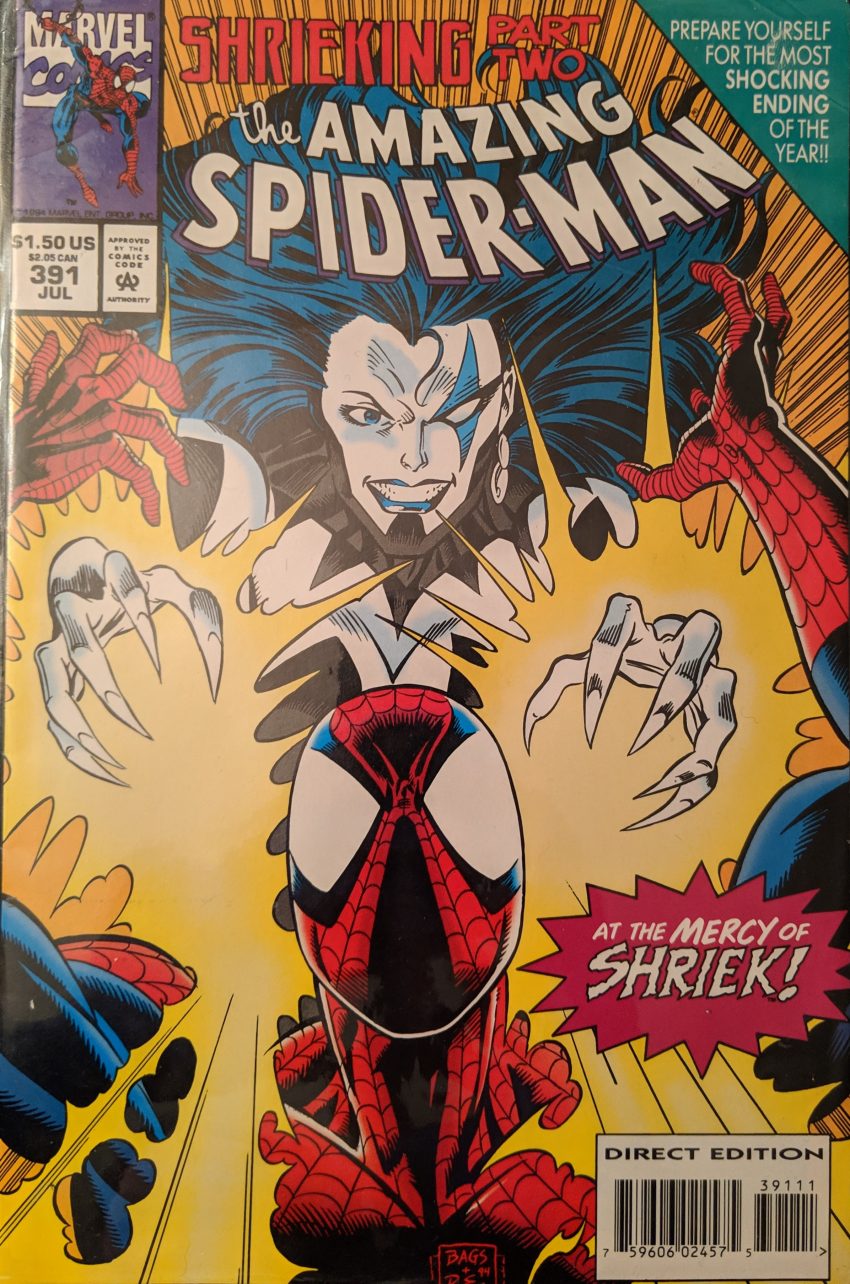 John’s mad because Ravencroft was forced to open before it was ready, and he thinks this is the result. Incorrect! This is the result of Dr. Kafka doing something monumentally stupid. But, too late to point fingers now. As he lists all the reasons the facility isn’t ready yet, Spidey pulls a Batman on him and vanishes.

So deeply hurt by recent events that he’s willing to abandon his life as Peter Parker and just be the mask, we’re told. I just… call bullshit. This is Spider-Man, man. Shouldering the pain of tragedy is his whole deal. After all he’s been through, and all he’s lost… And I guess this is unfair to you, dear reader, not knowing what he’s reacting to yet (If you don’t)… but I just don’t buy this. He made it through losing Gwen without trying to abdicate his role in his own life, and he’s got a better support network AND the benefit of maturity now, and yet his feelings are just tooooo hurt, so it’s time to abandon his friggin wife and punch bad guys until he dies of starvation and sleep deprivation, I guess. Ugh. This is character assassination. This is an egregious betrayal of everything the character stands for. And not the last, either. We see Beatrice McBride driving around, desperately looking for her son. He’s still with Shriek, who is trying to abuse him into becoming Carrion again.

Yay. Out in Queens, MJ has gone to see May, who’s trying to put on her usual brave face, and MJ calls her on it, saying she’s trying to pretend nothing bad has happened and bottling it up, refusing to feel anything.

Fully deserved, MJ. Aunt May is a real one, unlike her nephew at present. Elsewhere, having gone into a house and killed its occupant, Shriek continues to beat up Malcolm while pretending to be his mom, saying again that he’s all she has left and she loves him. It’s all really silly. He says if she loves him, she’ll let him go. She’s about to fly into another rage when she gets webbed and slammed into a wall.

Fun times. Shriek begins crying and yelling things like “mommy don’t hit me anymore I’ll be good” to lower Spidey’s guard and the belts him across the room. She says she’s learned a lot about her sonic powers while she’s been locked up, even learning to create a “sonic buffer” that let her deflect Spider-Man’s punches. She’s on the verge of Basilisk “can do anything eyebeams”-level powers, here. What’s up out in Queens?

Uh-oh. Aunt May, whose ill health hasn’t been used as a tired plot device in awhile as of this issue, I’m happy to say, seems to be back on her bullshit. Bit of a hint at what caused all this there, but vague enough that I’m still not spilling the beans. How long can I hold out? I don’t honestly know. I feel like, if they do force my hand, I’ll just go back and rewrite a bunch of this and no one will ever know. So if you’re seeing this, I win! Elsewhere, Shriek is deciding maybe she can push Spider-Man so far into the darkness that he can be her new man when she realizes that’s what she needs to do to Malcolm to make him Carrion again. She’s got ill-defined psychic powers, too, so she hits him up and…

Ugh. Also: yikes! Also, we already saw it, but:

Saviuk did a pretty good copy of this. Could I have shown it here first? When you see the rest of this story… I just don’t know how. Come back next time to see some of what I mean.