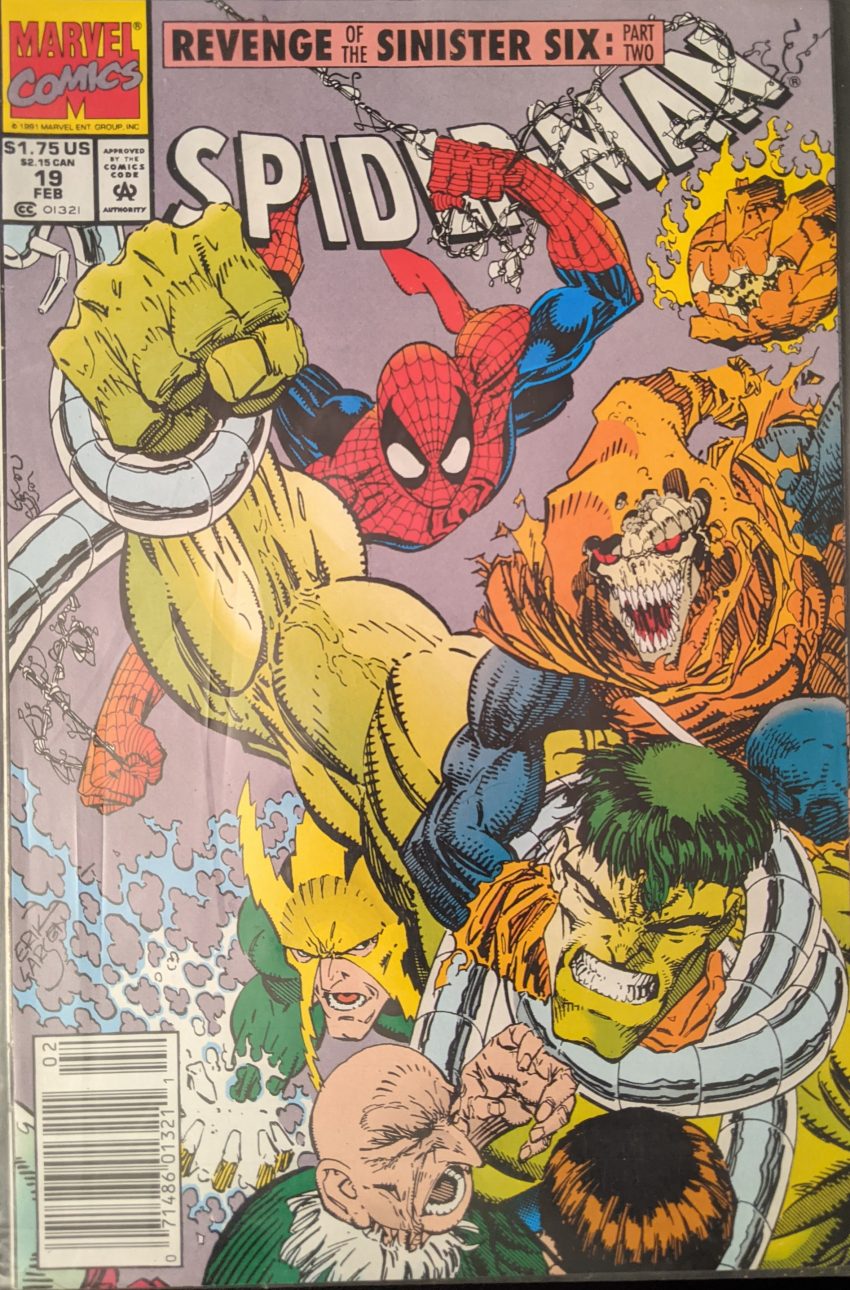 Hulk! This issue starts a bit of controversy, believe it or not. Larsen credits the others as “Letter Artist” and “Color Artist” this month, a fine choice of words that should be far more common. So, Spider-Man knows he and/or The Sinister Six are being watched, Ock tells his former cohorts to join him or die and begins whupping them for choosing “die,” and Sandman says Ock is going to pay.

Spidey’s doing his best as usual, but then Hobgoblin hits him with his true archenemy. And not just any gas, the original Hobgoblin’s formula that knocks out our hero’s danger sense! Uh-oh, The tide starts to turn, and Spidey tags Hobby with a tracer and decides to beat a retreat. Very quippy. This is the time when Hulk and Banner merged, becoming a Hulk with Banner’s intelligence and personality who never changed back to human. Have we seen this version already? Who can recall? He’s also currently working with a group called “The Pantheon,” and while he chooses not to tell Spider-Man, their precog has foreseen Ock taking over the world and sent Hulk to stop him. Hulk seems to be turning the tide for Spidey, but no Spider Sense means…

Hulk takes down Hobgoblin and is trying to sneak up on Ock and save Spider-Man when Electro fires a blast that casts Hulk’s big shadow on Ock, derailing his plans. Ock tosses Spider-Man through a wall (Way through a wall, off into the harbor), while grabbing Hulk by the throat. Hulk expects this to be the usual supervillain business, making jokes about Ock telling him his plans, and Ock proceeds to just beat the hell out of him.

Electro is a fink! The whole thing’s rigged. So, by this point, Peter David is well into his 10-year run on Hulk. And he does not take kindly to his guy being totally destroyed by Doc Ock at all when this comes out. Larsen had Hulk basically take down the rest of the Sinister Six without even paying attention, and even went so far as to have Ock explain in detail why Hulk can’t fight back, in what seems to me to be an effort to show he’s not just being jobbed out here. But David wasn’t having it. He will get Ock into the Hulk comic relatively soon so he can restage more or less the same fight and have Hulk demolish Doc Ock. It’s pretty petty, but petty seems to be a big part of David’s repertoire. At any rate, this was a short installment, that’s because Erik Larsen’s house burned down in the great Oakland fire of 1991. He lost everything, but was luckily unharmed. So they decided he would do what was to be the 2nd chapter of this story in 2 half-issues, while backups were created for the back halves to give him a breather. These days, either production would halt entirely and the books would just be late or a different artist would be brought in, but back then, the trains had to arrive on time. Thus, the rest of this issue is part one of a 2-parter by Terry Kavanaugh, Scott McDaniel, Kieth Williams & Renee Witterstaetter. And it begins with Peter taking MJ’s photo with a pretty bizarre backdrop:

Those are some pretty weird “religious icons.” I think one of them might be Ultraman.

Spidey cuts in between the guy and his bride playing jealous, but really trying to find the source of his danger sense, and can’t. As they leave, the statue half in a crate develops more organic eyes and watches them go. This is, of course, all leading up to oddball classic Fantastic Four villain Diablo, but I confess, I don’t remember it. Has he been on the blog? Man, I feel like he has, and yet he has not. I guess it’s easy to get confused. Later that night, Spider-Man returns to the museum to investigate. His Spider Sense is going off even before he gets inside, which is accomplished with a surprisingly long sequence of him almost smashing a window, seeing it’s alarmed, heading to the roof, climbing into the ventilation system, ending up in the lady’s bathroom, and then almost getting caught by security guards. 4 pages of not much actually happening is weird, but perhaps a function of this being a rush job. On a 5th page, he eventually gets back to the hall just in time to see the statue from before smash out of its crate.

Why Larsen’s break is far cleaner than this one when his was a response to unexpected misfortune and this one was planned is beyond me. That’s really awkward. But we’ll see the end of this along with more Sinister Six next time.